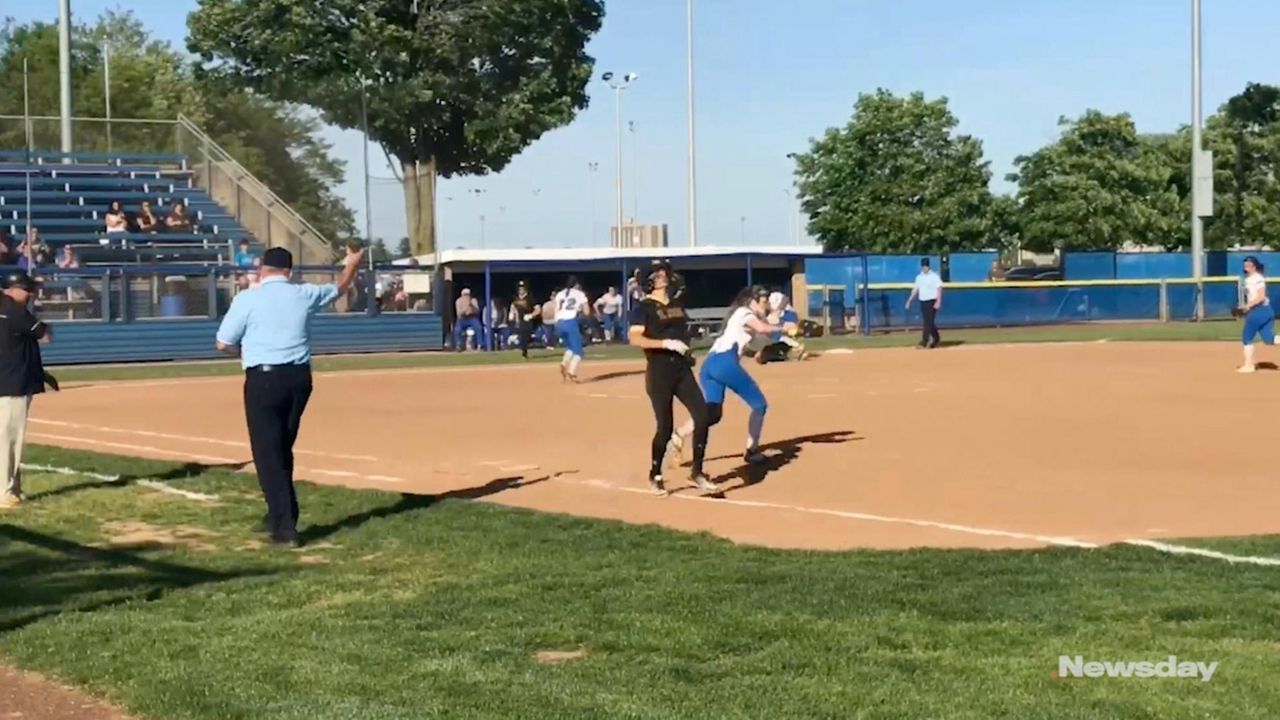 It’s a situation the St. Anthony’s players and coaches say they work on every day at practice, but none of them expected it would deliver the softball team a championship.

With the bases loaded and one out for Kellenberg, St. Anthony’s pitcher Erin Steinert fielded a bunt, threw home for a forceout and catcher Ava McGee threw to second baseman Sofia Licata covering first base to complete the double play for the game’s final outs in the second-seeded Friars’ 3-2 win Tuesday at Hofstra to claim their third straight CHSAA championship.

“I knew I had to get one before you get two and no one was scoring because I got them at home,” said Steinert, who tossed a complete game. “But I just wanted to secure one before [madness] broke loose if we didn’t get one out.”

“Erin’s a great athlete,” coach Mike Massa said. “She was quick to the ball and Ava made a great throw. It was a great way to end it in a tight game against a great team.”

St. Anthony’s (15-5) advances to the CHSAA state semifinals Tuesday at 2 p.m. at Preller Field in Queens against Moore Catholic, which defeated the Friars in last season’s state championship game. With a win, St. Anthony would play in the state final Tuesday at 5 p.m. at St. John’s University.

When top-seeded Kellenberg (17-5-1) loaded the bases with one out in the seventh, Steinert admitted to feeling some nerves. But she trusted her team to make the play, unbeknownst to her that she would be largely responsible for the final outs.

“We had a couple bases loaded moments last time again Kellenberg and honestly, I’m not worried,” Steinert said. “Our defense has been so solid the past couple of games that I knew I would get a ground ball or a pop fly and they would make the play.”

With the score tied at 2 in the fifth inning, Jess Roberts delivered a single up the middle, driving in Alyssa Seidler with the go-ahead run for St. Anthony’s.

Kellenberg opened the scoring in the first inning with Caroline Bratichak’s groundout driving in Stephanie Conrade. St. Anthony’s responded in the bottom of the inning with Steinert’s single driving in Taylor Zatyk. Zatyk scored on a wild pitch in the second inning to give St. Anthony’s a 2-1 lead. Katie Hand’s RBI double in the third inning tied the score for Kellenberg.

The Friars have dealt with injuries throughout the season, including losing their starting catcher for the year and Seidler, who was slated to be the primary pitcher, for the majority of the season.

“We all said this is a little bit sweeter because most people counted us out,” Massa said. “We had a little rough going at the beginning of the year. We had injuries and moving players a lot trying to find a set lineup and when we finally did, Erin started finding a groove and getting a little stronger and we started to settle in.”

One of the players who filled in well was McGee.

“No one gives her enough credit,” Steinert said. “She’s kept me in it the whole time. She’s a little sophomore and I’m a senior and she really took control and has kept me calmed down.”

And with the Friars two wins away from their first state title in program history, Massa said, St. Anthony’s will return to practice and work on the same plays that proved pivotal Tuesday, and could again next week.

“We do that play every day at practice over and over again,” Roberts said. “And you never really think it’s going to happen in a game. And it did. And that’s what decided our championship.”