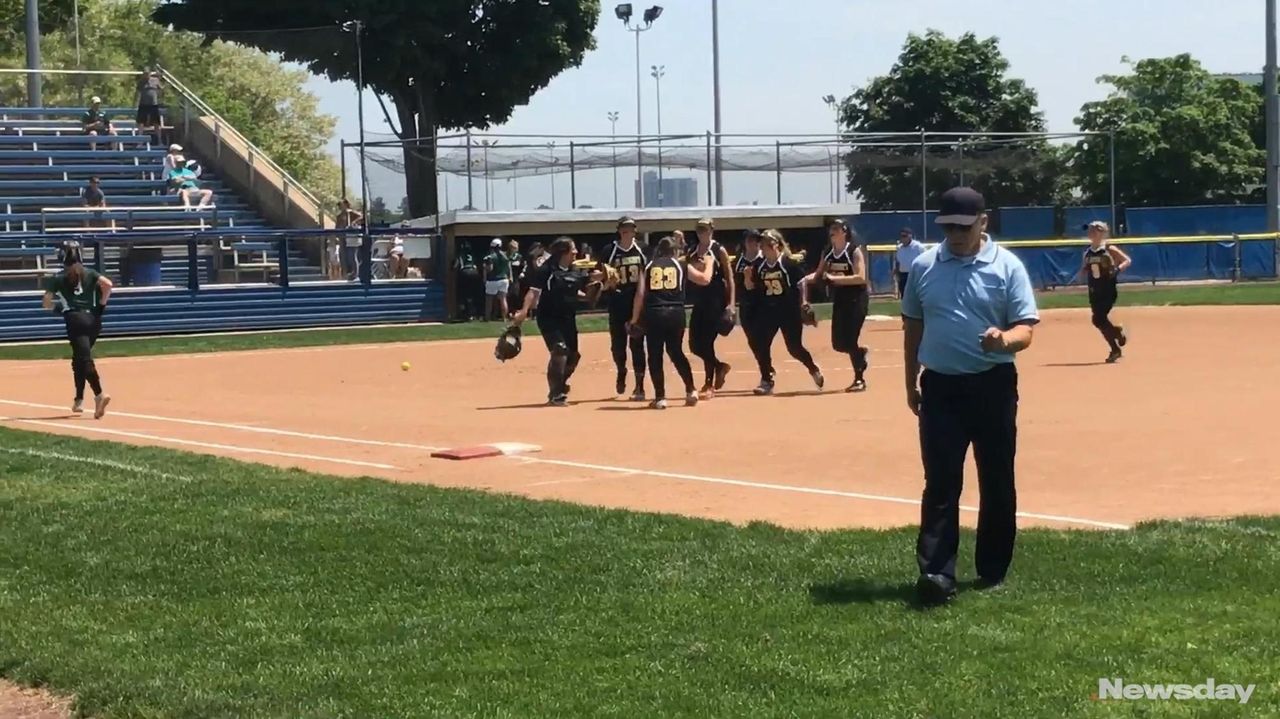 St. Anthony's defeated Nardin Academy, 2-1, to advance to the CHSAA state final, at Hofstra on Tuesday May 29, 2018. Jessica Roberts threw out the tying runner at the plate in the win. Credit: Newsday / Owen O'Brien

Kayla Daly, one of the two seniors on the St. Anthony’s softball team, looked around the field at Hofstra Tuesday afternoon in disappointment after the Friars’ 4-3 loss to Monroe Catholic in the CHSAA state championship game. But she quickly realized the legacy she left and the promise for the team in the future.

“They’re going to mature and they’re going to win it,” said Daly, of North Babylon, and a three-year varsity player at St. Anthony’s. “It’s maturity . . . and I feel like the next few years, they’ll have it and they’ll make it far.”

St. Anthony’s returns 12 of 14 players next season, graduating Daly, a pitcher and centerfielder, and Nicole Gravagna, the starting first baseman, off a 22-3 team. The Friars reached their second-straight state championship game, as Moore Catholic (28-1), of Staten Island, has ended St. Anthony’s season the past two years.

But Daly played a huge role all season for the Friars, including tossing a five-hitter with no walks and eight strikeouts in a 2-1 victory over Nardin Academy (12-5), of Buffalo, in the semifinals earlier in the day.

“She’s a warrior,” coach Mike Massa said. “She puts in a ton of time and it’s going to leave a big void.”

Erin Steinert, who had four extra-base hits in the two games, including a solo home run in the seventh inning against Moore Catholic, will likely be pitching in Daly’s role next season, Massa said. And the junior hopes to be like Daly in the circle.

“She owns that mound and she acts like she’s the best because she is,” Steinert said. “She just controls everything and her aura is something to look up to.”

Alyssa Seidler had two RBI singles in the championship game, as the team recorded 11 hits in the loss. Taylor Zatyk went 3-for-4 and Daly and Jessica Roberts each went 2-for-4 in the final.

Roberts, who also had an RBI single in the semifinals, made a game-saving play by throwing out the tying runner at the plate from rightfield for the first out against Nardin, as St. Anthony’s held on to win 2-1.

And although Tuesday didn’t end as the Friars hoped, they plan to use the loss as motivation to not only return to the state championships, but win.

“With so many young kids, everybody’s just going to keep getting better and better,” Steinert said. “And we’re going to win it.”

“I expect to compete again, we’re going to be right in it,” Massa said. “We told them, ‘You have to understand how this feels and while we’re all disappointed, we’re proud of you. But just remember this feeling and that should motivate you to get back to this point.’”