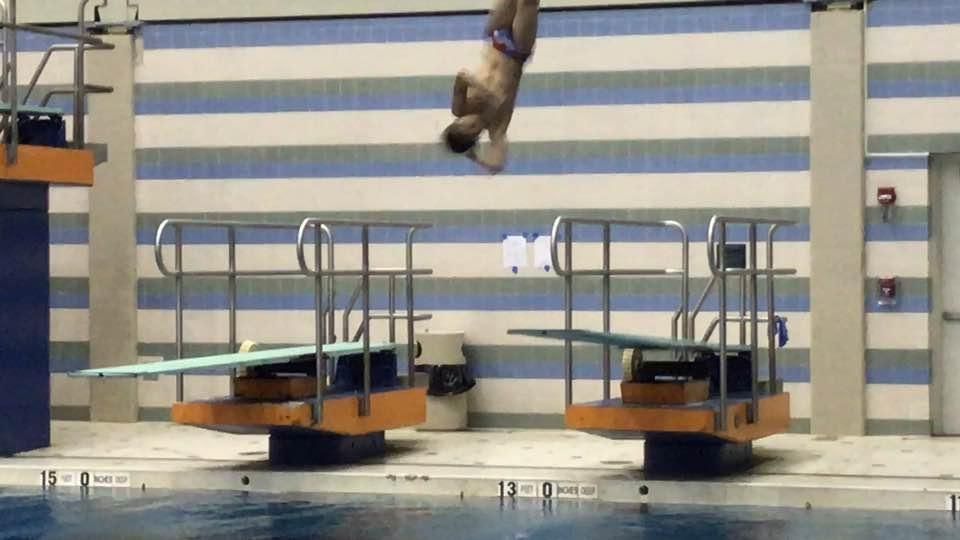 Great Neck South’s Nicholas Shen admitted he was getting nervous.

With Garden City’s Cameron Yuen making a late push and cutting into Shen’s lead at the Nassau diving championships at the Nassau Aquatic Center at Eisenhower Park Wednesday, Shen knew as the final one to take the board that he needed to hit big on his last dive.

“I was pretty nervous at the end,” Shen said. “I thought I was going to mess it up.”

But Shen, a freshman, did the exact opposite. He scored the most points on any dive throughout the competition (56.25) to raise his point total to 494.20 for his 11 dives and exited the pool with his first Nassau diving championship.

Shen needed at least 39.80 points on his final dive to win the title.

“It feels pretty good,” Shen said. “I got pretty nervous as the end because he was getting pretty close.”

Yuen finished second with 477.70 and Plainview-Old Bethpage JFK’s Douglas Vaca placed third with 444.10, including the highest single-dive score (60.20) of the competition, which came on his final dive.

But Shen took control of his nerves.

“That last one, he had to nail,” Great Neck South coach Jim Morrow said. “And he did it.”

Shen, who placed second at last year’s county final, said he felt pretty calm entering the championship, since he qualified for the state finals at Saturday’s divisional championships. He finished 15th at last season’s state final, the best score of any Nassau diver, and this year’s diving state championship will be March 2 at the Nassau Aquatic Center.

“He’s a great kid, works hard, great work ethic,” Morrow said. “ . . . He had a lot of pressure on him this year but he came back with a lot more confidence.”

Yuen finished with a score of at least 44 on seven of his final eight dives, including three dives of at least 50 points. Shen and Yuen were the only two divers with three 50-point dives.

“I was kind of like, ‘I just have to try my best,’ ” said Shen, near speechless as the congratulations came pouring in around him. “If I beat him, I beat him. If I lose, I lose. At least I already made states.”