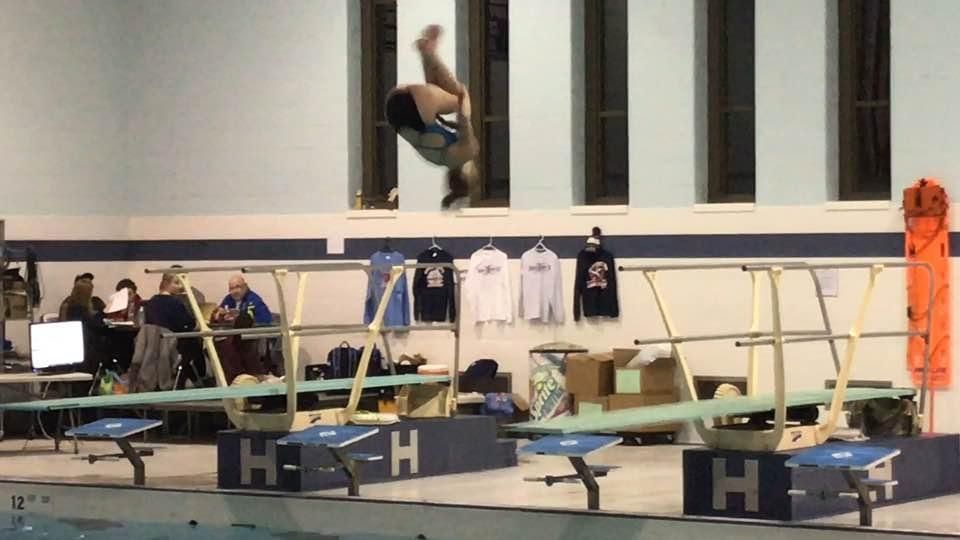 The last time Deer Park’s Daniella Cornelia was diving in the state championships, it was November 2016 and her shoulder was wrapped in tape.

But Cornelia, who suffered a shoulder injury before the 2016 girls diving state championships, wasn’t going to let that keep her out of those finals.

“It’s states,” she said with a big smile Thursday.

But her shoulder required surgery last March, forcing Cornelia to miss this past fall’s girls swimming season. Because the injury prevented her from being able to dive, Section XI boys and girls swimming chairman Gary Beutel granted permission for Cornelia to compete with the boys this winter.

Less than 12 months after her operation, she proved herself more than capable of sharing the board. She will be the lone male or female Suffolk diver at March’s state meet after winning the boys county diving title Thursday at Hauppauge with a score of 416.15.

“Coming into this season, I didn’t think I was going to do as well as I did because I had shoulder surgery last year,” the senior said. “But I’ve been going to [physical therapy] and practice every day and trying to work hard to perform well in this meet.”

Alex Zhang of Huntington-Harborfields finished second with a 411.85 and Hauppauge’s Sean Rorke was third with a 394.65, which coach Rich Lionetti said is a school record.

Although Cornelia said she was upset that she couldn’t compete with her friends in the fall, she didn’t feel intimidated against the boys. “We’re all divers, so it didn’t really make a difference,” she said. “Even though they’re a lot stronger than me, they got a lot more higher than I did, but it’s OK.”

Cornelia trailed the leader by 2.2 points entering the final dive before scoring a 48.30 — her third-best dive of the meet — for the victory.

“It was very nerve-wracking,” she said. “I tried to stay as focused as possible because it was my last dive and I knew I had to rip it.”

It was nerve-wracking for someone else, too. “I probably get more nervous than she does,” said Thomas Cornelia, her father and diving coach. “I’m holding my breath every time she’s taking off the board.”

But after seeing all the work she put in to rehabilitate her injury, her father beamed with pride. “Every day you worry that her shoulder is going to hurt,” he said. “After every dive, I’m like, ‘How’s your shoulder?’ ”

Cornelia is not finished diving, however, and she can’t get the thought of competing at the boys state meet March 2 at the Nassau Aquatic Center off her mind.

Her father corrected her, saying “counties.”

With a smile, she said, “I keep saying states because I’m going to states.”