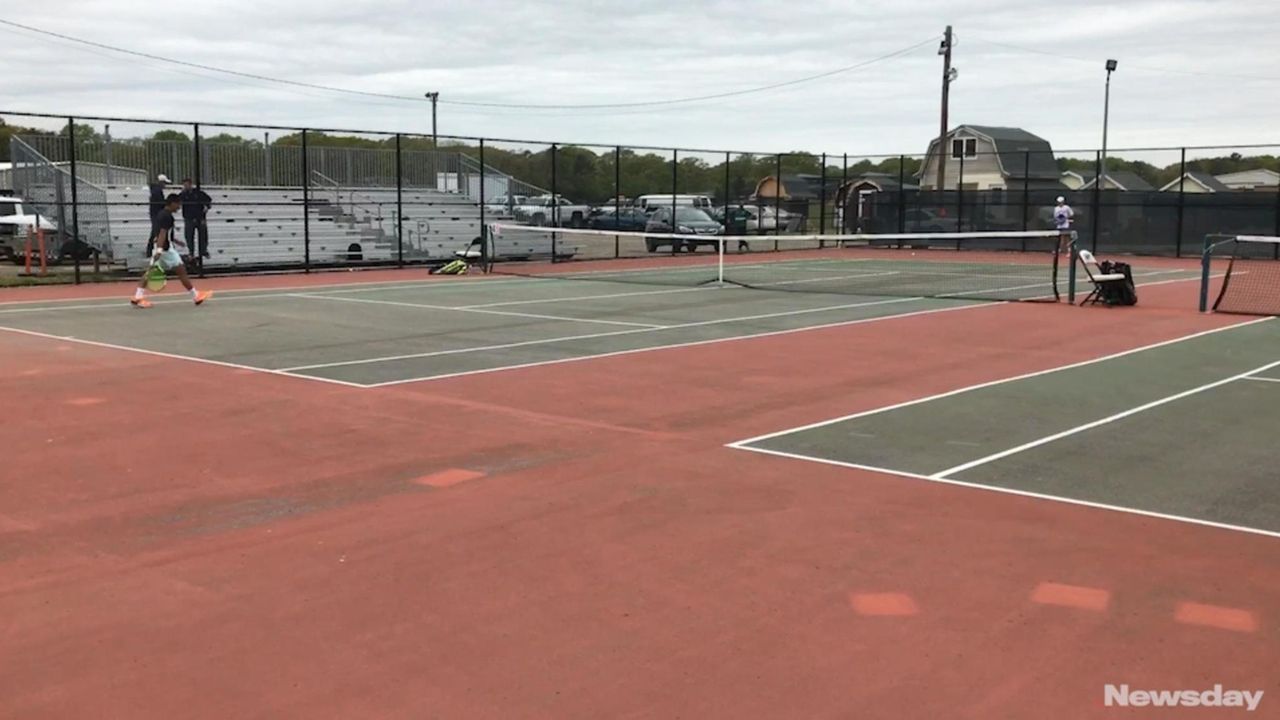 Jack Flores, of Huntington, defeated Abhinav Srivastava, of Half Hollow Hills East, 6-2, 3-6, 6-4, to win the Suffolk individual boys tennis championship at Floyd, on Friday, May 18, 2018. After the match, Flores talked about the win with Newsday. Credit: Newsday / Owen O'Brien

Huntington’s Jack Flores made the most of his 72 hours between the start and finish of the third set of the Suffolk individual boys tennis championship.

After Tuesday’s storm forced top-seeded Flores and No. 2 Abhinav Srivastava, of Half Hollow Hills East, to suspend their championship final in the deciding third set tied at 4 after more than two hours of play, the Huntington sophomore spent his time off getting massages and acupuncture for tendinitis in his right shoulder, Flores said, which forced him to serve underhand throughout the championships.

But with the additional recovery time, Flores came out strong Friday, winning the final two games and the set, 6-4, at Floyd High School to win his second-straight Suffolk individual title.

“I was focused on getting recovery and just resting up my shoulder,” Flores said. “I think [the rain] helped in a way because before, I had to serve underhand the whole tournament and this is the first time in the tournament I got to serve overhand.”

Flores won the championship, 6-2, 3-6, 6-4, to improve to 21-0 after he and Srivastava split the first two sets Tuesday in a rematch of their division championship final, which Flores won.

Huntington coach Jamie Fishlow, in his 19th season, called Flores “probably my best player in my whole career.” And even though Flores was struggling with discomfort, Fishlow said the sophomore’s toughness could have been enough to win Tuesday.

“He has shown a tendency to tough things out, so I’d like to think he would have toughed it out on Tuesday,” Fishlow said. “However, the rest definitely had helped.”

In an all-Commack doubles final, the top-seeded duo of Andrew Lin and Sol Yoon defeated No. 3 Ryan Schoenfeld and Alec Sydney, 6-4, 6-3, for the title.

“Obviously it’s really fun,” Yoon said, “but it also shows how good of a team we have and the depth of our team.”