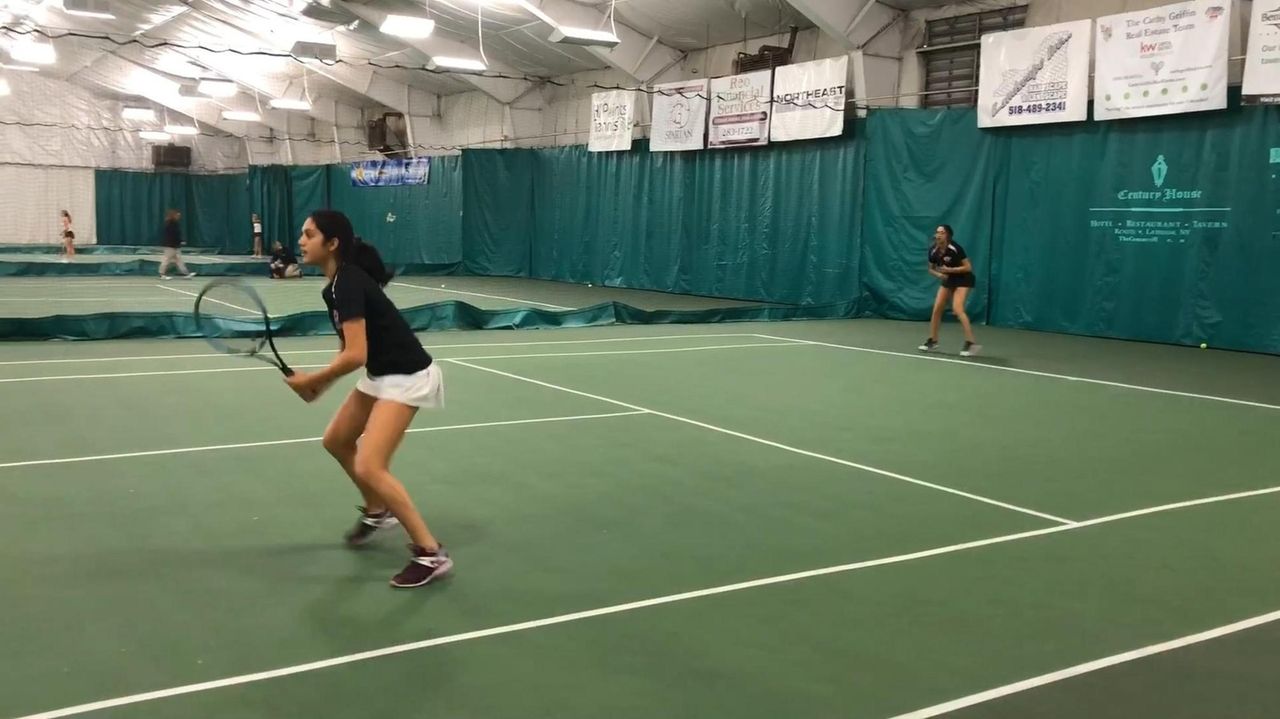 LATHAM, N.Y. — The girls tennis state championship is taking place at the Tri-City Fitness Center this weekend but watching the matches Sunday it could seem like you were back at Eisenhower Park, the Nassau tournament venue.

Port Washington’s Thea Rabman defeated Merri Kelly Hannity of Cold Spring Harbor, 6-3, 6-4 in a semifinal, and Nassau’s top two doubles teams, Rachel Arbitman and Nyla Gershfeld of Hewlett, and Kavina and Kaya Amin of Wheatley, each won their semifinal matches to set up another meeting, this time for a state title.

The singles final is scheduled to begin at 9 a.m. Monday and will be followed by the doubles at 11 a.m.

It was the fourth time that Rabman and Hannity played in the last two months and Hannity had come out on top the previous three.

Rabman played what Port Washington coach Shane Helfner said was the best match he’d ever seen her play and it was enough to break through to the final. She’ll play 2017 state champion Julia Andreach of Our Lady of Mercy (Buffalo) from Section V.

“I felt like there was no pressure on me today because I’m just a freshman,” Rabman said. “I have so many years left to play and it helped me come out and play my best.”

“I don’t think I’ve ever seen her be as accurate as she was in the semifinal,” Helfner said. “She was hitting her spots and playing really clean, smart tennis. She earned it.”

Nassau is looking to win both the singles and doubles state championships for the first time since 2015.

The Amin’s played singles in the postseason last year but decided to team together for their senior season.

“Doubles is more fun and we really wanted to make it to states this year,” Kavina said. “We knew it would be a great experience.”

They defeated Josie Libby and Gwenneth Mattia of Pittsford-Sutherland, 6-0, 7-6 (4) to advance.

“Being sisters is a helpful dynamic,” Kaya said. “With a lot of other partners it’s hard to be honest and really transparent but with each other we know that we have to be able to give each other credit but also help each other when needed.”

Arbitman and Gershfeld, who defeated Alyssa and Ellie Margolin of Byram Hills, 6-1, 4-6, 6-2, said they never had been pushed to a third set as teammates.

“I just knew we had to work together and always fight and never give up,” Gershfeld said.

Arbitman won the singles championship in 2018 and is looking to become the first player to win a singles title and a doubles state championship in consecutive years since Jennifer Kellner of Hauppauge in 2007 and 2008.

“I’m only in eighth grade so this is kind of shocking to me that it’s happening but I’m really happy,” Gershfeld said. “But we’re a really good team and I have a really good partner so I definitely expected to go far.”