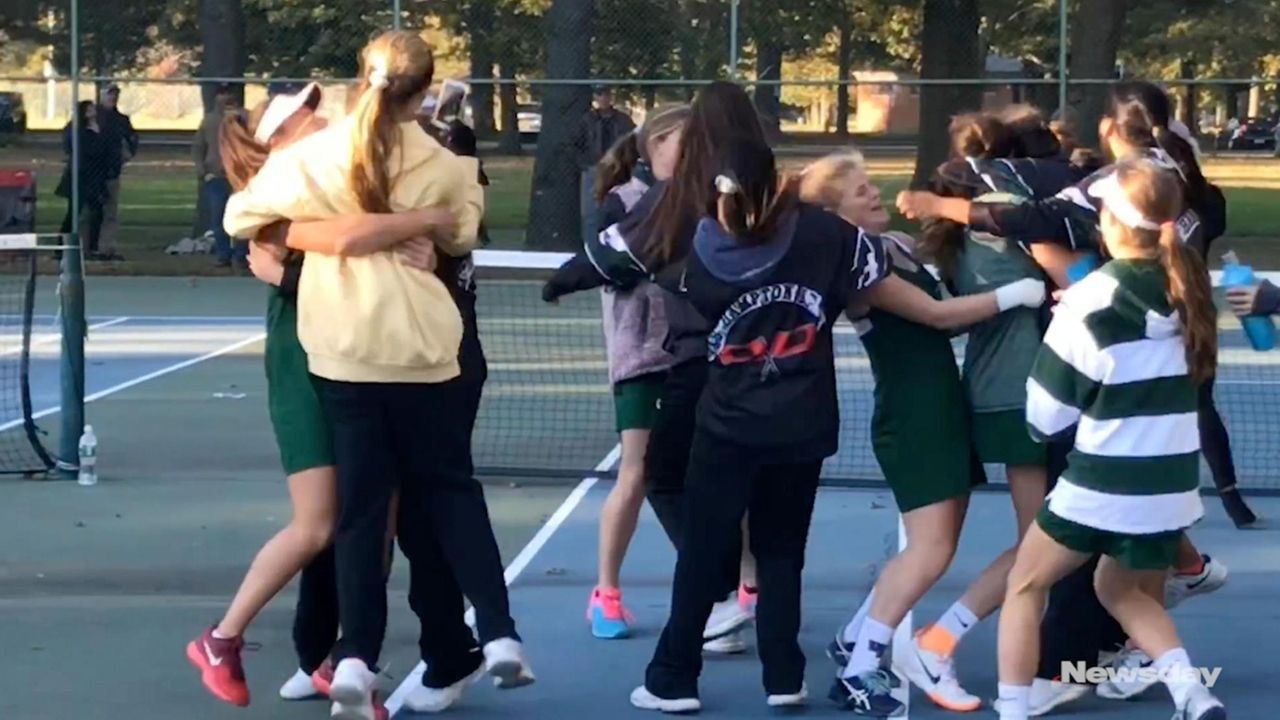 Rose Peruso and Juliet Tomaro didn’t have to think too far back to the last time they were in this situation.

With the team score tied at 3, the second doubles tandem stared down a chance to clinch a second title in two days for the Westhampton girls tennis team.

One day prior, the two closed a county title over Commack with the final point. The two did the same Thursday, delivering a Long Island championship instead, with a 7-5, 7-6 (6) win over Olivia Tiegerman and Alex Flicker, in the clinching match of a 4-3 victory over Syosset at Eisenhower Park.

“I was just in shock for a few minutes because I hadn’t realized what happened until somebody told us,” Peruso, admitting she wasn’t aware their match determined the champion, said. “But when I found out, I was way more excited than I could tell you right now.”

But Tomaro knew even before the ball hit the ground for the closing point what the pair finalized.

“I knew [the score] so it put more pressure on me because this is kind of a bigger title than a county championship,” Tomaro said…“That was the biggest audience of spectators we’ve ever played in front of, which got me a little bit nervous.”

Westhampton (17-0) delivered not only the first Long Island championship in school history, but the first for any Suffolk school, coach John Czartosieski said. And it was a thought the players had on the trip over.

“It’s so funny because on the bus, I was like ‘There’s a Long Island championship banner for volleyball in our gym,’ ” Tomaro said. “And I was like, ‘Wait, there’s no banner for tennis,’ so it just makes it so much better. I don’t even know if there’s room in our gym for another banner.”

Rose Hayes opened the scoring for Westhampton, with a 6-0, 6-1 victory at first singles over Caroline Lee of Syosset (14-4). The Hurricanes also picked up a 6-4, 7-6 (4) victory by Onalee Batcheller and Emma Benden over Stephanie Wiener and Alexa Brecher at first doubles. Brooke Del Prete defeated Alex Ho, 6-4, 7-6 (5), at second singles to tie the score at 3 for Westhampton.

“There was no losing option,” Del Prete said. “You need every point, especially in a tiebreaker at 5. I’m like, ‘I need the next two points or I’m not winning.' ”

And Peruso and Tomaro refused to take the credit for delivering the title.

“It’s a team effort, 100 percent,” Peruso said. “Even though it came down to our match the past two, it wasn’t just us. It was the entire team.”

“It’s just incredible,” Czartosieski said. “They were both solid in the end. I think Rose elevated her game a little bit while the other girls were playing it safe and then Juliet hanging tough getting her shots in, it all came together.”