Geffrey Alpers certainly made up for lost time on Saturday afternoon.

The Newfield junior, who competes for Middle Country, came away a double winner in the boys team’s first track and field meet of the winter season, a dual meet hosted by Central Islip. The event also was the first high school competition for both sides following the cancellation of the spring 2020 season and postponement of the fall campaign due to the COVID-19 pandemic.

"It’s really good to know that I didn’t waste or lose too much during the break," Alpers said of his victories in the 55-meter hurdles and 600 run. "Putting in the work by yourself can bring about a result." 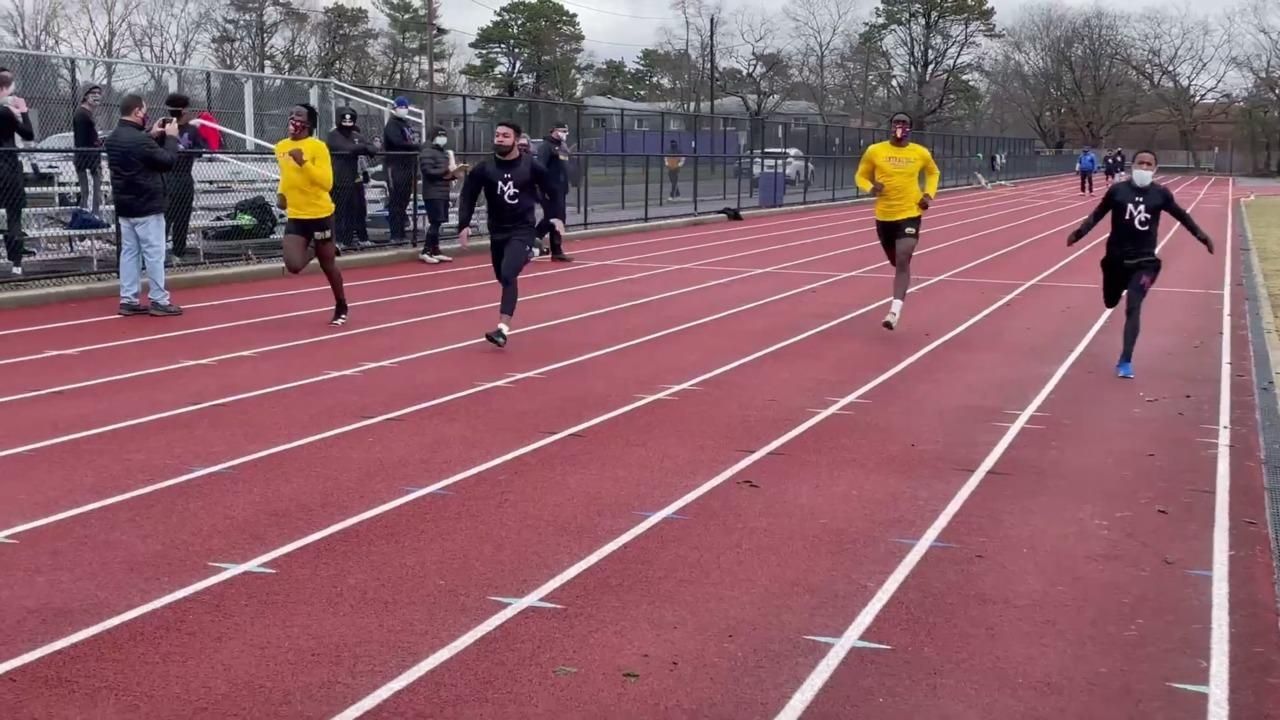 With meets this winter season being moved outdoors from the traditional indoor setup, and masks also being required at all times, Alpers noted how different competing under a new set of circumstances felt.

"With the cold it’s a little harder to get loose," Alpers said. "And it’s just nice to get back to competing."

After winning in 9.7 seconds in a close 55 hurdles event, Alpers followed with an impressive 1:31.9 victory in the 600, breaking away from the pack for the majority of the race.

"I just tried to get out early, not slow down and maintain the lead," Alpers said. "It was really about just focusing on progressing. We’re starting at a disadvantage this year and it’s really good to push through so that we can improve by the end of the season."

His teammate, Dean Mauri, also a junior from Newfield, finished as a double winner as well. He captured the day’s first track victory in the mile run (5:07.74) before rallying from behind to take the 2-mile run (11:30.4).

Mauri said wearing a mask was challenging while running the first 300 meters of his 1-mile run, but he eventually became accustomed to it and surged ahead. After making a late push during the final stretch of the 2-mile, he earned an exhilarating win by nine-hundredths of a second.

"I saw someone ahead of me and I just knew I had to beat him," Mauri said. "So I just gave it all I could and I got him. The cold is definitely an adjustment but it’s something we’ll have to work on through all season."

In the field, Central Islip sophomore Ryan Antwi had a quality performance of his own in winning both the long jump (19 feet, 8 inches) and triple jump (42-5). Other boys winners included Middle Country's Christian Charles in the 55-meter dash (7.1 seconds), Middle Country’s Nicolas Lavizoli in the 300 (36.7), and Middle Country’s Carter Rothwell in the 1,000 (3:06.2).