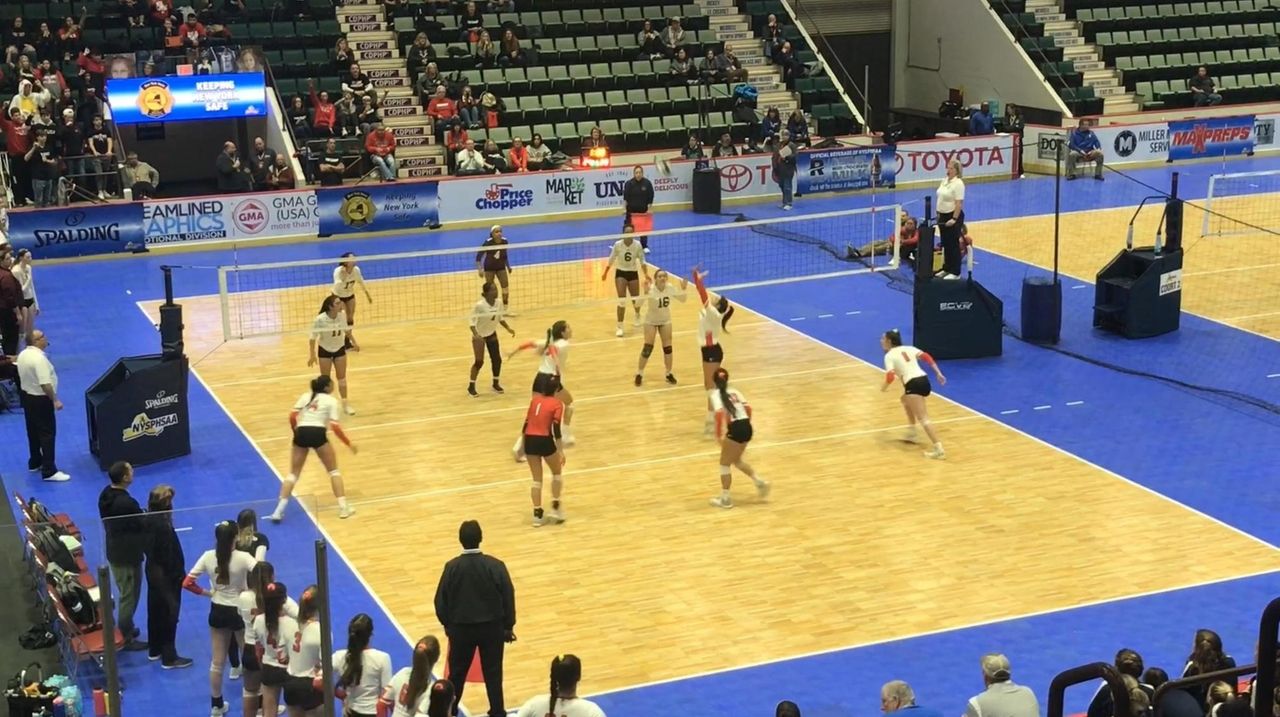 GLENS FALLS – The Connetquot girls volleyball team had to stock up on markers this season.

Before every game, each of Thunderbirds used a marker to write two sayings on their legs: "We Get To" and "Unleash." The idea, senior outside hitter Kiarra Roth said, was to inspire Connetquot to seize its on-court opportunities and unleash its talent on opposing teams.

The Thunderbirds did both on Saturday, going 5-1 in pool play of the state tournament at Cool Insuring Arena and advancing to the Class AA championship. Connetquot will take on Baldwinsville at 2 p.m. Sunday, looking for its third title in five years.

“We don’t take it for granted that we’re here,” said Roth, who finished with 20 kills in six sets. “We get to be here, we get to wake up every day, we get to battle, and we get to go play in a state championship.”

The Thunderbirds opened the day by defeating Our Lady of Mercy, 25-21, 25-20, highlighted by an eight-point run to capture the first set. Coach Justin Hertz credited Connetquot (20-1) for its play late, adding “that was almost an insurmountable hole to be in.”

“You’re proud that your kids are resilient, and they dug out of it,” Hertz said.

It wasn’t the only rally Connetquot staged.

After defeating Ossining, 25-22, the Thunderbirds found themselves trailing, 12-7, midway through the second. The squad didn’t panic, answering with a 9-2 run to take a 16-14 lead and grab some much-needed momentum.

“We were behind a few times throughout the afternoon and they played with such good composure and without getting rattled,” Hertz said. “I think we did a really nice job of grinding it out.”

Ossining got as close as 20-18 in the second set, but Connetquot answered every push with one of its own, led by powerful hitting and confidence at the net. The Thunderbirds won the set, 25-20.

“I think we’re one of the strongest teams in the state, not just because we’re here, but we have some of the strongest hitters and defenders,” said junior outside hitter Gabriella Carere, who had 20 kills. “We’re really a well-rounded team.”

Now, the Thunderbirds turn their attention to one more match, one more opponent and one more opportunity to live up to the mantras they’ve built their season on.

“It’s all about working together,” Roth said. “When we’re united, we’re pretty much unstoppable.”