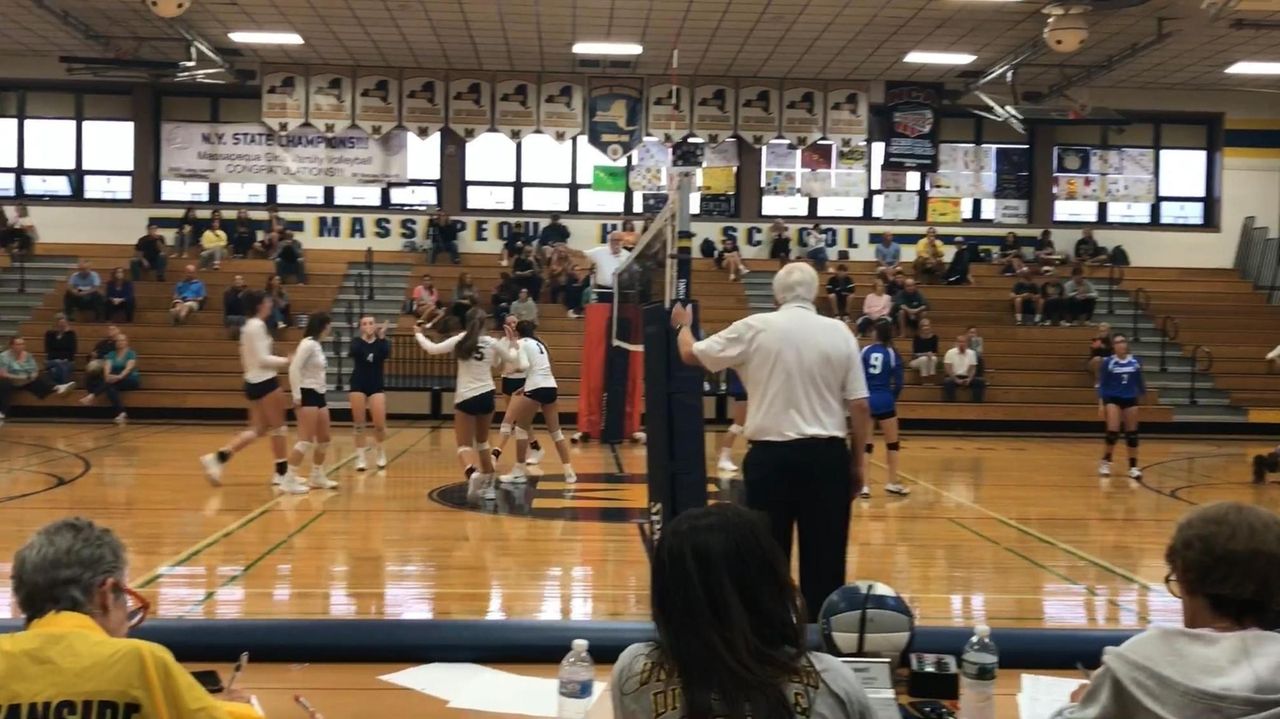 Gabriella Heimbauer had 10 kills in Massapequa’s 3-0 girls volleyball win over Oceanside in Thursday and spoke about how her sister, Alessandra, helped in her recovery from an ACL injury. Credit: Newsday / Kenny DeJohn

Gabriella Heimbauer leaps, swings and lands gracefully. With what the 6-3 senior had to go through to get back to this point, that much is impressive.

Considering how long it took her to get back on the court, the outside hitter for Massapequa is just happy to be back doing what she loves. Crushing volleyballs.

She led a balanced Massapequa attack with 10 kills in the Chiefs’ 25-12, 25-8, 25-11 home win over Oceanside in Nassau AA/B/C-I on Thursday night, pounding set after set into the hardwood.

“Best feeling in the world,” said Heimbauer, who didn’t play volleyball as a junior because of an ACL injury she sustained as a sophomore during the Nassau Class AA girls volleyball championship game. “It’s really nice to come back from something this hard. It’s just incredible.”

The issue, she said, came in strengthening her quad.

“It took a long time for my quad to get built back up, so I had to kinda just buckle down for over a year just trying to strengthen up this every single day,” she said.

Heimbauer managed to play a bit of basketball last year, but now she’s back healthy for volleyball — and Massapequa’s better for it. The Chiefs improved to 4-0 thanks to Heimbauer and her sophomore sister Alessandra, who had six digs, five kills and three aces. Alexis Panagoulias added four kills, and Meghan Kirtyan had 17 assists.

While the balanced Chiefs played nearly error-free, it was the Heimbauer sisters who stole the show. When one swings, the other cheers. When one makes a mistake — a rarity — the other is there for encouragement.

That was how they acted during Gabriella’s recovery, too.

“My whole family helped her throughout the whole thing with everything,” Alessandra said before Gabriella quickly chimed in.

“She helped me the most with everything around the house,” she said.

Even when her older sister needed help with the most remedial task, Alessandra did it willingly, Gabriella said. Now that her sister is healthy, Alessandra said Massapequa has found a spark.

“At first, it was very difficult to see because I know she’s such an amazing player,” she said. “But then to see her back on the court just brought back that energy that we all needed.”

The energy was evident early, as Gabriella’s first kill split the back row of Oceanside (0-3) for an easy point. Even during a rigorous recovery, she didn't lose any of that signature power.

A power that could lead Massapequa to a county championship.