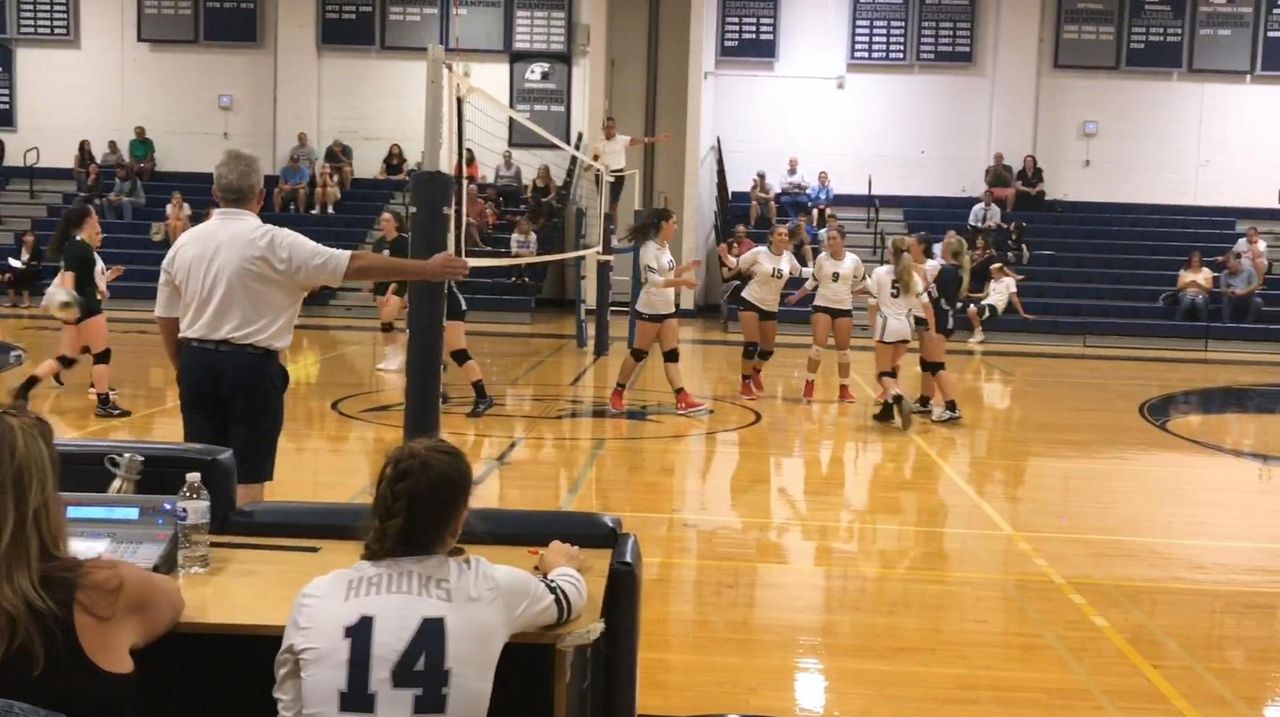 Jessica Layton had seven kills and spoke about how Plainview-Old Bethpage JFK overcame a season opening loss to Seaford after defeating Seaford 3-0 in a Nassau AA/B/C - I girls volleyball match on Tuesday. Credit: Newsday / Kenny DeJohn

The Hawks dropped the season opener to the Vikings, but it didn’t take them long to get even. Just eight days after a five-set loss to Seaford, Plainview-Old Bethpage JFK dominated in 25-22, 25-18, 25-22 win at home. It was a stark difference from the season’s first match in which errors were its downfall.

“I think our first time, our communication wasn’t there, and we weren’t really working as a team,” said senior setter Julia Masler, who had 25 assists Tuesday night. “Then, by the end, even though we did lose, you could see a little more team communication and bonding.”

The Hawks (3-1) then swept Farmingdale and defeated Oceanside, 3-1, getting on a roll heading into the match. With new starters and an infusion of youth — namely sophomore Jessica Layton, who had seven kills — the Hawks needed court time together.

“I think we all started to realize our roles and where we all fit in with each other, and by this game, we were all ready to work together,” Layton said.

Seaford (1-3) carried over its confidence from that win in the opening set, jumping to an 8-1 lead with Anna Butler on the service line. The Hawks chipped away and took the lead for good at 21-20. Emily Howell (five kills) and Layton recorded kills to close the set.

After a back-and-forth beginning to the second set, Plainview-Old Bethpage JFK didn’t take control until Masler stepped to the service line midway through. She served seven straight points — highlighted by kills from Daniela Iloulian (five kills), Nikki Mastorides (six) and Layton — for a 19-10 lead.

Seaford cut it to 19-15 behind a trio of kills from Emily DeVito, but the Hawks leaned on libero Brianna Paoli to help score six of the last nine points.

It was Masler’s assist to Mastorides late in the final set that gave the Hawks a 23-22 lead, and Masler finished it two points later with a dump off a defender.

With so many hitters around her, Masler distributed the ball evenly to Layton, Iloulian, Mastorides, Howell and Gianna Laucella (four kills).

“I think that we have a strong hitter at each of our positions, so they don’t really know who I’m going to throw it to,” Masler said, “and I think that throws off their defense.”

Now in sync, the Hawks offense could be a major problem for the rest of the conference.