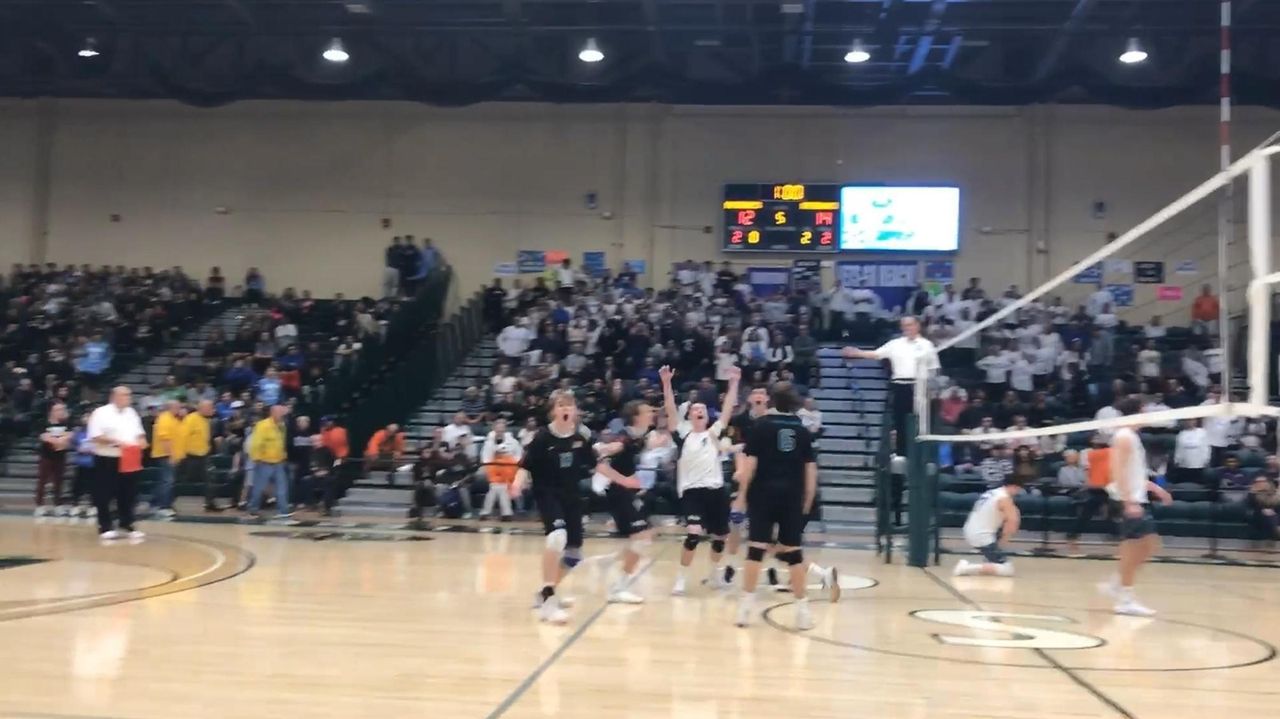 With the first opportunity to compete for a state title within reach, Ryan Barnett and the Westhampton boys volleyball team seized the previously-elusive victory on Tuesday night.

As Barnett’s final kill fell to the hardwood in the tiebreaking fifth set, the Hurricanes captured their first Long Island championship in program history.

“This means everything,” said the senior outside hitter, who had 18 kills as Westhampton defeated Long Beach, 25-21, 25-27, 25-20, 17-25, 15-12, to win the Long Island Class B boys volleyball championship at Farmingdale State. “It’s awesome. Since seventh grade we started a goal for the program, so it’s amazing to be here.”

Westhampton (12-6) now heads upstate, advancing to the state semifinals on Saturday at the Albany Capital Center.

“The fifth set was all momentum,” Barnett said. “Everything about that set is so different from any other. When you change sides after eight points, it’s a whole different perspective. So we always have to stay positive.”

Clinging to a 13-12 lead in the final game, Westhampton picked up the final two points to seal the historic victory.

“It was all momentum,” said sophomore Daniel Haber, who added 15 kills. “That was the momentum set. Whoever had it the most was gonna win that game. And we just stayed positive and finished.”

“What we’ve done for this program is amazing,” senior Luke Farnan said. “I can’t thank our coaches and alumni enough. They’ve taught us everything we know."

After Westhampton broke a tie at 1 in the third set with a 25-20 win, Long Beach utilized a 10-1 stretch in the fourth game to go ahead 19-9. The Marines finished off the set with a 25-17 win to force a winner-take-all scenario.

“We just had to remember our training,” Haber said. “We prepared for this team for a week and we had to get back to the roots. Once we did, we got going and we won.”

Westhampton coach Jackie Reed said the Hurricanes were well prepared for the final set thanks to a situational drill they’ve run throughout the season.

“One that we’ve run a lot is where we’re down 3-8,” Reed said. “How are you going to come back? We usually falter but this time we were up 8-5. So we knew if we kept pushing like we were down, it would work out in our favor.”

Trailing 25-24 in the second set, Brian Corrigan capped off a run of three consecutive points that gave Long Beach (17-5) a 27-25 win that tied the score at one set apiece. The Marines led 23-21 prior to Westhampton forcing the back-and-forth action.

After scoring four of five points, Westhampton created some breathing room in the opening set with a 20-15 lead, before Long Beach later picked up three unanswered points to cut deficit to 23-20. Barnett proceeded to close out the game with a kill on the right side, giving the Hurricanes a 1-0 advantage.

Reed expressed confidence in her squad’s capabilities as they prepare to make the trip upstate and look to write some more history.

“I could potentially see us coming out as state champs,” Reed said. “Which is 100 percent unbelievable, coming out of little Westhampton.”