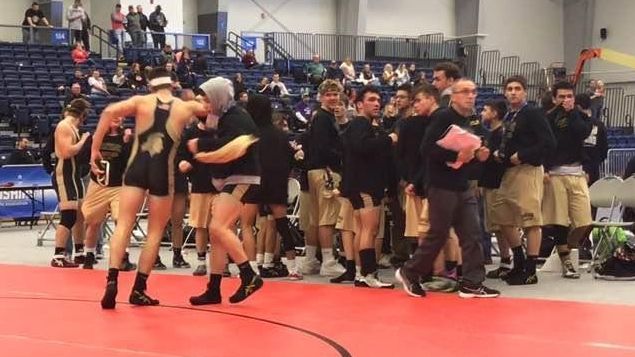 SYRACUSE, N.Y. — In the biggest matches at the most important dual meet of the season, Wantagh didn’t hesitate to get creative with its lineup and weight classes.

Wantagh trailed Minisink Valley by seven points at the inaugural state Division I dual meet wrestling championships Saturday, but the Warriors had a plan. They went small — in a way — knowing that the talent of their wrestlers could overcome a weight disadvantage. James Langan, who spent the afternoon wrestling at 182 pounds, competed at 195 pounds, and Jonathan Loew, in the 195-weight class, bumped up to 220 in the finals.

“I was thinking in the back of my head I knew I needed a pin,” Langan said. “But at the same time, I was just going out to wrestle my match and just get the win for my team.”

Langan did just that — pinning his opponent in 44 seconds — and Loew won via fall in 21 seconds to catapult Wantagh to a 37-28 victory at the SRC Arena at Onondaga Community College. The Warriors are the first group of wrestlers to call themselves official state dual meet champions.

“We came into this the one seed,” said Justin Vines, the defending state 126-pound champion who won all three of his matches at 138 pounds and his final one at 132 pounds. “We wanted to prove that we are the one seed and we are the best team in the state and we are the hardest hitting team out there.”

The magnitude of the moment wasn’t lost on the Warriors, as they will forever be remembered as the first dual meet state champions.

“It’s the coolest thing I’ve seen in my wrestling career,” Vines said. “One hundred percent. And to make history today is a dream.”

Rocky Point loses in semis. After winning its first two matches, Rocky Point, which was unseeded entering the championships, fell to No. 2 Minisink Valley, 47-26, in a semifinal.

“That was fantastic,” said Anthony Sciotto, who won via pin and technical fall at 126 and won via decision at 120 pounds in his matches. “Coming in here unseeded, no one really thought we had the will to come out here and win. A lot of people didn’t even think we were going to win a match and we’re in the semifinals.”

Rocky Point (19-2) defeated defeated Spencerport, 39-29, in its first matchup before defeating Jamesville DeWitt, 51-21, to advance to the semifinals.