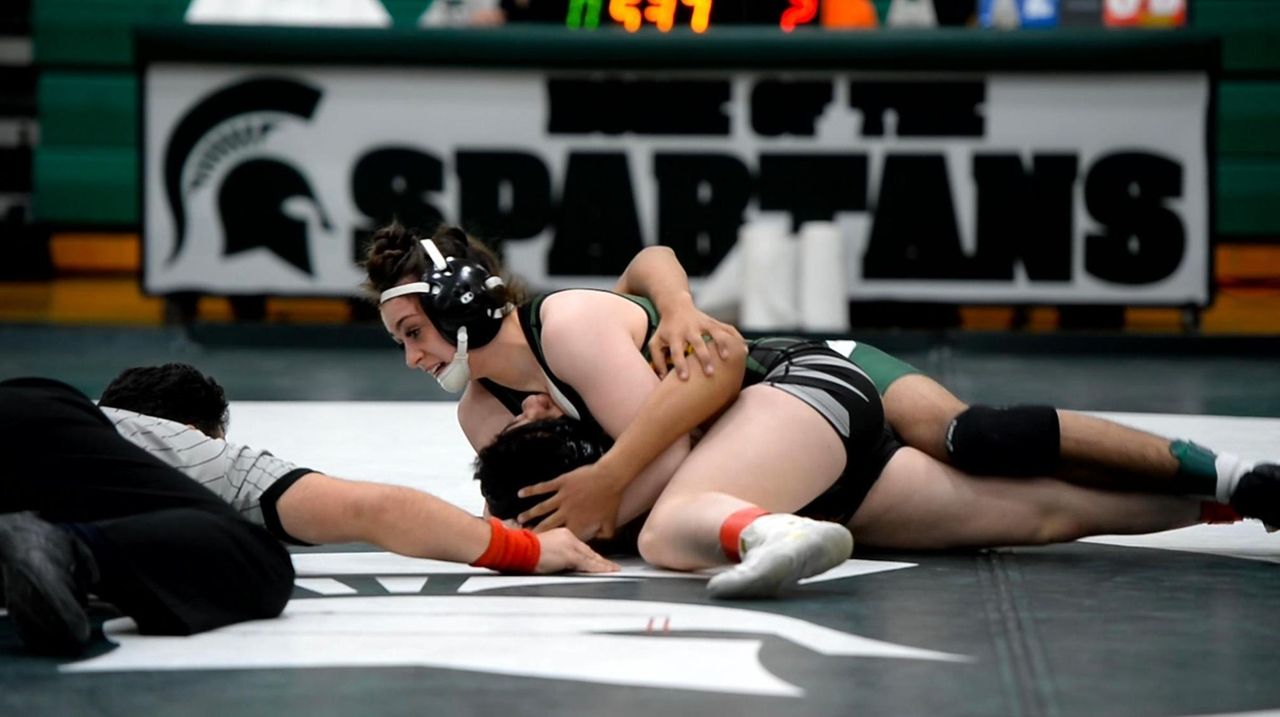 Lynbrook junior Ally Fitzgerald, who made headlines by winning a boys high school tournament as a freshman in 2018, talks about her experience in the sport of wrestling. She won the Eastern States tournament earlier in 2020 and is the first girl to ever qualify for the Nassau County boys sectional championship tournament. Credit: Howard Simmons

Ally Fitzgerald became the first girl on Long Island to qualify for a boys sectional wrestling tournament. The Lynbrook junior put together a 4-1 record at the Long Beach qualifier Saturday to secure a spot in the 120-pound weight class in next week’s Nassau championships.

“She wrestled her best tournament of the past three years,” Lynbrook coach Rich Renz said. “I knew she could do it. She was focused and wrestled smart. She’s worked hard for the opportunity to wrestle in the county tournament.”

After winning her first two bouts by pin, Fitzgerald was pinned in the first period of the semifinals by second-seeded Andres Castro of Long Beach. The loss forced her into the consolation bracket, and she needed one win to qualify for the county tournament.

“She was under so much pressure because there was so much at stake,” Renz said. “It’s been her goal all season to qualify for the county tournament. She really believed she could make it.”

Fitzgerald decisioned David Portillo of Glen Cove, 7-3, to guarantee her spot in the county tournament and her place in history.  The win was met with exultation from the Lynbrook bench, knowing what the outcome represented.

“I knew I qualified after the first consolation win, but I wanted to stay focused and come back for third place on the podium,” Fitzgerald said. “I wasn’t satisfied with just qualifying. I wanted third place.”

Fitzgerald (24-7) rallied to win the third-place bout after falling behind Roslyn’s Athanasi Vlahopoulos and facing a seven-point deficit.

“He took that big lead and at one point had me on my back in the second period,” she said. “I battled off my back and got back into the bout in the third period.”

Trailing 11-10 with 18 seconds left, Fitzgerald stepped over Vlahopoulos for the two-point reversal and the 12-11 victory.

“I needed an escape for the tie to force overtime,” she said. “The reversal for the win was a better plan.”

“It was an unbelievable match,” Renz said. “She finished strong.”

Podcast: Growth of girls wrestling, County tournament previewBay Shore's Bob Panariello joins Newsday's Gregg Sarra and Andy Slawson to discuss the growth of girls wrestling on LI, plus a look ahead to the boys county tournaments this weekend. Ally Fitzgerald continues to amaze in male-dominated wrestlingShe dominated the 113 final in the girls-only portion of the prestigious Eastern States Classic.