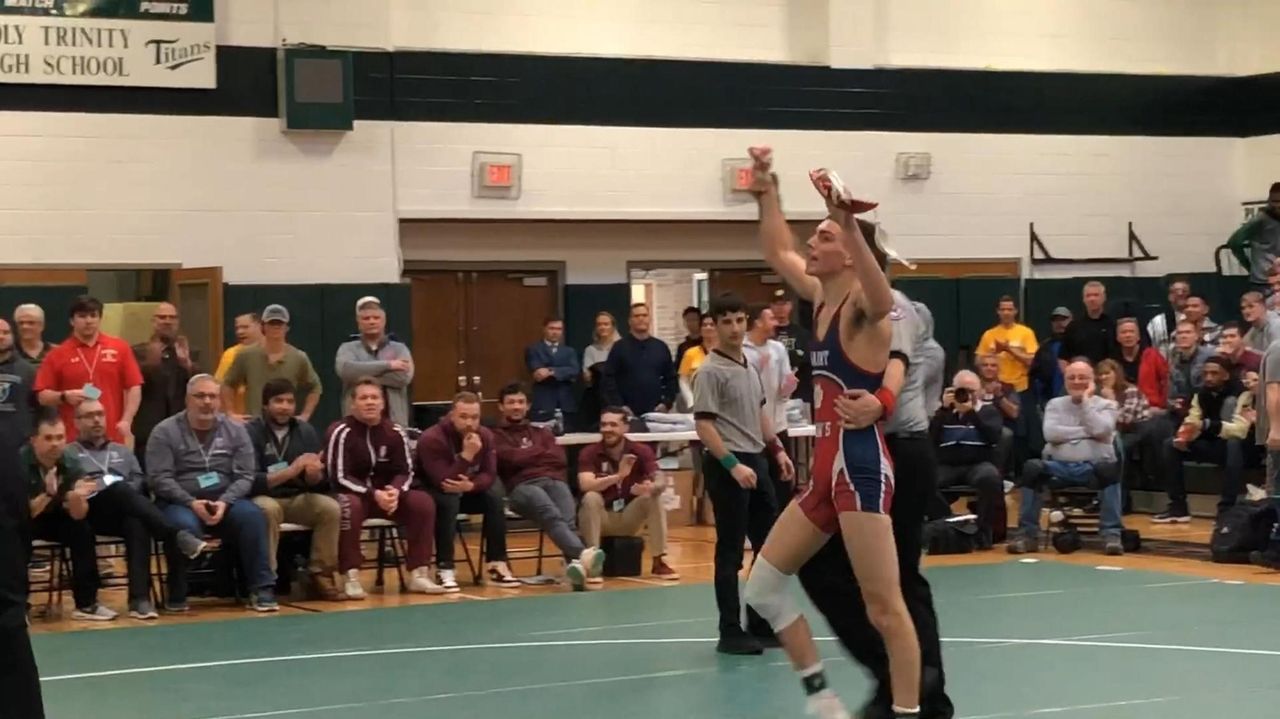 The bumps and bruises and fresh disappointments over four years all came to a head in a sea of happiness.

The Cougars' No. 1 138 pounder had just won an epic 8-7 decision over Chaminade’s Christian Schifano that included crowd chants, taunts and comebacks.

It was a celebration worth waiting for as Crisci had never won the CHSAA Championship.

“I wanted to go out as a champion,” Crisci said. “. . . Last week [when he lost a 10-2 decision to Chaminade’s Michael Semeraro] was heartbreaking and I didn’t want to let that happen again.”

The celebration was not scripted but it had meaning as Crisci was completing a promise to the man who challenged him and pushed him to be a champion.

“I told [Bartoli] earlier in the week, ‘if I win the state [CHSAA] championships I’m jumping,’” Crisci explained. “He said he would catch me.”

But Crisci was not the only wrestler to bring the crowd to its feet.

No. 1 182 pounder James Watterson of Kellenberg was one of 14 qualifiers for the CHSAA championship at Holy Trinity Sunday, but as the only representative for his school in the final, Watterson, a senior, had his last chance to achieve a dream.

As shouts of “Watty, Watty echoed throughout the crowded gym, Watterson took an 11-3 major decision overt Ronnie Jones from St. Joseph’s Collegiate Institute.

“It took my entire heart,” Watterson said “ . . . [Jones] was a good wrestler but I think I just overpowered him in the end."

Some time ago Kellenberg coach Eric Meisse might have envisioned an entirely different scenario. “I’m so happy for James,” Meisse said “He walked into our wrestling room four years ago with no experience. If you would have told me he would have been the Catholic State champ . . .,” Meisse chuckled. “ . . . He took advantage of all of his opportunities.”

As did Holy Trinity senior and No. 1 220 pounder Brian Holder, who won his bout over Xavier Prep’s Brandon Cohen, 4-3.

Holder, like those before him, credited the crowd, including those closest to him for helping during a tiring match. “I heard them the whole time [and] there were some big moments where it really got loud,” Holder said, “My Dad’s been coaching me since I was seven years old, he’s been at every one of my match’s for however long, he’s always been there coaching me and pushing me forward.”

As Holder, Watterson and Crisci and four other Long Islanders head to Albany they remind us that skill is only part of the equation.

“Once it gets down to the minute, its all about what you have here,” Crisci said as he pointed to his heart.