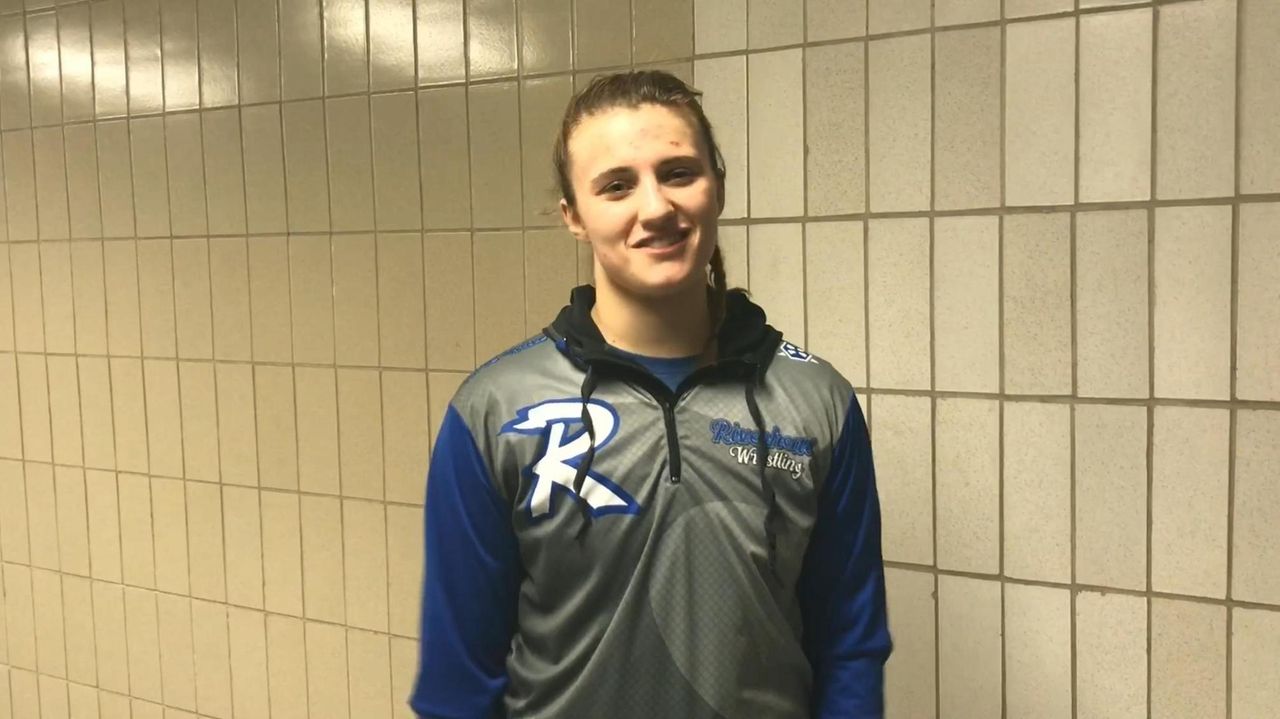 There was nothing more for Katie Moore to do.

Coming into Saturday’s state girls wrestling invitational at Truman High School in the Bronx, the Riverhead senior said she had a simple mindset: “To dominate and win.”

So, that’s what Moore did, placing first at 172 pounds and winning all three of her round-robin bouts, including a pair of pins.

“This is the third year that I’ve come to this tournament,” said Moore, who joined the Riverhead varsity team as a freshman. “I’ve been in the finals all three years and won it the past two years, so I was aiming to win this too.”

Although it’s not a championship sanctioned by the New York State Public High School Athletic Association, the tournament, brought together 42 schools and wrestlers from across the state, with athletes from as far as Albany taking the mat. For some, it was one of the few chances to wrestle in an all-girls event.

“It’s such a better environment to be in and a positive environment too,” said Sachem East freshman Sara Christie. “Girls are complimenting each other after the matches.”

Copiague sophomore Paris De Freitas echoed the sentiment: “I like competing and seeing so many girls interested. For me, someone who started [wrestling this season], it makes me happy that everyone is doing so well.”

Moore did better than well.

While training in Minnesota, Moore tried to lift a trailer when it fell on her hand, requiring two surgeries. She wrestled with the injury during a national tournament in Fargo, N.D., but broke five more bones during the event.

Through it all, Moore, who will wrestle for the Life University (Ga.) women’s team next year, was as determined as ever to keep winning.

“In wrestling, you adapt to every situation in a moment,” she added. “As soon as I broke it, I wanted to continue.”

Riverhead coach Jake Benedetto credited Moore for her focus, saying, “she wasn’t short-sighted with her injury, she knew she had to get better for our boys season and then this.”

Islip eighth-grader Mora Peterson, who wrestles for Bay Shore, placed third at 100 pounds, defeating East Islip’s Emily Conlon 6-4 after falling to her in their opening-round match.

“[I] had to forget about it,” Peterson said. “I went in thinking I wanted to be on the podium. That was my whole mentality.”

Sachem East sophomore Adrianna Eberhardt also placed third at 148 pounds with a 9-3 decision over Seward Park’s Angel Zhang. She said competing against other girls was something she relished.

“With girls, it’s all equal,” Eberhardt said. “We get as many matches as we can, we’re all wrestling as hard as we can and it’s a lot different than wrestling with guys.”

The Marauders, who were recognized by NYSPHSAA as the first school to have a wrestling team for girls only in the state, finished fourth in team scores, with 61 points. Truman was first with 102, with Seward Park (73) and Townsend Harris (66) rounding out the top three.

Bay Shore coach Amber Atkins said she hopes the tournament will help continue to grow girls wrestling, adding that when she was in high school she “only got to wrestle girls once a year and it was…in Michigan.”

“Just the fact that New York has its own tournament is an amazing thing,” Atkins said. “Do I hope that we’ll get to the point where we’ll have our own NYSPHSAA state tournament? Absolutely, but this is definitely a good, solid start for it.”