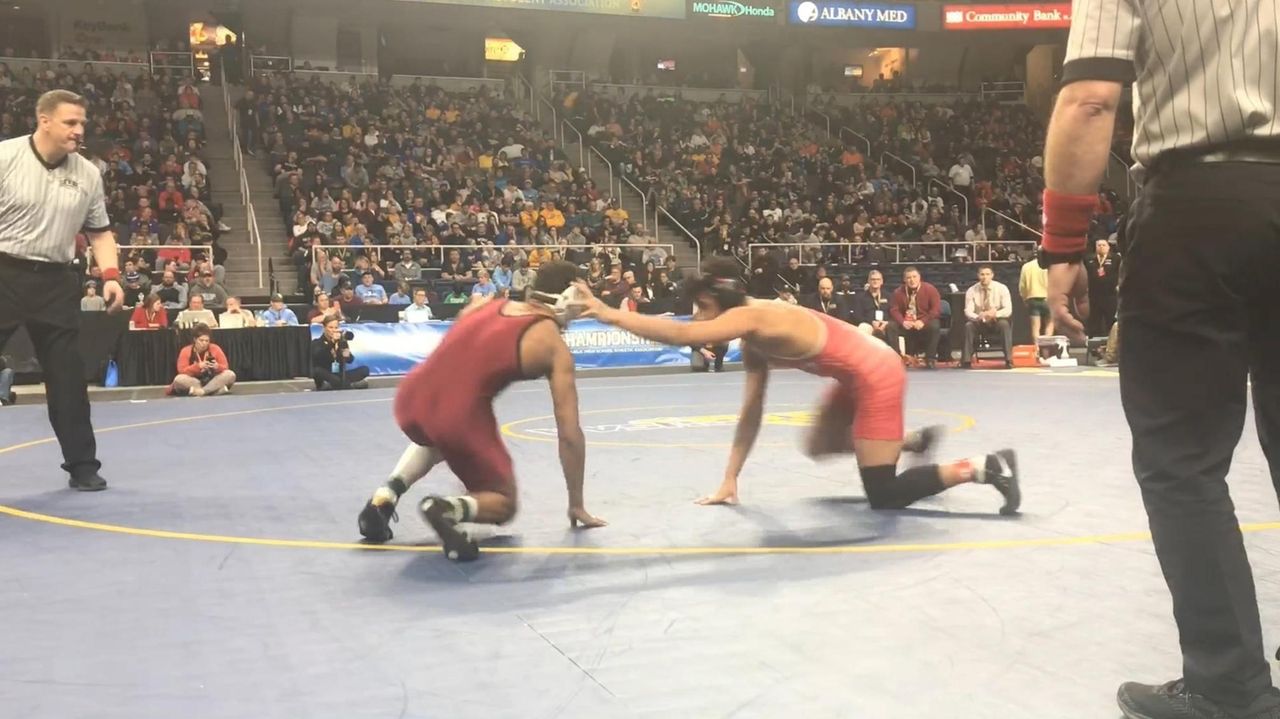 ALBANY — Jordan Titus walked back to the center of the mat after the final whistle of his Division II 126-pound championship at the Times Union Center on Saturday night and waited for the referee to raise his hand.

And then he held up his other hand, flashing two fingers in celebration.

The Center Moriches junior, who came into the state wrestling tournament as the top seed in his weight class, captured his second straight state championship, defeating Lowville’s Micah Roes, 9-2. It was Titus’ fourth consecutive appearance in the finals.

“I planned that,” said Titus of his post-match move. “I came in here thinking I should win if I wrestled solid, and that’s what I did.”

Titus grabbed an early lead, scoring a takedown just over a minute into the first period, and said the points helped him set the tone of the match. He continued to push tempo in the second, taking a 6-0 lead and focusing on his offense to keep Roes on his heels.

“I knew I just had to come out and get the first two,” Titus said. “Then he’d have to wrestle to come back. That’s when they start to make mistakes. The first takedown I got was my shot.”

Center Moriches coach Mike Koscinski credited Titus for his approach, saying “He can score from any position and once he’s comfortable, it’s pretty much Jordan takes over.”

Titus allowed five points in his four matches at the state tournament and booked his championship berth with a 17-0 tech fall victory over Walton/Delaware Academy’s Cody Merwin.

The state crown capped a championship-filled season as the Red Devils’ star also clinched first-place finishes at the Ironman wrestling tournament in Ohio, becoming the first New York wrestler to win at the event, and Eastern States Classic

“He’s really worked on his craft and become dominant,” Koscinski said. “I believe he’s probably the most dominant kid in New York state.”

While Titus has turned championships into a habit, Mt. Sinai senior Matt Campo clinched his first title in his first appearance, defeating top-seeded Mikey Squires of Norwich, 4-2, in OT at 170 pounds.

“It’s all heart and I just put all the time in and I was not about to lose that match,” Campo said. “It’s completely surreal.”

Campo said he was familiar with Squires, having wrestled him “probably seven or eight times.” He didn’t always come up on the winning side of those matches and the hope for some revenge helped spur Campo late.

“Me, my dad, my coaches, we just went over and over how to beat him,” Campo said. “He’s just like me, great wrestler, great competitor. That match could have gone either way, but I wound up on top today.”