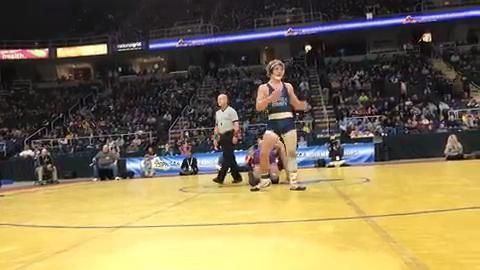 Liam McIntyre of Westhampton Beach fell to Sam Deprez of Hilton, 4-2, in the Division I 195-pound final at the 2019 NYSPHSAA State Championships at the Times-Union Center in Albany on Saturday, Feb. 23, 2019. Credit: Newsday / Melissa Kramer

ALBANY — Sixth-seeded Liam McIntyre of Westhampton fell to top-seeded Sam Deprez of Hilton, 4-2, in the state Division I wrestling final at 195 pounds on Saturday night at the Times Union Center.

McIntyre earned a 4-3 decision over second-seeded Jhordyn Innocent of East Ramapo to advance to the final.

Down 4-0 in the final after being taken down twice in the first period, McIntyre recorded a takedown of his own in the third period. But the comeback fell just short.