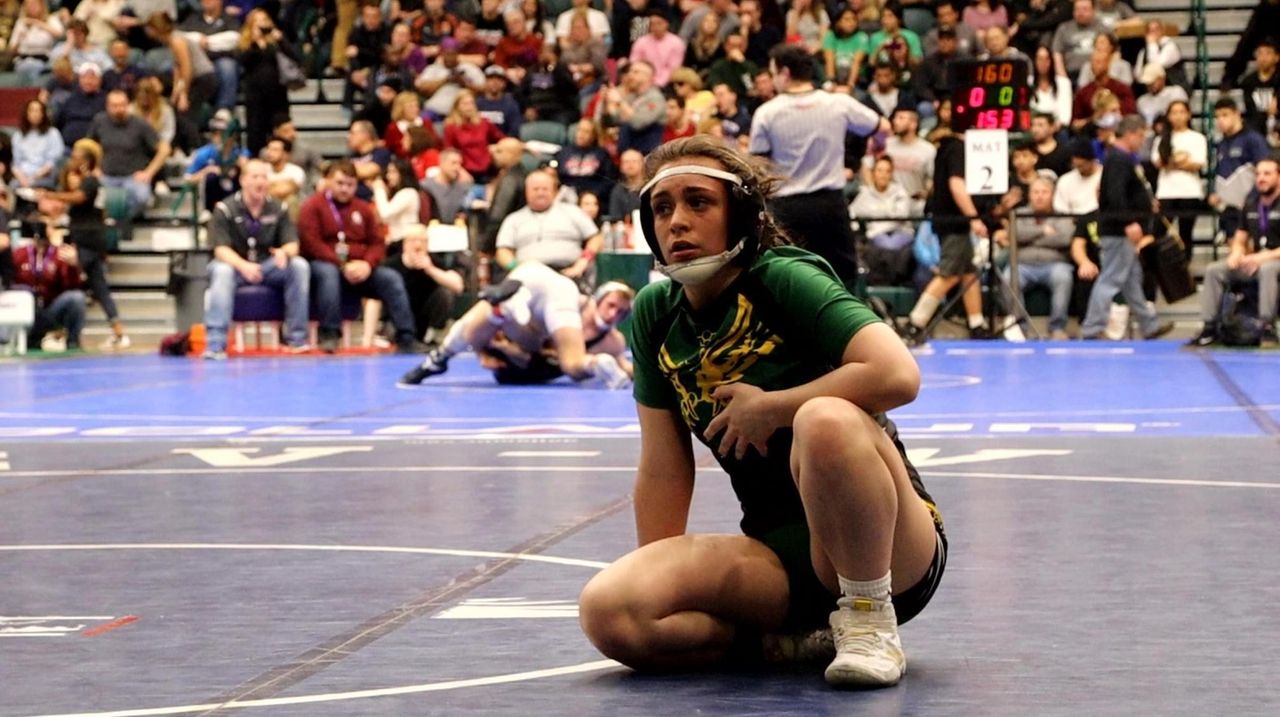 She became the first girl in Long Island to qualify for a boys sectional after she compiled a 4-1 record at 120 pounds in a Nassau qualifier last week. Credit: Pablo Garcia Corradi

Ally Fitzgerald said she was not nervous, just focused. A little bit of nerves would have been understandable.

She was about to wrestle in the first round of the Nassau wrestling sectional Saturday afternoon before a packed house at Farmingdale State College. It was a historic moment in the 63 years of the Nassau sectional — a girl, going where no girl had gone before.

Fitzgerald became the first girl in Long Island to qualify for a boys sectional tournament after she compiled a 4-1 record at 120 pounds in a Nassau qualifier last week at Long Beach.

She went onto mat two from behind the scorer’s table to a huge round of applause. She warmed up listening to, “Whats My Name” by DMX on her white Beats. She then traded the headphones for headgear and tucked her ponytail up into the straps.

Lynbrook’s Fitzgerald, in a random draw, was pitted against highly regarded and state place-winner Josiah Encarnacion of Wantagh, who is headed to the University of Virginia on a wrestling scholarship.

She showed no fear, no emotion.

Fitzgerald and Encarnacion each countered early takedown attempts in the first minute before Encarnacion was successful on a deep single-leg takedown for a 2-0 lead with 24 seconds left in the period.

Encarnacion took over the match in the second period and built a 14-5 lead before winning by technical fall in 5:31.

“She’s really hard to pin because she’s so flexible and strong,” Encarnacion said. “I was hoping we didn’t have to wrestle each other because we’ve trained together. I have so much respect for Ally and only hope she does well the rest of the tournament.”

Fitzgerald took the loss in stride and was adamant about her ability to focus on the next match and forget the first round.

“Josiah is an amazing wrestler,” she said. “Of all the people, of course, I had to draw him in the first round. It wasn’t my best match but he’s also a superior wrestler. He pushed me throughout the bout and kept getting that ankle pick for the takedowns.”

Fitzgerald (28-9) bounced back from the opening-round setback with a spirited bout against Manhasset’s Joe Albanese.

“I thought there was more pressure in her second bout because she wanted to place so badly,” Lynbrook coach Rich Renz said. “She wanted to make a statement that she belonged in the tournament. And I thought she did that.”

Albanese got in on a deep single leg, but Fitzgerald countered with a well-timed head chalice and tossed Albanese to his back for a 2-0 lead late in the first period. Albanese started on top in the second period and worked Fitzgerald to her back twice for five near-fall points and a 5-2 lead.

Fitzgerald gained another third-period takedown and trailed 6-4 before allowing an uncontested escape with seven seconds remaining in the 7-4 final.

“She’s exhausted and disappointed but she can be proud,” Renz said. “I’m super proud of her. She has so much courage to be out here and competing. She has bigger challenges on the horizon.”

“It’s the first time we had to accommodate a girl at this level of wrestling,” said John Mankowich, the coordinator for Nassau wrestling. “We had to secure a female trainer for the weigh-in at 8 a.m. for Ally. And she had to have her own locker room with a shower at the facility. It all went fairly smooth as her inclusion in the tournament raised the level of interest.”

Wantagh coach Paul Gillespie, who coached 20 years at Long Beach and the past 10 for the Warriors, shared his thoughts on Fitzgerald.

“My first thought is that she’s so tough and I think she’s great,” Gillespie said. “She’s won Cadet Nationals and traveled out to Fargo in the big-time tournament for girls and [it went] extremely well. And Josiah knows how good she is on the mat. He knows girls are out there to compete like any boy. I don’t think he could have pinned her, so he went to outwrestle her. She’s going to compete for Junior Worlds and the Olympics.”

Fitzgerald embraced her opportunity with grace. She said the failure to win a bout will bother her — until next year.

“I’ll be back,” she said. “My immediate goals will be to win at the national tournaments in freestyle in Virginia at the Cadet Junior World team trails and in Texas.”

“She’s great for girls that want to wrestle, a true trailblazer in the sport,” Mankowich said. “She inspires other girls to believe that they can do things they never thought were possible. And if she continues to work, her skill set with take her to the next level for college.”