With two minutes remaining in the match and the score tied 0-0, it was decision time.

Max Yahre and his coaches at Plainview-Old Bethpage JFK decided to give Massapequa’s Jeremy Scutellaro the first point by letting him up.

From that point, it was all Scutellaro.

Scutellaro secured three takedowns in the final period to pick up a 7-1 victory and capture the 152-pound title at the Nassau Division I wrestling championships at Farmingdale State on Sunday night.

“I felt that they had confidence on his feet when he let me up,” Scutellaro said. “I’m pretty good on bottom, so I think he would have rode me out for a little bit but I would have gotten back to neutral. The fact he let me up gave me a little momentum and that push to take him down on my feet.”

“It was all about just keeping your composure,” Massapequa coach Ron Serrano said. “In a time like that, a lot of kids tend to panic when it gets tough. We talk about mental imagery every day and it definitely paid off. He was cool, calm, collected and I’m very proud of him.”

The win was extra sweet for Scutellaro after he fell in the final at 145 last season.

“This is a dream come true,” Scutellaro said. “Last year was a disappointment but I’m glad this year everything worked out.” 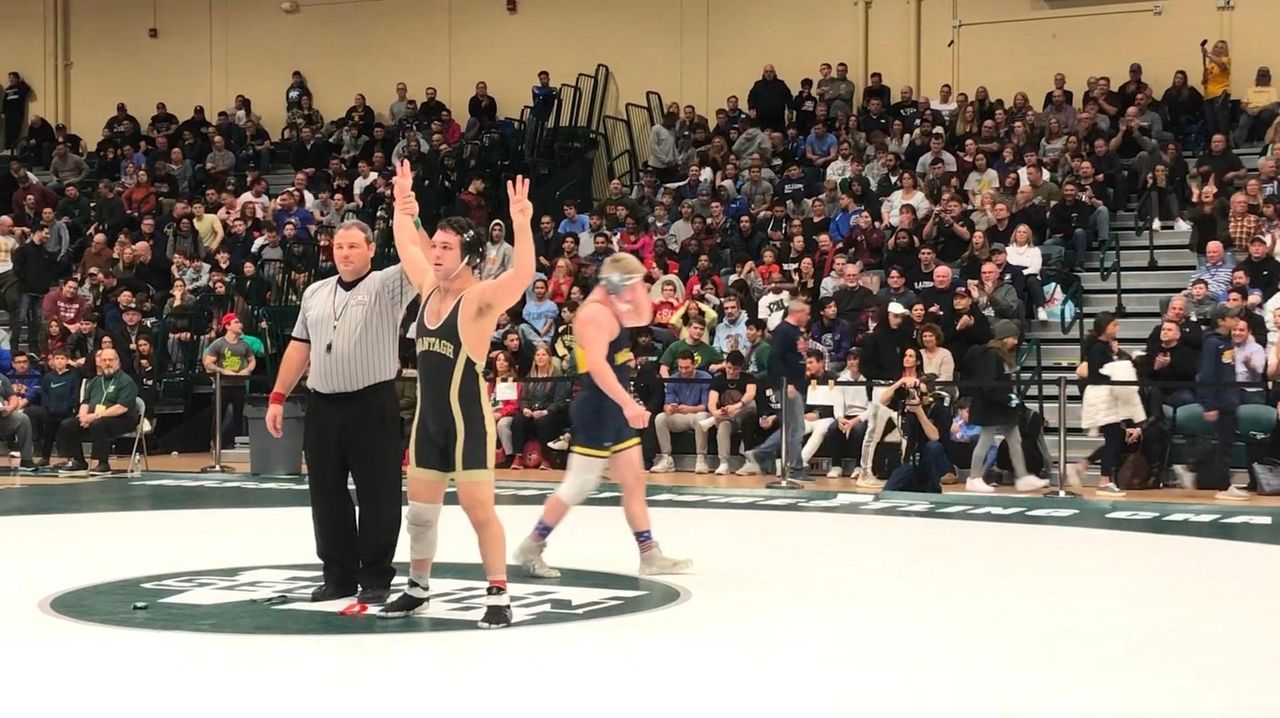 MacArthur’s Jake Schneider also had some decisions to make entering the final period.

The defending 126-pound champion trailed 7-2 late in the second period against Long Beach’s Amir Hodge and still faced a 7-4 deficit as the match headed into the third.

“With all the hard work I did over the summer, I knew I could come back and this was the match I had to do it,” Schneider said. “I knew I had it in me. I’ve been down plenty of times in my career but that was definitely the biggest match I’ve ever come back in. I just rely on all the offseason work and I knew I had to keep going.”

Schneider was able to get a takedown to get to within 7-6 and got back points to take the lead before securing a pin of Hodge in 5:45 to win the championship at 132 pounds.

“I knew the pin was big because we were also very close in the team title race,” Schneider said. “That was important.”

MacArthur captured the team title with 239.5 points. Massapequa was second with 234 and Wantagh (186.5) was third.

Ben and Matt Rogers of Wantagh each won titles, becoming the first brothers to win Nassau titles in the same year since Dan and Billy Calvacca of MacArthur in 2005.

Matt pinned Frank Kempton of Massapequa in 3:20 and Ben won a 13-8 decision over Jordan Pommells of Uniondale at 138.

“It was awesome because he works just as hard as I do,” Matt Rogers said. “We both put in so much time and I really felt that we deserved this.”

It was Matt’s third straight Nassau title and the first for Ben after finishing second last year at 120 pounds.

“I felt like I deserved this and I didn’t want to feel the same way I did last year,” Ben said. “I wanted to go home happy. Mentally, I was more prepared and I made sure to make the right choices in the match.”

In the final bout of the night two-time Nassau champion Chase Liardi squared off against three-time champion Josiah Encarnacion at 120 and it lived up to the hype. Liardi pulled out a 2-1 victory with an escape in the ultimate tiebreaker.