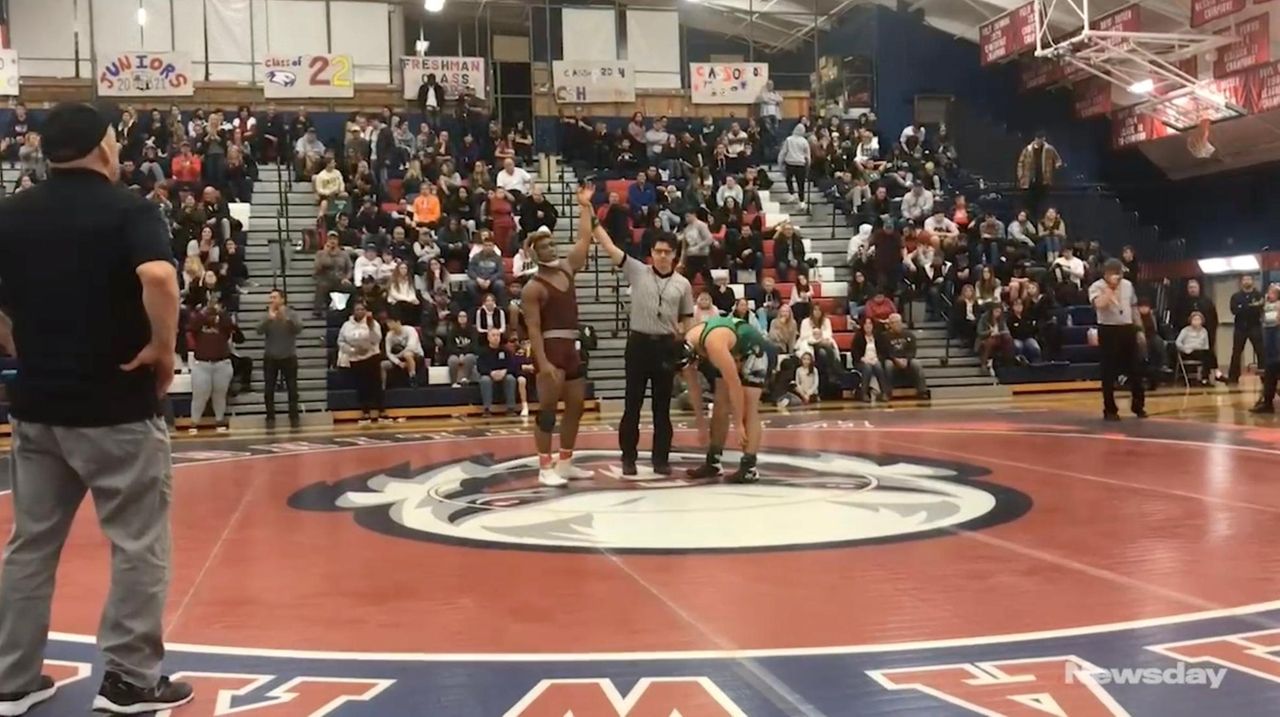 It wasn’t easy for Clarke’s Karl Osmond-Bouyer Saturday night at the Nassau Division II wrestling championship but he got the job done.

He knocked off Seaford’s Nick Luciano 7-3 to capture the championship at 220 pounds.

“This has been great to be a part of,” Osmond-Bouyer said. “As a senior it’s great to see our whole team really buy into what we’re doing. I don’t really think about being a leader as much as I just go out and wrestle and let my actions speak instead of my words.”

Cold Spring Harbor’s Christian Hansen was another who was no stranger to winning a D-II championship.

But for him it was a little different. The junior defeated Michael Forte of Clarke, 12-0, to win his first title since he won the 99 pound championship as a seventh grader in 2016.

“I came up here when I was 12 years old and I’m 17 now and my feelings haven’t changed about this place, I love it and it’s my home,” Hansen said. “I was nostalgic. It’s a different mat but it brought back the same feelings.”

For the last two years Hansen wrestled - and won - at St. Anthony’s. Hansen won two CHSAA state titles and reached the quarterfinals of the Division I state tournament last season.

“When I found out he was coming back I was overjoyed,” Cold Spring Harbor junior Gaven Bell said. “He’s an absolute stud.”

Unfortunately for Bell, the 2019 D-II champion at 160, an elbow injury just before the state dual meet tournament ended his season.

“I knew we had an opportunity to both become state champs,” Bell said. “That can’t happen for me now but I know he’s going to win. This is his year.”

Back when Hansen was in seventh grade it was Wheatley’s Joe Contrastano who he beat to win that title. Contrastano hasn’t lost a match in the Division II tournament since.

Now a senior, he pinned Nick DiCanio of Seaford in 40 seconds to win his fourth county title, this time at 120.

“I remember that match with Christian,” Contrastano said. “I had the flu actually,” he laughed. “But he’s a friend and I’m glad he’s back here because he really likes his school and where he came from. This is the spot for him.”

They’ll both be traveling to Albany to take part in the state tournament beginning Friday, February 28.

“I put in an armbar and got a cross wrist and ran it,” Contrastano said about his match. “I ran two bars today and pinned all my guys in less than 40 seconds so I had a good day.”

Contrastano hopes to carry over the momentum into the state tournament.

“I’m feeling really good going into states,” Contrastano said. “I’m going to have a really tough guy, Anthony Noto, who will be the one seed in my bracket but I definitely feel like I can take it to him and put it on him because I’m happy with the way I’m wrestling.”

Jackson Polo is another wrestler heading up state for the second time after defeating Ryan Romano of Island Trees, 13-7, at 113. It was a match up of last season’s 99 and 106 pounds champions.

“I wrestled him in a really tough match early in the season but I knew if I stuck to my game plan I’d come out ahead again," Polo said

Polo got out to an early lead with a take down and it stayed close until the very end.

“Knowing that he already won a county title kind of gave me a little different perspective going into the match,” Polo said. “But I still try to prepare the same way and wrestle hard.”

“I’m happy with my performance today and I’m going to keep going with the same training, the same regimen to keep it going,” DeNatale said. “I want to be peaking right when I get to states, that’s always the goal.”