Rocky Point senior Aidan Hamilton said he has savored every moment in this shortened wrestling season. And he’s making the most of every opportunity.

As he warmed up behind the bench, the 189-pounder watched the Eagles squander a 21-point lead as Mount Sinai shifted the momentum with three consecutive pins to cut the deficit to three points.

Opportunity was knocking. And Hamilton was ready.

"There’s a lot of respect and emotion in the gym when our teams meet," said Hamilton, who will wrestle at Roanoke College in Virginia. "We got out to a big lead and they came right back and had all the momentum. We needed a spark."

Hamilton re-ignited the Rocky Point bench with a 12-4 win over Chris Goodrich and the major decision propelled Rocky Point to win five straight bouts and go on to a 40-24 victory over Mount Sinai in a battle of north shore neighbors.

"We had the right guy to stop the momentum and give us life," Rocky Point’s honorary coach Brennan Strovink said. "And the guys fed off that big win and we rolled. It was such a spirited dual meet between two great teams. And it was so much fun coaching against my Dad on the other side of the mat."

Mount Sinai, winners of two of the past three state Division II dual-meet titles, and Rocky Point, which has won the Suffolk dual meet crown three times in the past six years, wrestled before an empty gym as fans tuned in to the Facebook Live broadcast.

"They wrestle a very tough, physical style, an Iowa type style at Rocky Point and that worked against us," Mount Sinai honorary coach Eric Strovink said. "We had a big comeback win with Kevin Goodrich at 160 and grabbed the momentum for a while."

Goodrich turned a 9-2 deficit into a third period pin over Joe Cecere in 4:59 to get the Mustangs within 21-12. Junior Tristan Nardi, in his fourth year on varsity, was fired up after the Goodrich comeback win. He gained a lightning fast takedown in five seconds and worked Dom Russo to his back at 172 pounds before gaining the pin in 58 seconds. 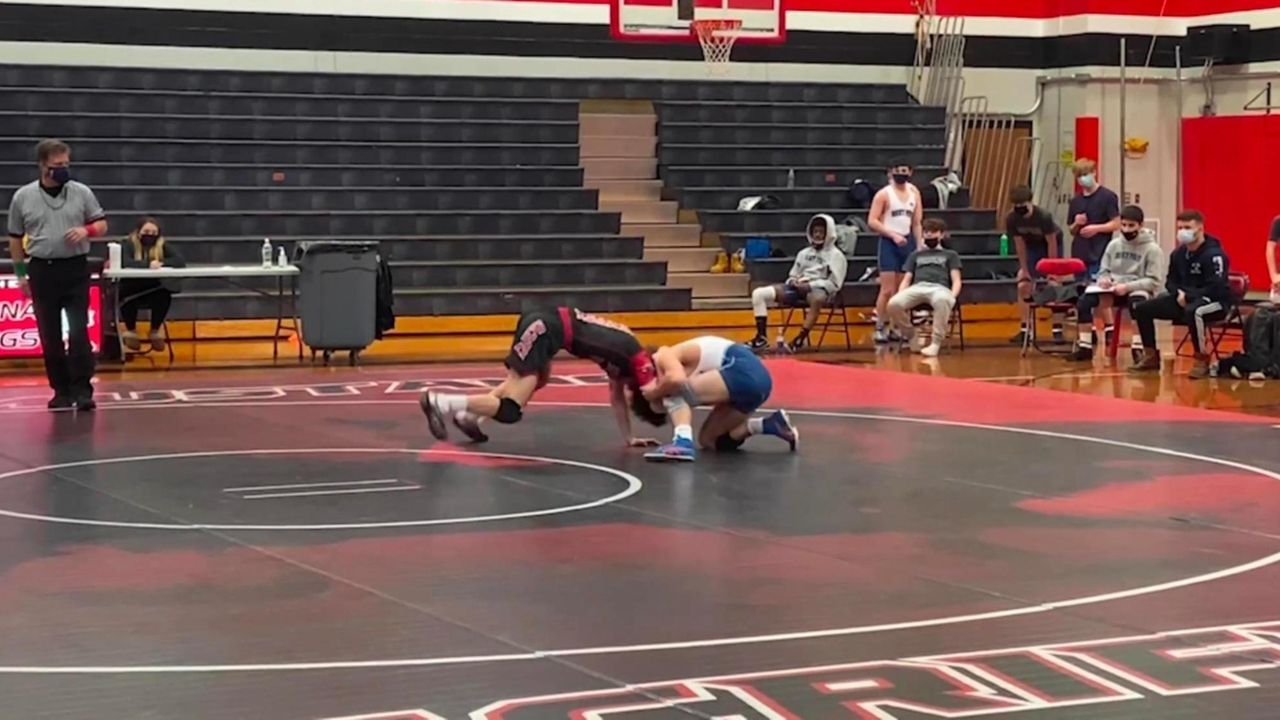 "Kevin pulled the upset and it put us on the right track," Nardi said. "And I wanted to keep it going."

Mount Sinai climbed to within 21-18 but got no closer. Rocky Point reeled off four decisions and a pin to seal the win. Eagles eighth-grader Aidan Donohue beat Mount Sinai eighth-grader Matt Cuccinello, 8-1, at 102 pounds for a 34-18 lead to clinch the dual meet.

"This was a good day for wrestling," Rocky Point coach Darren Goldstein said. "We had a special father-son showdown in the coaching ranks. Eric and Brennan are loved by everyone. And our wrestlers put it all out there. It was fun to sit back and watch them coach. The spirit and the atmosphere in the gym, even without the fans, was still awesome."