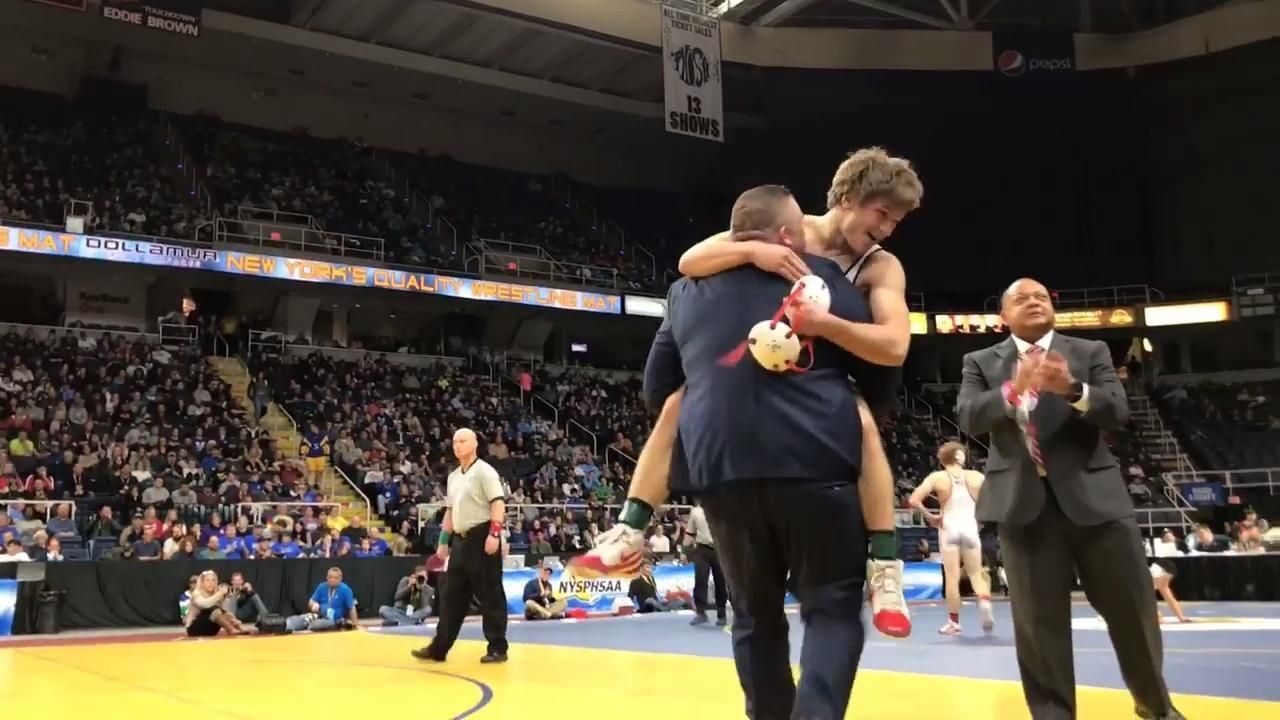 Kyle Mosher of South Side/East Rockaway defeated Cooper Kropman of Penfield in the Division I 160-pound semifinal at the 2019 NYSPHSAA State Championships at the Times-Union Center in Albany on Saturday, Feb. 23, 2019.    Credit: Newsday / Melissa Kramer

The South Side senior had placed in the state tournament in each of the last four years, but had never been able to capture a state title. That changed on Saturday night as he defeated top-seeded Cooper Kropman of Penfield, 8-0, in the Division I 160-pound final at the Times Union Center in Albany.

It was a victory that Mosher said was a long time coming, but one he was more than happy to wait for.

Mosher, who finished the season 45-1, had never wrestled in a state final before, but said after defeating Grand Island’s Adam Daghestani 15-0 in the semifinals, he was confident heading into the title match.

“I knew after I won [the semifinal], I was going to go all the way,” Mosher said. “It was relief getting over that hump, honestly.”

Mosher jumped out to a quick 2-0 lead in the first period of the final and kept Kropman on his toes throughout the match. He added that he didn’t change his approach from previous matches, but South Side coach Mike Robinson said he saw something different in Mosher’s emotional mindset.

“He had an intense look in his eye all evening,” Robinson said. “Something I’d never seen from him, like someone had stolen something and he had to go get it back.”

Mosher continued to attack in the waning minutes of the match, padding his lead and wrapping up the state tournament without giving up a point. He recorded a pair of pins in the opening two rounds on Friday.

“That was one of my goals all weekend,” Mosher said. “Not letting up any points makes it that much easier and that’s what it’s all about.”

Uniondale’s Xavier Pommells fell short of the state championship in the 132-pound weight class, losing 8-5 to fifth-seeded Alex Samson of Victor in Section V. Samson scored a takedown for the three-point lead with 41 seconds left and Pommells admitted he was disappointed with the finish.

“I thought I also had two at the end there,” said Pommells, who defeated Massapequa’s Mike Blando, 7-6, in the semifinals. “I thought I had it secured. It didn’t go my way unfortunately. I end the season with a sting.”

MacArthur’s Killian Foy, who defeated top-seeded Anthony Conetta of Massapequa, 5-4, in the semifinals, fell 17-5 in the 99-pound final to Hilton’s Gregor McNeil. Wantagh’s Josiah Encarnacion was pinned by three-time defending state champ Greg Diakomihalis of Hilton in 1:09 at 113. Massapequa’s Angelo Petrakis lost by technical fall, 19-3, to New Rochelle’s Jake Logan at 182. Freeport’s Myles Norris, who came into the tournament unseeded, fell 4-2 to Commack’s Joey Slackman in the 285 final.

Mosher, meanwhile, walked off the mat a champion, a smile plastered on his face and the certainty that, after years of waiting, he finally proved himself.

“This year, everything fell into place and I wrestled the best I could,” Mosher said. “It means the world to take the title home and it’s something I’ll have forever.”