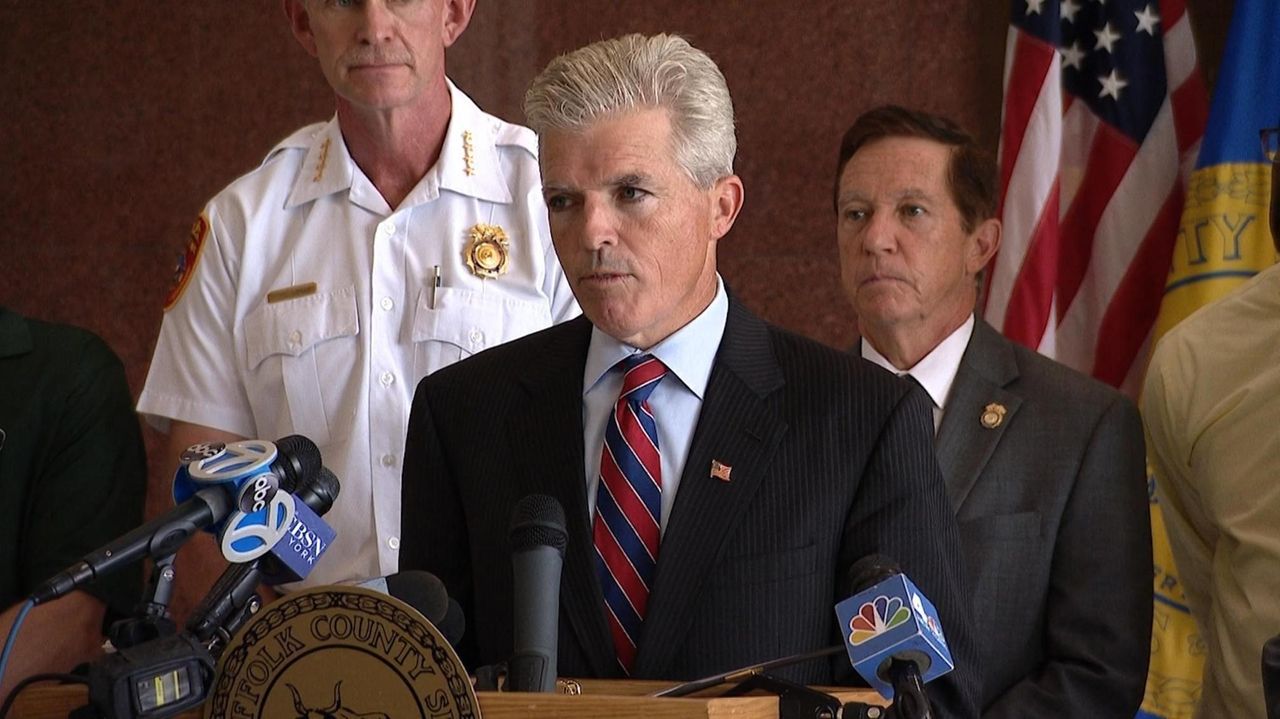 Wyandanch Memorial High School will receive a $150,000 grant from the Suffolk Police Department to help fundraising efforts aimed at keeping the school’s sports programs afloat, Suffolk County Executive Steve Bellone announced Thursday. Bellone said the funding will come from a state grant awarded to Suffolk police in July to fight gangs. The money will help Wyandanch administrators as they attempt to raise $350,000 in donations to save this school year's sports programs. Credit: News 12 Long Island

Bellone said the funding will come from a $250,000 state grant awarded to Suffolk police in July to fight gangs. The money will help Wyandanch administrators as they attempt to raise $350,000 in donations to save this school year's sports programs.

Steve Castleton, a local philanthropist who attended the news conference held at Suffolk County offices in Hauppauge, said he is donating $10,000 and “I’ve already contacted other community leaders” asking for their donations as well.

Funding for Wyandanch’s high school sports programs was cut in the  $69 million contingency budget the district adopted in June after voters failed to pass two budget proposals. Both rejected budgets would have raised taxes beyond the state's allowable cap — the first by more than 40 percent, the second by 20 percent.

Sibblies said this week the school was looking for $300,000, but Bellone said at Thursday's news conference the school needed to raise $350,000. Afterward, school district spokesman Nathan Jackson clarified that $350,000 was the amount needed to operate the same high school sports programs as a year ago.

Working under a contingency budget forced the school to lay off 30 teachers and dozens of other employees, consolidate student bus routes and drop after-school activities.

Sibblies, who is from the Bronx and attended Hofstra University on a football scholarship, has led the school’s summerlong fundraising efforts to keep the sports operating because he said it provides a motivational tool to keep teenagers coming to school.

He said several students reached out to him over the summer, saying they didn’t want to return to school after learning there wouldn’t be sports teams.

“These phone calls and texts that I received did not allow me to sleep at night,” he said.

Sibblies said he contacted Mention-Lewis, with whom he has worked with in the past. The deputy commissioner said targeting a portion of the $250,000 grant to Wyandanch would keep teenagers off the street.

“We’ve been focused on at-risk communities for a while now, and when we found out that Wyandanch youth would not have sports, we knew this was an issue we would have to address as a department,” she said.

Added Bellone: "Fighting gangs through law enforcement is not enough. We have to provide programs and outlets for young people that keep them engaged, energized, active and keeps them moving in the right direction. That's what high school sports does."

Bellone said he will have to call an emergency meeting of the county’s waiver committee to approve the $150,000 grant to the school district.

Sibblies said $100,000 in private financing was needed to cover its fall sports teams, which include football, boys and girls soccer, and junior varsity volleyball. Practices for those teams begin Monday.

Sibblies said the school received about a dozen calls from people  looking to donate after reading about the school’s plight in Thursday’s editions of Newsday.