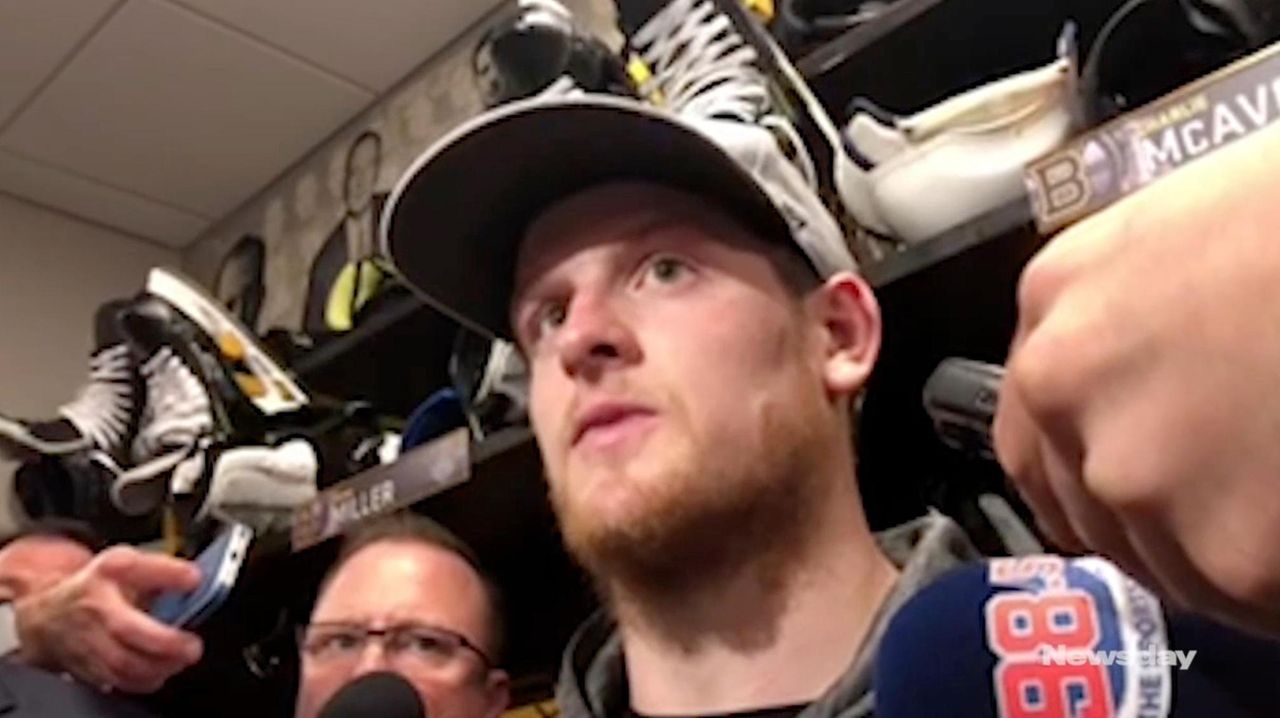 Defenseman Torey Krug talks about his impactful hit in Game 1 of the Stanley Cup Finals on Monday, May 27, 2019. Boston leads the series after their 4-2 victory over the St. Louis Blues. Credit: Newsday / Ted Starkey

Sean Kuraly scored to break a third-period tie and assisted on another goal to help the Boston Bruins rally from a two-goal deficit and beat the St. Louis Blues 4-2 on Monday night in Game 1 of the Stanley Cup Final.

Long Beach native Charlie McAvoy, making his Stanley Cup Final debut for the Bruins, scored his first career Final goal in the second period, tying the game at two with a power-play tally that beat a pair of Blues defenders and netminder Jordan Binnington. The defenseman celebrated by leaping into the glass as the TD Garden crowd roared its approval.

It was McAvoy’s eighth point of the postseason, second goal this spring and first score since the Bruins' first-round series against Toronto. It also marked the first time a Long Island skater scored a goal in the Stanley Cup Final.

Tuukka Rask stopped 18 shots for Boston, which fell behind 2-0 on goals from Brayden Schenn and Vladimir Tarasenko. But the Bruins outshot the Blues 18-3 in the second period — and 38-20 in the game — to take the opener in the best-of-seven series. 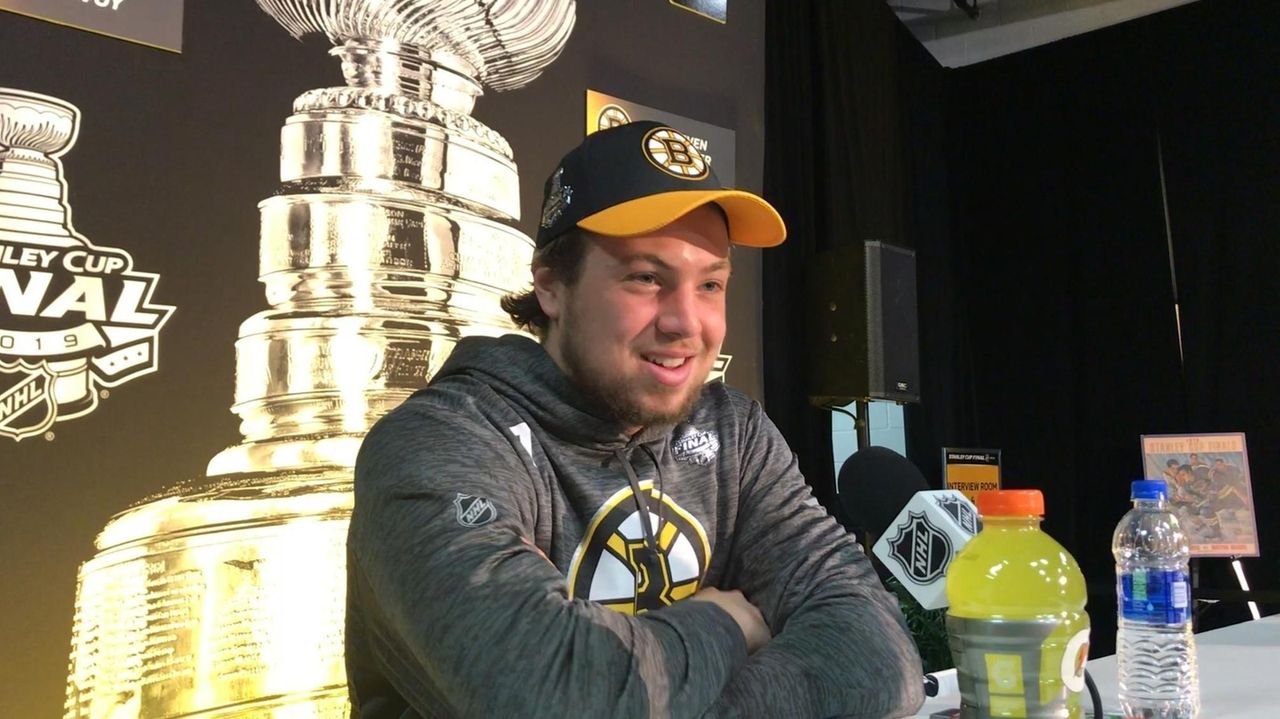 LI's McAvoy talks first trip to Stanley Cup Final Bruins defenseman Charlie McAvoy, from Long Beach, will skate in his first Stanley Cup Final game Monday night in Boston against the St. Louis Blues. He talked on Sunday about the feeling of being there. Credit: Newsday / Ted Starkey

Brad Marchand added an empty netter to clinch it.

Forty-nine years after Bobby Orr flew through the air following his Cup-clinching goal against St. Louis in the 1970 final, Boston defensemen Connor Clifton and McAvoy scored in the second period to tie it.

Binnington made 34 saves for the Blues, who haven't been back to the final since then. Game 2 is Wednesday night.

It had been 17,914 days since the Blues' last appearance in the Stanley Cup Final, when they lost to Orr's Bruins in four games.

They ran into a familiar problem: The Boston defense.

After taking advantage of Boston's slow start — the Bruins hadn't played since sweeping the Carolina Hurricanes in the conference final on May 16 — St. Louis jumped to a 2-0 lead.

Schenn made it 1-0 lead midway through the first period on a third-chance shot. In the first minute of the second, David Pastrnak got sloppy behind the Bruins' net and Schenn was there again, this time to pass it to Tarasenko in the slot to make it 2-0.

But just 76 seconds later, Clifton tipped in a pass from Kuraly to cut the deficit to one goal. And in the middle of the second, on the Bruins' fourth power play of the game, McAvoy came right up the middle and wristed it past Binnington's glove to tie it.

It was still tied five minutes into the third when Noel Acciari, on Binnington's left, made a spin move and swept the puck across the crease to Kuraly. He steadied it with his skate and then poked it in with his stick to give the Bruins their first lead of the game.

The crowd, which had previously been most excited to see the 2011 champions waving banners before the game, began a chant of "Let's Go Bruins!" Although David Krejci's penalty quieted the building, it came back to life when Torey Krug, angry over a scuffle with David Perron in front of the St. Louis net, sped down the ice helmetless and flattened Robert Thomas.

After the whistle, fans chanted "We want the Cup!"

Notes: Lil Nas X and Chase Rice, who performed a concert in City Hall Plaza before the game, were in attendance. They both got big cheers when shown on the video board, and the crowd erupted when Rice chugged a beer. ... Members of the Bruins 2011 Stanley Cup championship team took part in pregame banner ceremonies. Five players on the current roster were on that team: Rask, Patrice Bergeron, Brad Marchand, David Krejci and Zdeno Chara. ... The Blues scored the first goal for the 14th time in 20 playoff games. They had been 10-3 when scoring first, and 6-1 when leading after the first period. ... Blues D Vince Dunn missed his fourth straight game with an unspecified injury. ... Binnington stopped 83 of the previous 85 shots he faced through one period, dating back to Game 4 of the Western Conference finals.

Up next: The Bruins would be halfway to their seventh NHL title with victory on Wednesday night at home. It would be their first since 2011. They lost to Chicago in the 2013 final.

Long Island athletes in the pros nowMeet the locals who are active pro athletes in football, baseball, basketball, hockey and soccer.

1:43
Yankees still looking for a spark as slow start to season continues
German sent to alternate site after Yankees fall to Rays again
Lennon: Support is not a two-way street for deGrom and Mets
Logan: Marks deserves recognition, not scorn, for assembling elite roster
Judge back in lineup after missing two games
Johnson impresses Nash, but will he stay with Nets beyond Sunday?
Didn’t find what you were looking for?