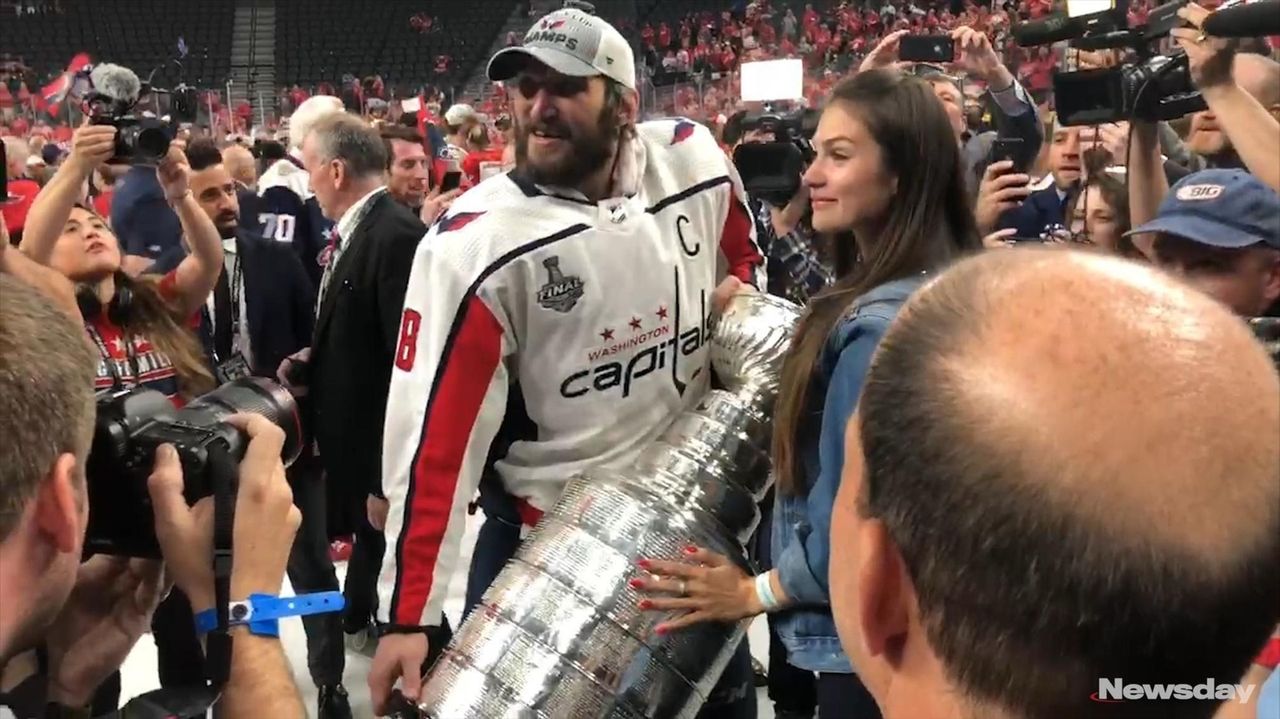 On Thursday, the Washington Capitals defeated the Vegas Golden Knights to win their first Stanley Cup Championship in franchise history. Here are some sights and sounds from the ice after they won. Credit: Newsday / Ted Starkey

LAS VEGAS — The Washington Capitals won eight games as an expansion franchise in 1974-75, still the worst season in NHL history.

They arrived in the Stanley Cup Final 43 years later to face history’s best expansion team in any sport. The Vegas Golden Knights crashed hockey’s biggest party less than a year after creating a roster in the expansion draft.

It turns out the party really does end at some point in Las Vegas, though, but this time only for the home team.

Washington erased a third-period deficit with two goals in less than three minutes and survived a late Vegas push to win the Stanley Cup with a 4-3 victory in Game 5. The Capitals lost the opening contest, then won four consecutive games to end their championship drought.

The Capitals made Alex Ovechkin a Stanley Cup champion for the first time in his storied 13-year career. Ovechkin won the Conn Smythe Trophy as the most valuable player throughout the four rounds of the playoffs.

“I can’t explain how I feel,” Ovechkin said on the ice after the game. “It’s unbelievable.”

Ovechkin winning a Cup felt fated from when the Capitals drafted him first overall in 2004. Despite 607 goals on his way to the Hall of Fame, the Cup eluded Ovechkin year after year as the Capitals built a resume of staggering playoff failure.

No more: Ovechkin and the Capitals’ names are now etched on the Cup forever.

“We did this together, but Alex has been through a lot,” Capitals defenseman Matt Niskanen said. “He’s taken some heat in the past so man, that feels good to see him go out there and reach the pinnacle. Really happy for him. He was a stud this spring. He led the charge, he produced — played hard, blocked shots, ran people over. He did it all for us.”

Washington’s captain netted a franchise-record 15 goals in the playoffs, including a pretty one-timer on a power-play in Game 5. But for perhaps the first time, he received plenty of help from his teammates.

Evgeny Kuznetsov led all scorers in the playoffs with 32 points, including an assist on the Capitals first goal of the night. T.J. Oshie and Nicklas Backstrom combined for 44 points, and John Carlson and Matt Niskanen steadied a blue-line group that stifled Vegas over the last four games.

“We never really knew what it was going to take to win,” Oshie said. “You know, you lose and you think maybe you just didn’t get the bounces. But now you see that it takes an entire team to get this job done and that’s what we did.”

Washington goalie Braden Holtby flipped the series momentum in Game 2 with his remarkable diving stick save in the final minutes, and closed out Game 5 with 28 saves.

Capitals center Lars Eller scored the game-winning goal with just under eight minutes left. Eller battled for position near the crease and after Fleury stopped a shot from Brett Connolly, the puck fell right behind the netminder. Eller reached behind him and swept it into the net.

Devante Smith-Pelly tied the score at 3 roughly three minutes earlier. He started the opportunity on a strong forecheck that created a turnover in the right corner, then wheeled to the front of the net and — as he was falling down — wrapped a deflected puck around an outstretched Fleury.

Washington led twice in the second period, but Vegas grinded its way to a 3-2 lead at the end of the frame on goals by Nate Schmidt, David Perron and Reilly Smith.

Schmidt and Perron both scored unlikely tying goals that Capitals goalie Braden Holtby stood little chance of stopping. Schmidt’s seemingly harmless toss into traffic midway through the second period redirected past Holtby off the skate of Niskanen, tying the score at 1 at 9:40. The goal was Schmidt’s first point of the series.

Perron actually scored from his backside for the second Vegas goal. Following a power-play tally by Ovechkin that put Washington back in front 34 seconds after Schmidt’s goal, Vegas defenseman Colin Miller slid a shot from the left point that Tomas Tatar deflected toward Holtby.

Behind Holtby was Perron, who had been shoved toward the goalie’s legs and into the net by Washington defenseman Christian Djoos. Holtby fell and the puck floated right by him to knot the game at 2 at 12:56.

But in the end, it was Ovechkin and the Caps’ night.

“It’s just like a dream,”he said. “It was a hard, long season. We fight through it. We worked so hard through all the years and we were together. It was a whole one team, stick with the system and it doesn’t matter what happened, even after the [second] period, we knew we just have to push it and get the result done. That’s it.”