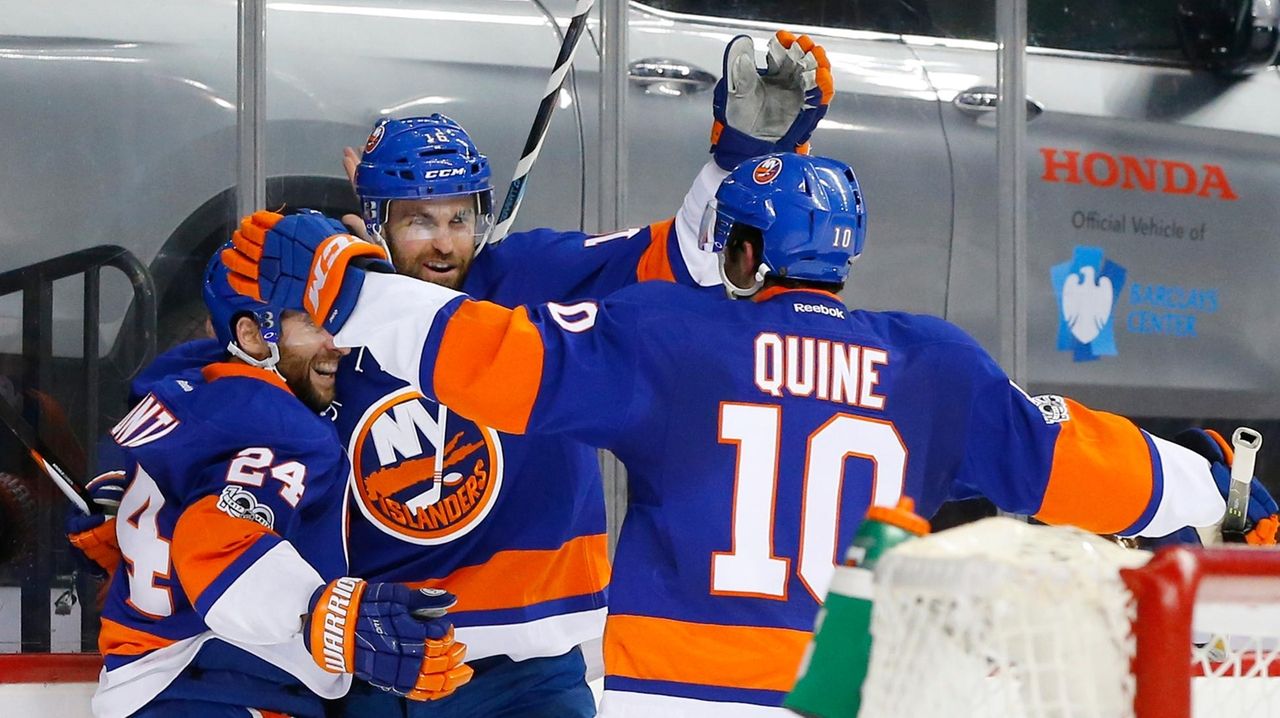 The Islanders bounced back against their archrivals on Thursday Feb. 16, 2017, beating the Rangers, 4-2, at Barclays Center. (Credit: Newsday / Chuck Fadely, Greg Inserillo)

To paraphrase a New York classic, it gets late early around here. That is the way it seems for the Islanders, who are desperate for every point. As Doug Weight said before coaching his first Rangers-Islanders game, “It’s April for us.”

That means if they are to reach the playoffs, they must approach every game now as if it were a playoff game. Or treat every game as if it were a meeting with the Rangers in a rivalry that is itself a New York classic. The Islanders were up to the urgency Thursday night at Barclays Center, securing two vital points in a 4-2 win.

“Obviously, against the Rangers, those games are not hard to get up for,” said Stephen Gionta, who stole the puck from Marc Staal in the corner and set up the first of Andrew Ladd’s two goals, which put the Islanders ahead to stay. “On top of that, there are the stakes this late in the season. We need every point we can get.”

A sellout crowd of 15,795 saw the home team move within a point of the Eastern Conference’s last playoff berth.

For the Islanders, it erased the bad taste of a 7-1 drubbing in Toronto two nights earlier. For the Rangers, who did not have nearly as much at stake, it ended a six-game winning streak and kept alive an annoying streak: They have lost all four of the games they have played at Barclays Center. As much as Islanders fans may dislike the (possibly temporary) new home, the Rangers may dislike it just as much.

“We just had a hard time making plays in their end tonight. We seem to be having issues in this building right now. Nothing we can do about that right now,” Rangers coach Alain Vigneault said after his team gave up a 1-0 lead and could not tie it after Jimmy Vesey’s power-play goal early in the third period cut the deficit to 3-2.

Rangers captain Ryan McDonagh, who was smacked in the face by Josh Bailey’s high stick with nine seconds left in the second period to set up a four-minute power play, said, “I don’t think we did enough to match their intensity. They certainly responded in the second and third period. We were chasing it a bit.”

The Islanders are doing an entirely different kind of chasing, having put themselves in pursuit of a few teams in the playoff hunt. But the game in Toronto, which was a second loss in three games, threatened to become a trend.

“All these games are pretty much playoff games for us,” said Anders Lee, who tied the score at 1-1 at 2:43 of the second period after taking an angular pass from Bailey. “It’s just keeping that excitement in the room. We’re in a position where we’re chasing down teams and it’s a fun one to be in, especially after the way we started the season. It’s just an exciting time. It’s easy to get up for a game like this, especially after getting thumped the other night.”

After Thomas Greiss made a few key saves, Gionta’s steal, spin and dish to Ladd, who beat Henrik Lundqvist at 6:24, put the Islanders up 2-1.

Perhaps the key play, though, was Nikolay Kulemin’s shorthanded goal during the Rangers’ four-minute power play early in the third. It occurred after John Tavares kept digging and kept the puck alive. Vigneault blamed it on “five guys standing around looking at two players in front of our net.”

Tavares attributed it to motivation. “Obviously, the urgency was high and we knew we had to respond,” he said. “These games are easy to get the emotions up.”

Maybe there still is a chance for the Islanders and Rangers to meet when it really is April.