Anthony Beauvillier of the New York Islanders is congratulated by teammates Mathew Barzal and Ryan Pulock after his second goal of the game in the first period against the Florida Panthers in Game 4 at Scotiabank Arena on Aug. 7, 2020 in Toronto, Ontario. Credit: Getty Images/Andre Ringuette/Freestyle Photo

The Islanders have accomplished very little toward their ultimate goal. But given the unique circumstances of this NHL postseason and the pandemic-filled four-and-a-half months that led up to it, their four-game win over the Panthers and how well they played in the best-of-five qualifying series is an impressive accomplishment.

They emphatically clinched the series and a berth in the NHL’s 16-team playoffs with a 5-1 win in Friday’s Game 4 at Scotiabank Arena in Toronto as Anthony Beauvillier scored twice and the Islanders’ penalty kill neutralized the Panthers’ potent power play, for the most part. In a nod to the times, the teams just bumped fists with their gloves still on during the traditional, post-series handshake line.

“It was a heck of a series,” top-line center Mathew Barzal said. “We know we just punched our ticket to the dance and it’s just starting. We know the intensity is going to get ramped up.”

Now,the Islanders wait to find out their first-round opponent. They  will face the third seed, which will be the winner of Sunday’s round-robin game between the Bruins and Capitals

The top four finishers in the Eastern Conference during the regular season that was halted on March 12 because of COVID-19 are playing a round-robin concurrent to the qualifying series to determine seeding.

Last season, the Islanders' first under the management tandem of president/general manager Lou Lamoriello and coach Barry Trotz, they swept the Penguins in the first round before being swept by the Hurricanes. They’re obviously aiming higher this season.

“We have a lot of confidence in our game and the style we play,” said defenseman Ryan Pulock, who made a momentum-turning play as he stretched out his stick to keep Panthers top-line center Aleksander Barkov from converting on an open look at the net just 28 seconds after Brock Nelson’s power-play goal had given the Islanders a 3-1 lead at 8:01 of the second period.

“We know if we can play our way and to our identity, it gives us a chance to win every night,” Pulock added. “Our focus was on this series coming in. We got that job done. The ultimate goal is the Stanley Cup. It’s just one day at a time to work toward that goal.”

The Islanders went 1-for-3 on the power play and the Panthers were 1-for-5. Four of the Panthers’ seven goals in the series came on the man advantage. 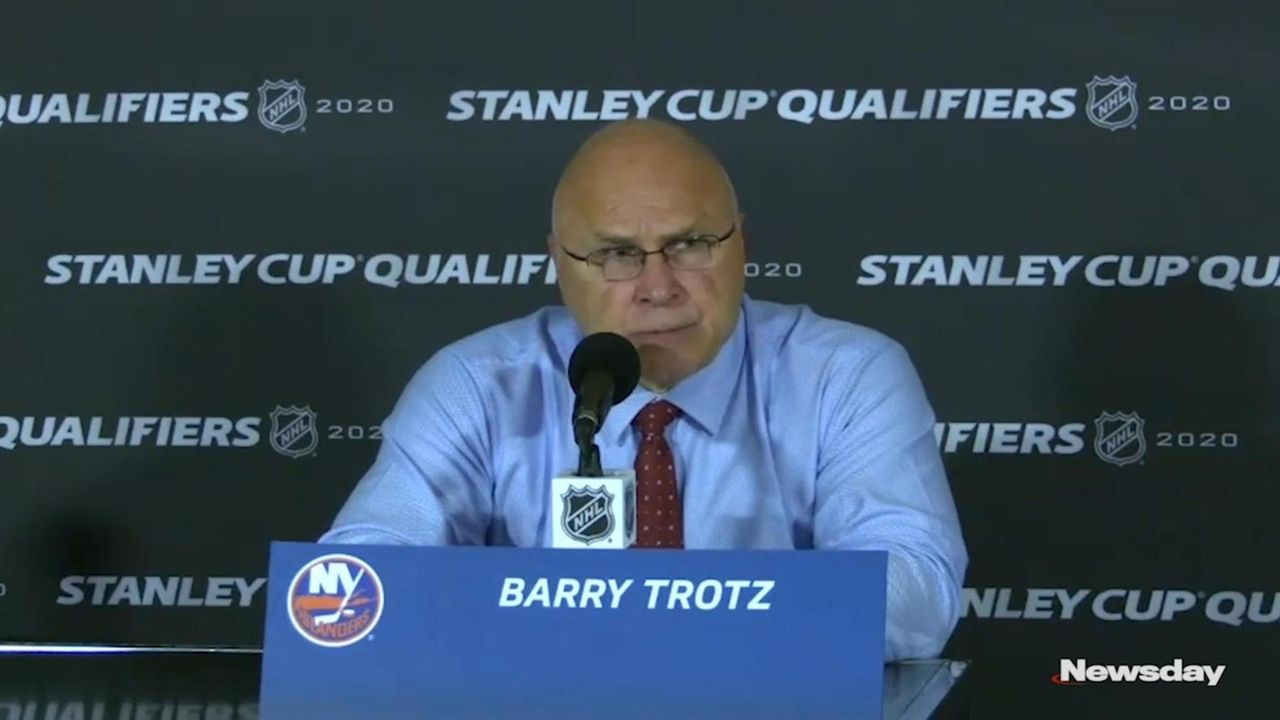 Islanders defeat Panthers in Game 4 to win series Anthony Beauvillier scored two goals as the Islanders beat the Florida Panthers, 5-1, in Game 4 of their best-of-five qualifying series on Aug. 7, 2020, to advance to the NHL's Stanley Cup Playoffs.  Credit: NY Islanders

Semyon Varlamov made 24 saves and Sergei Bobrovsky stopped 33 shots for the Panthers.

The complete effort in both ends mirrored the way the Islanders played during a franchise-record 15-0-2 streak from Oct. 12-Nov. 23. But the Islanders were on an 0-3-4 skid when the season was paused. The unplanned time off – small-group, voluntary workouts resumed on June 8 and Training Camp 2.0 began on July 13 – allowed defenseman Adam Pelech and center Casey Cizikas to return healthy and trade acquisitions Jean-Gabriel Pageau and defenseman Andy Greene to get more comfortable with their new teammates.

“Right across the board, for most of the teams in this play-in and the playoffs, a lot of credit goes to the players and the staff,” Trotz said. “Understanding the importance of what this is and embracing what this is. You’re seeing the NHL at a great level right now. You didn’t know what you’d expect but the players have dialed it in.”

The Islanders dominated the first period five-on-five, outshooting the Panthers 15-4 at even strength but Jordan Eberle’s careless hooking penalty on Panthers defenseman Keith Yandle in the offensive zone at 18:29 of the first period led to Mike Hoffman’s power-play goal just 12 seconds later.

Eberle sprung Barzal up ice for his first goal in the series, making it 4-1 at 10:34 of the third period. Pageau added an empty-netter at 17:17.

Defenseman Pulock makes huge save in Islanders' clinching winPulock stretched out his stick to stop scoring attempt by Panthers' top-line center Aleksander Barkov. Best: Beauvillier having fun as Islanders advanceThe winger scores twice in the clincher as the Isles advance to the round of 16. Isles vs. Panthers Game 4 photosThe Islanders play the Florida Panthers in Game 4 of their qualifying series on Friday, ... Islanders defeat Panthers in Game 4 to win seriesAnthony Beauvillier scored two goals as the Islanders beat the Florida Panthers, 5-1, in Game 4 of their ...