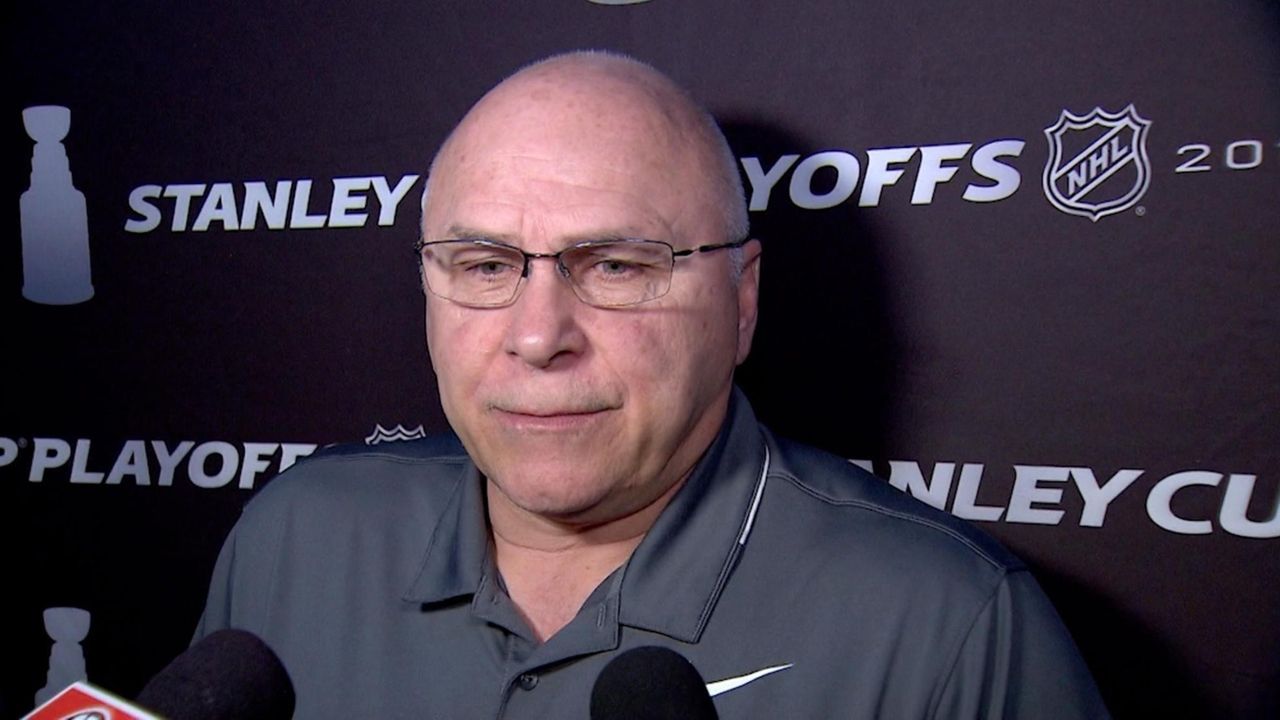 Islanders coach Barry Trotz knows the second-round playoff series vs. the Carolina Hurricanes is a race to four and his team is down, 2-0, but there is no panic right now in the Islanders' locker room just a sense of urgency. Credit: News 12 Long Island

With the Hurricanes halfway to a sweep as their second-round playoff series shifts to North Carolina for Game 3, Islanders coach Barry Trotz has given his team a clear-cut agenda.

“We’re going through some adversity. I don’t think we went through any in that first series,” he said on Monday at Northwell Health Ice Center in East Meadow after giving his players the day off from practice. “It’s how you respond. I said to them, ‘Hey, we’re going to Carolina to win two games. Plain and simple.’ You can’t win two unless you focus on the first.”

Game 3 is Wednesday night at PNC Arena in Raleigh.

The injury-depleted Hurricanes lost defenseman Trevor van Riemsdyk, No. 1 goalie Petr Mrazek and right wing Saku Maenalanen yet scored twice within 48 seconds early in the third period for a 2-1 win on Sunday afternoon at Barclays Center. The Islanders lost Game 1, 1-0, in overtime.

Van Riemsdyk and Maenalanen are out for the series. Hurricanes coach Rod Brind’Amour said Mrazek is day-to-day.

Trotz said right wing Cal Clutterbuck’s status is unclear after he exited late in Game 2 with an undisclosed injury.

“You’ve got to trust the process,” Trotz said. “I didn’t think after the game there was any panic. We know we’ve dug ourselves a little hole and there’s some urgency — urgency to get back in the series.

“You fall down 3-0, it’s going to have to be a real epic-type thing because you don’t want to dig yourself too far. But it’s a race to four and they’re up two.”

The Islanders, with home-ice advantage in the playoffs for the first time since 1988, swept their first-round series against the Penguins. The Hurricanes ousted the defending Stanley Cup champion Capitals with a 4-3 double-overtime win in Game 7 and won all three home games in that series.

Over their two series, the Hurricanes have won four straight and six of their last seven games.

There’s obviously a big jump to the postseason, but the Islanders also fared well on the road in the regular season. Their 24-14-3 mark tied them for the third-most road victories in the NHL.

Trotz has mentioned several times this season that the Islanders tend to simplify their game on the road because they are not trying to impress the home crowd. He called some of the Islanders’ play in the first two games “too cute,” particularly Clutterbuck’s intercepted back pass in overtime in Game 1 that led to Jordan Staal’s winner.

When it was suggested to Trotz on Monday that the road again could be a bit of a “haven” for the Islanders, he quickly responded, “It has to be.

“You can’t have any passengers. We’re going to have to go in there fully committed and, if we do that, it gives us a chance to have success. You don’t think about the big picture.”

Trotz emphasized that the Islanders need to get more goal production while continuing to out-chance the Hurricanes.

Brind’Amour told the media in Raleigh on Monday that the Hurricanes have to forecheck better.

“Even though we’ve lost two games, we’ve got some confidence,” Trotz said. “That’s undeniable. I don’t want to take anything away from Carolina. They’re a resilient bunch. So are we.”