Islanders co-owner Jon Ledecky stands amongst Stanley Cups as he speaks about the team and a new home at the Oak View Group's office at Broadway and 21st Street in Manhattan on Aug 12. Credit: Craig Ruttle

Islanders fans have waited a long time for an extended run in the Stanley Cup playoffs. They have waited even longer for a new arena to call home.

The talk of the team needing a new arena goes all the way back to its dynasty days, when the Islanders won four straight Stanley Cups from 1980-83. It was a topic that would cloud the franchise's future for decades.

“It’s been 30-plus years that good, smart people have been trying to build an arena,” Oak View Group chief executive officer Tim Leiweke said, “all without success.”

Despite a delay in construction because of the COVID-19 pandemic, the UBS Arena at Belmont Park is on target to open in time for the 2021-22 season.

Leiweke and Islanders co-owner Jon Ledecky, speaking at a group interview during the Islanders’ playoff game on Tuesday night, believe they succeeded where so many other Islanders projects failed because of the partnership of sports executives they formed years ago.

LOOKING FOR A PERMANENT HOME

Ledecky traces the roots of the partnership to when he and Malkin first bought into the Islanders in 2014 as minority owners, with the deal arranged to give Charles Wang two more years to run the team while Ledecky — a former Washington Capitals minority owner — learned behind the scenes.

In one of Ledecky’s first comments as the public face of the ownership group four years ago, he stressed the need for the Islanders to find a permanent home, and to not become “nomads.” It was hard for people familiar with the franchise’s history of arena sagas to not roll their eyes given how many architectural renderings have come and gone over the years.

Ledecky spent the first two years on what he calls “a listening tour,” traveling to NHL cities to meet with owners to learn how they did their job. On the topic of how to get an arena built on Long Island, Ledecky said, “Everywhere I went people said, Tim Leiweke.”

Leiweke, who at the time was the president of the company that owns the NHL's Toronto Maple Leafs, NBA's Toronto Raptors and their arena, was no stranger to the Islanders’ plight.

In 2009, Wang had grown frustrated with Town of Hempstead elected officials over trying to secure approvals for the Lighthouse Project, his $3.8 billion mixed-use proposal at the Nassau HUB that would have included a new Coliseum for the Islanders.

In a move meant to show the Hempstead politicians the Islanders had viable options to leave Long Island, Wang scheduled the team to play a  preseason game in Kansas City at a new arena that was openly seeking an NHL team.

That Kansas City arena’s boss at the time? Tim Leiweke.

In fact, a Newsday story at the time referred to him as “the man who could steal your Islanders.” Tuesday night, Leiweke laughed at the memory, insisting there was no truth to that. “I do remember the speculation that we were trying to steal the Islanders and we weren’t,” Leiweke said.

He said he’s always been a believer that teams should do everything in their power to make it work in their home market. And regarding the Islanders’ longstanding arena woes, he's always been taken aback when people questioned if Long Island would support them in a new arena.

“This wasn’t a troubled franchise,” he said. “This wasn’t a bad market hanging on for dear life — [like] Hartford — this wasn’t a team trying to battle above its weight to survive. This was the freaking New York Islanders, one of the legacy franchises.

“What's unique here, this was the New York Islanders with owners who could write the check, if they so choose.”

In 2015, amid Ledecky's listening tour, Leiweke left Toronto and formed Oak View Group with entertainment executive Irving Azoff. Ledecky and Malkin were sold that Leiweke would help them get an arena done, and the Islanders became their first client.

(Madison Square Garden also was an original part-owner in Oak View Group and later sold its stake in 2018.)

Also around the time the Islanders signed up with Oak View Group, Malkin and Wilpon began having conversations about Wilpon’s experience building Citi Field, which opened in 2009.

Wilpon, who grew up an Islanders fan in Roslyn, worked with Malkin in the mid-1980s and they have remained friends since. Wilpon has long been interested in teaming with the Islanders on projects, even meeting with Wang a decade ago about partnering on a new arena in Queens.

This time, Wilpon found a partner in Malkin, and by extension Leiweke. And the partnership behind UBS Arena came together at a fortuitous time for the Islanders.

By the time Ledecky and Malkin were set to take over control from Wang in the summer of 2016, it was clear that being a tenant at Brooklyn’s Barclays Center was not a viable long-term option.

“The Islanders needed a home,” Ledecky said. " . . . They knew this wasn’t just buying the Islanders. They knew at some point or another they’re going to need to do this.” 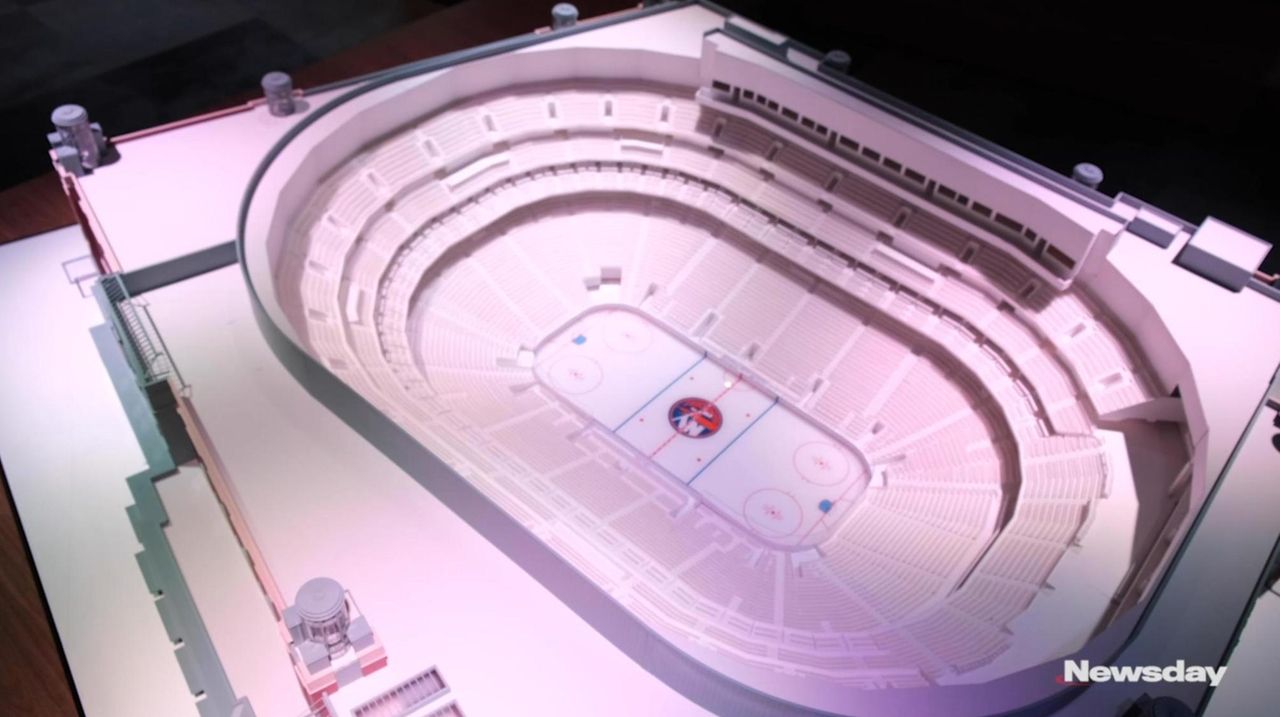 As the Islanders play playoff games in Toronto in the NHL's bubble, Ledecky spends game nights entertaining prospective ticket buyers in a setting that’s about the closest thing to experiencing live hockey in an arena these days. Except it’s in a Manhattan building.

An elevator ride up five floors delivers guests to a series of rooms retrofitted to resemble a future UBS Arena premium-seats experience, complete with a wood-paneled bar, brown leather chairs and pictures serving as a historian’s guide to Belmont Park.

What Ledecky and his arena partners are calling “The Preview Club” also serves as the latest reminder that they are accomplishing something long presumed to be impossible in Long Island political circles: a new home built for the Islanders.

On display at The Preview Club is a three-dimensional rendering of UBS Arena, detailed down to each of the 17,000 seats that will surround the ice inside the brick-and-mortar exterior facade.

Leiweke and Ledecky said the arena bowl and its sightlines were designed with hockey in mind, an ode to what Islanders fans loved most about the Coliseum.

"It's been," Leiweke said, "a long time coming for them."