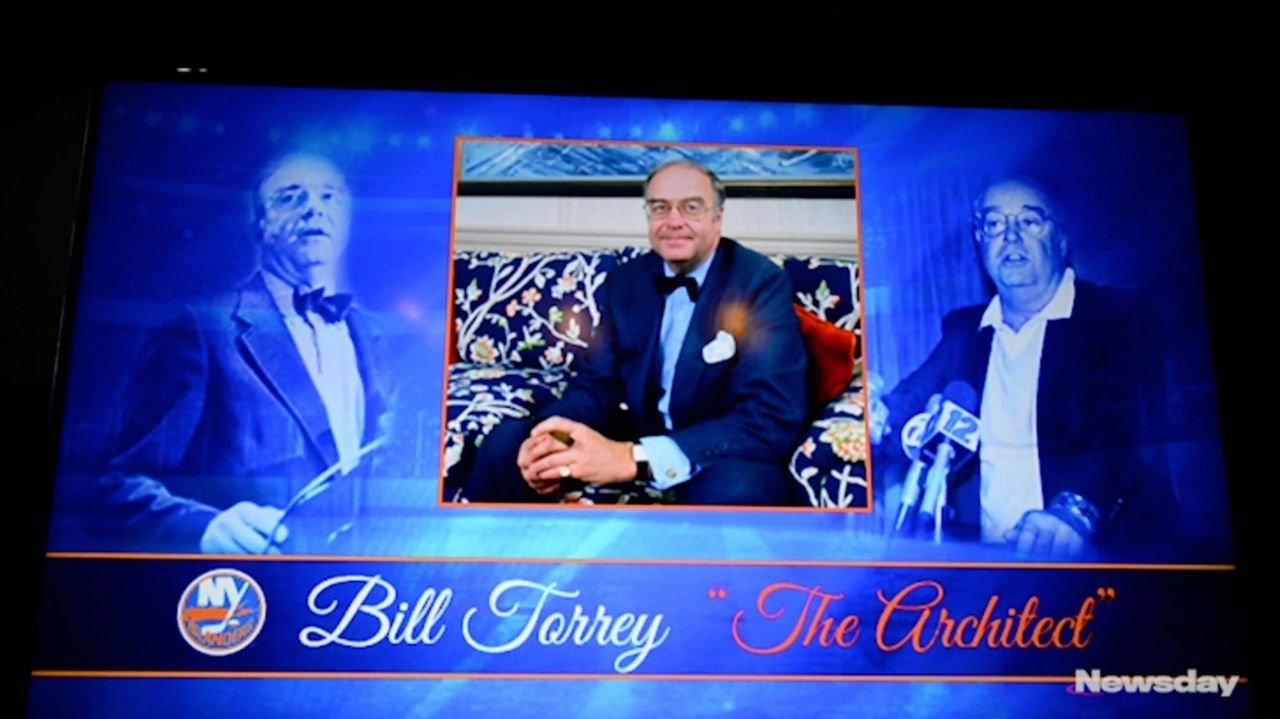 The names “Bill Torrey” and “New York Islanders” always have seemed synonymous, and probably not by accident, either. It was at the news conference on Feb. 15, 1972, called to introduce Torrey as the team’s general manager, that the expansion franchise’s name was revealed.

The familiar logo was unveiled that day, too, and the fact that it still has such resonance on Long Island is a tribute to the man who put the franchise together and led it to greatness. Torrey, who died last May, will be saluted in a ceremony before Saturday night’s game against the Flyers at his beloved Nassau Coliseum.

And the words “Bill Torrey” will continue to be connected with the team in a special way. During a ceremony Friday at the Northwell Health Ice Center, the Islanders formally named one of the facility’s two ice surfaces — the one on which the players practice every day — the Bill Torrey Rink.

“It’s gratifying. It’s surreal,” his son Rich said, his voice carrying emotion, as he stood near the end boards along with his three brothers and their families. “I honestly am speechless.”

The same could not be said for the more than 20 Islanders alumni who were at the function. They were buzzing with stories about the man whom they respected, feared and loved.

“Because of him, I was an Islander,” said David Volek, who flew all the way in from his home in Prague, Czech Republic. He recalled how, at the 1984 Canada Cup, Torrey asked him if he was interested in defecting from what was then Czechoslovakia. “From that moment, he put the idea in my head. He fought for me.”

Dave Lewis showed up as a sign of gratitude for what Torrey did for him. “Besides trading me before winning four Stanley Cups,” the former defenseman said, referring to the legendary deal that sent him (with Billy Harris) to the Kings for Butch Goring.

No hard feelings. “It was a great experience for me for those 7 1⁄2 years, whatever it was. With Al and Bill and the trainers, everybody was involved, and all they wanted to do was win,” Lewis said, acknowledging that the lessons he learned on Long Island helped him to win Cups as an assistant coach with the Red Wings.

John Tonelli’s departure from the Islanders, in a trade to Calgary for Rich Kromm and Steve Konroyd 33 years ago this Monday, was not a happy one. Again, no hard feelings.

“Oh my God, without Bill, we wouldn’t have had the guidance and leadership. He was the guy at the top and he had to piece it all together,” the former All-Star winger said. “The decision he made with me was a decision he felt in his heart he had to make for the future of the team. On the other hand, I had a different opinion, but the boss always wins. But I would never give up all the years of playing for the Islanders . . . I’m watching the team now and I’m so proud of the way they’re playing.”

Stefan Persson remembered having told Torrey he was going to retire in 1986 and quickly being traded to Winnipeg. Persson declined to report, and Torrey later paid him for the rest of the season. Clark Gillies remembered being “a softie” in negotiations with Torrey, a hard bargainer.

Ken Morrow recalled being in awe the first time he met Torrey and added, “I believe the organization kind of took on his personality. He was tough but fair. He was the consummate general manager in that he managed people. He got the best people he could find. He brought them in and let them do their jobs.”

Current general manager Lou Lamoriello said of Torrey, “Without question, he was the best at what he did.”

Torrey went on to have success in building the Florida Panthers. “To me, I don’t think he ever recovered from leaving here, I really don’t. I just wish he could see this,” Rich Torrey said. “But you know what? A little piece of him will be here forever.”