Cal Clutterbuck of the New York Islanders and Tom Wilson of the Washington Capitals battle along the boards during the third period in Game 3 of the Eastern Conference First Round at Scotiabank Arena on August 16, 2020 in Toronto. Credit: Getty Images/Elsa

The Islanders may have escaped another injury to their identity-setting fourth line.

The Islanders lead the best-of-seven, first-round series, 3-1, but Clutterbuck exited Tuesday night’s 3-2 loss as Capitals defenseman Radko Gudas upended him with a low check at 15:25 of the second period.

The Islanders did not practice on Wednesday. 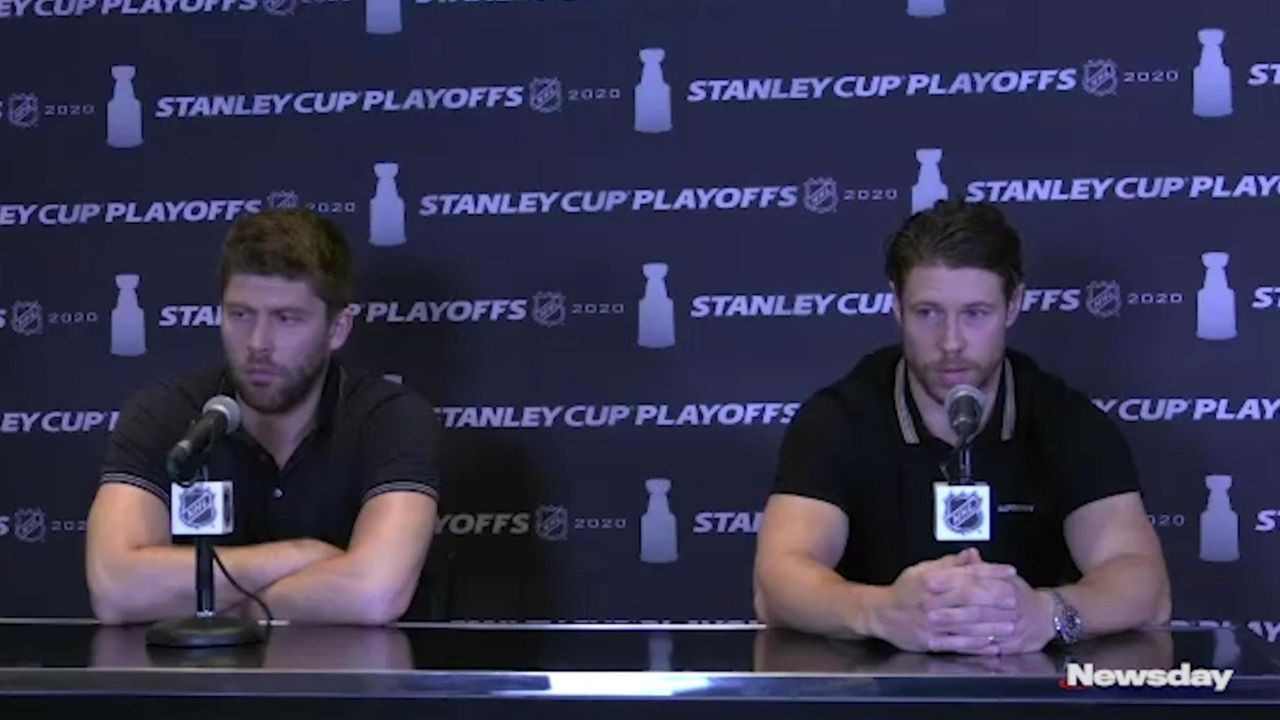 Isles stay confident heading to Game 5 vs. Caps After taking a 3-0 series lead, the Islanders dropped Game 4 to the Washington Capitals, but they remain confident going into Thursday's Game 5.  Credit: NHL

“Pretty well everybody is available,” Trotz said. “With Cal, I talked to him. He seems pretty good to go. I don’t see any issue right now.”

The fourth line was intact for only 19 of 68 regular-season games as both Clutterbuck (30 games) and center Casey Cizikas (13 games) missed extensive time after being lacerated by skate blades.

“We want to be on the ice together,” said left wing Matt Martin, who missed nine games early in the season with a leg injury. “Hopefully, he’s all right.”

Host Andrew Gross is joined by Neil Best and Colin Stephenson to talk about the Islanders' 3-0 start to their playoff series against the Capitals.

Trotz grew up just outside of Winnipeg and was coaching locally in Manitoba when Hall of Famer Dale Hawerchuk, who passed away Tuesday at age 57 because of stomach cancer, was starring for the original Jets.

“I know how revered Dale is in the Winnipeg community,” Trotz said. “He was a low-maintenance superstar. He never wanted a lot of attention. He may have been a way better player than he gets credit for.”

Isles stay confident heading to Game 5 vs. CapsAfter taking a 3-0 series lead, the Islanders dropped Game 4 to the Washington Capitals, but ... Podcast: Isles-Caps talk with Neil Best, Colin StephensonHost Andrew Gross is joined by Neil Best and Colin Stephenson to talk about the Islanders' 3-0 start to their playoff series against the Capitals.