Ilya Sorokin warms up before the men's ice hockey gold-medal game against Germany at the PyeongChang Winter Olympics at Gangneung Hockey Centre on Feb. 25, 2018 in Gangneung, South Korea. Credit: Getty Images/Harry How

At long last, the Islanders’ top goalie prospect is a member of the organization.

Ilya Sorokin’s U.S.-based agent, Dan Milstein, announced via his Twitter account on Monday night that his client has signed for the remainder of the 2019-20 season.

It’s a one-year, entry-level deal and Sorokin is expected to join the Islanders’ training camp, which opened on Monday. This season will count toward the deal even though Sorokin is ineligible to participate in games, meaning he can negotiate a more lucrative deal as a restricted free agent this offseason.

Sorokin, who will turn 25 in August, was chosen in the third round of the draft by the Islanders in 2014. 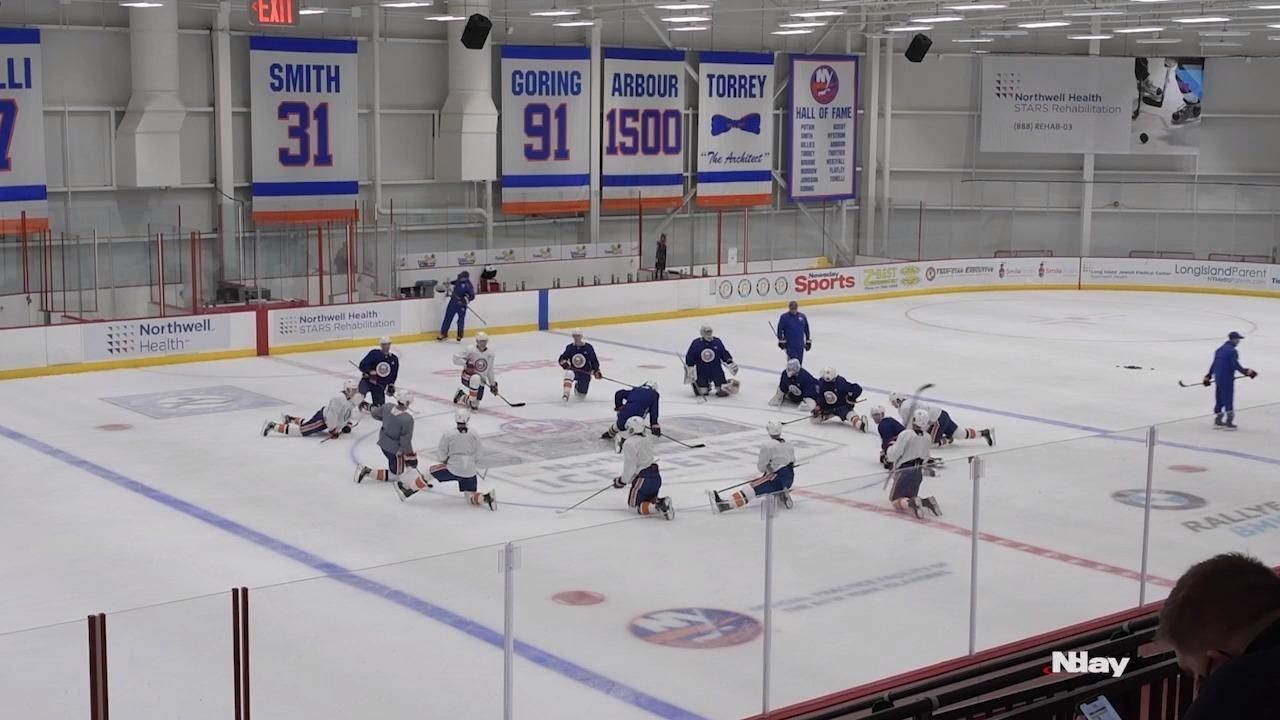 Isles Camp Day 2: Ilya Sorokin signs, and how Trotz made the lines Newsday Islanders beat reporter Andrew Gross talks about the team's second day back on the ice, the structure of the lines being used and the signing on Russian goalie Ilya Sorokin on Tuesday, July 14, 2020. Credit: Kathleen Malone-Van Dyke

In ratifying the return-to-play format and collective bargaining agreement extension, the NHL and NHL Players’ Association agreed that unsigned draft picks could agree to entry-level deals but could not participate in the resumption of games despite having the season burned off their pact.

In the past, unsigned draft picks were eligible to play as soon as a contract was signed.

There’s no doubt that the Islanders are thinking long term with Sorokin, envisioning him as part of a goalie tandem with fellow Russian Semyon Varlamov, who is completing the first season a four-year, $20 million deal.

Varlamov, asked about Sorokin shortly after signing with the Islanders, called him the best goalie not playing in the NHL.

Sorokin indicated he was ready to come to North America after his KHL contract expired on April 30. But while Islanders president and general manager Lou Lamoriello talked with Milstein, no deal was reached as both sides likely waited to find out whether Sorokin would be eligible to play this season.

The 2020-21 NHL season is expected to be delayed to Dec. 1 — it’s unclear when the AHL will start — so it’s likely Sorokin will wait an extended period to play in his next game.

However, being able to participate in training camp and possibly being brought with the team to Toronto as part of the 31 players the Islanders are allowed in their hub city will give Sorokin plenty of time to work with Islanders director of goaltending Mitch Korn and goalie coach Piero Greco.

Sorokin spent the last five full seasons with CSKA Moscow and was named the KHL’s playoff MVP in 2019 as he backstopped his team to the Gagarin Cup championship. He compiled a 26-10-3 record with a 1.50 goals-against average and a .935 save percentage this past season.