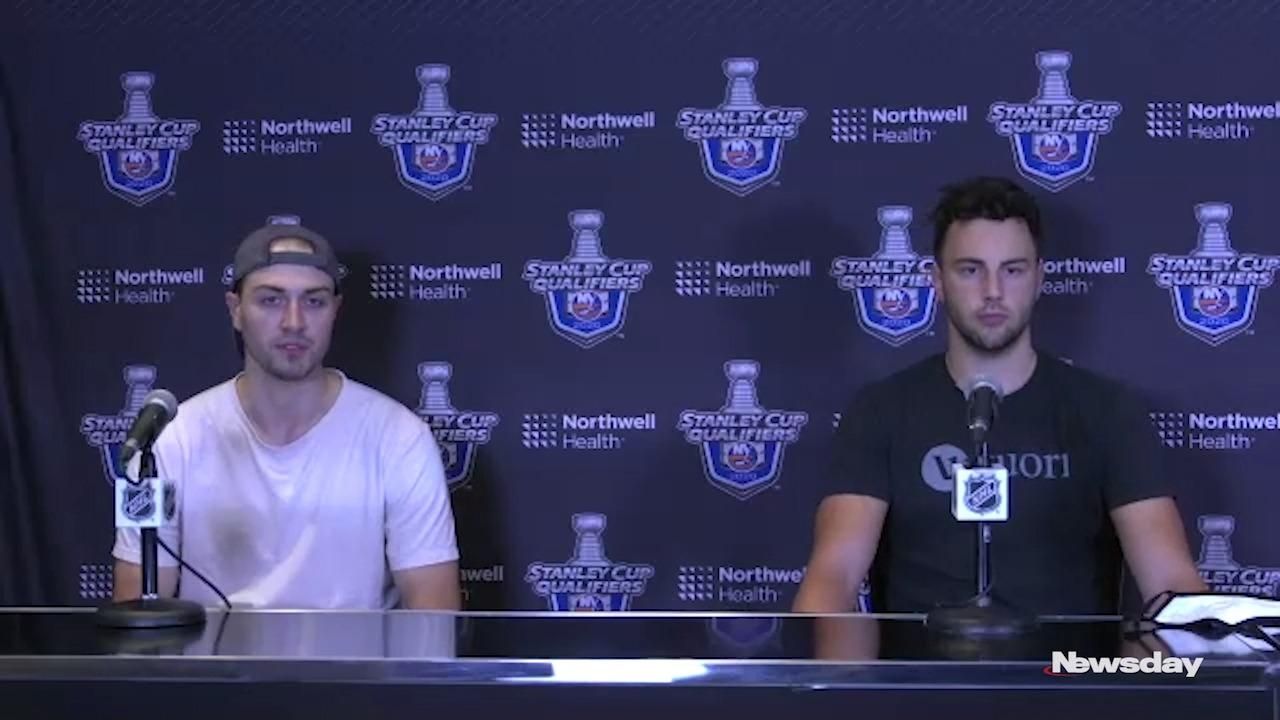 But the lack of fans took a little getting used to for the Isles' Adam Pelech, who returned to the ice on July 29, 2020, for his first game since injuring his Achilles in January. Credit: NHL

Adam Pelech took for granted his season was over when he ruptured his Achilles’ tendon on Jan. 2. Of course, he had no idea the NHL would have to pause play because of the COVID-19 pandemic a little more than two months later.

“I think once the season was officially delayed on March 12, that was kind of the point where we kind of realized, along with the training staff, there was a chance that I could potentially play, depending on how this plays out,” Pelech said from Toronto on Thursday, less than 24 hours after getting into a game for the first time since his injury.

Pelech, shaking off some acknowledged early-game jitters, logged a seamless 15:22 as he was reunited with top-pair partner Ryan Pulock in the Islanders’ 2-1 exhibition game win over the Rangers on Wednesday night at Scotiabank Arena.

“It’s obviously been a while,” Pelech said. “It’s been almost seven months since I played. Definitely a bit of jitters going into the game. But, once you’re out there, especially with the way our team plays — everybody is so predictable — it made the game really easy for me. I’m glad that’s how it went and I’m looking to build on that.”

The Islanders did not practice on Thursday. They open their best-of-five qualifying series against the Florida Panthers on Saturday afternoon.

“I’m really happy that I’m able to play in the playoffs with my team,” Pelech said. “I didn’t think that was a possibility. So, I’m really glad for the opportunity and really looking forward to getting started on Saturday.”

Pelech was still in a walking boot when the NHL shut down on March 12, watching helplessly as the Islanders struggled without him in the lineup. They limped into the pause on an 0-3-4 slide and had gone 2-7-4 after fourth-line center Casey Cizikas — who also returned to game action on Wednesday night — suffered a left leg laceration on Feb. 11.

The Islanders jumped from allowing 2.6 goals per game with Pelech in the lineup to an average of 3.1 goals in the 30 games (10-13-7) after he was injured.

The Islanders, under coach Barry Trotz, rely on their defensive structure as opposed to trying to overwhelm opponents offensively. Pelech’s healthy return is a huge boost to the Islanders’ ability to play the style and at the pace they want.

The pandemic scattered team members and, for the most part, kept many players off the ice until the NHL re-opened for voluntary, small-group workouts on June 8. However, injured players such as Pelech were allowed to rehab and skate at their team’s facility during the pause.

In addition to reuniting him with Pulock, Trotz put Pelech back into his penalty-killing role. He was on the ice for 1:52 of shorthanded time as the Islanders killed off all three of the Rangers’ power plays.

“Adam is a guy I didn’t know much about when I arrived on the Island,” Trotz said on Thursday on Sportsnet’s Hockey Central, a daily radio show in Canada. “He’s got a really good hockey IQ, a great stick and he reads the game well. Every team needs that player that can erase your mistakes. A lot of times, it’s your goaltender. He’s been a solid, top player for us when it comes to key situations.”

Podcast: Isles-Panthers preview with Gross, Goring and GoldsteinHost Andrew Gross is joined by Isles analyst Butch Goring and Fox Sports Florida's Steve Goldstein to preview the Islanders vs. Panthers qualifying series. Isles' Adam Pelech comfortable in returnBut the lack of fans took a little getting used to for the Isles' Adam ...

Lennon: Yankees have to be buyers, and this win backed that up
Yankees stun Red Sox by scoring four two-out runs in eighth
Lamoriello happy with cap space, but needs to replace lost players
Sanchez seems to be improving, could play Sunday
Meet the Rangers' 2021 draft picks
Mets notes: McNeil misses another game; Hill to start Sunday
Didn’t find what you were looking for?