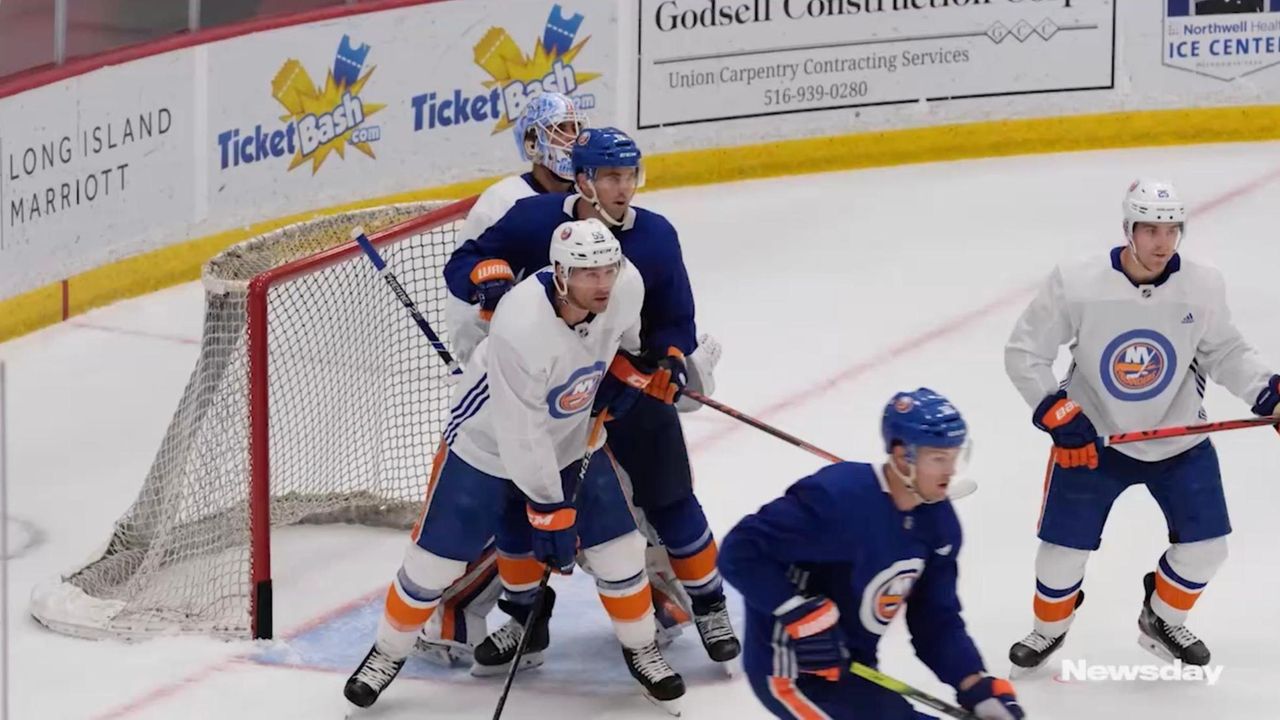 Newsday Islanders beat reporter Andrew Gross talks about the team's third day of training camp, who was on the ice and who wasn't on Wednesday, July 15, 2020.  Credit: Craig Ruttle

Training camp scrimmages are just that, a far cry from real NHL competition.

Yet, under these unique circumstances of the league return-to-play plan, Islanders coach Barry Trotz must put more  emphasis on evaluating the intrasquad scrimmages as he preps his team for a best-of-five qualifying series against the Panthers beginning on Aug. 1 in Toronto. His team has just a lone exhibition game against the Rangers on July 29 before the elimination games start.

“I was impressed,” Trotz said Wednesday after the Islanders’ first scrimmage since training camp opened on Monday at Northwell Health Ice Center in East Meadow. “We tried to implement a few things. They were able to execute at a real good pace. We’ve got to shoot the puck a little bit more. That’s what I learned.”

Group 1 defeated Group 2, 2-0, on goals from Tom Kuhnhackl and Mathew Barzal and a shutout effort from goalie Semyon Varlamov as the teams played two 15-minute periods without power plays.

Andrew Gross shares his observations from the restart of Islanders training camp, plus the signing of Ilya Sorokin and Andrew's Answers.

Trotz said special teams work will soon be incorporated into camp, though the team has its first off day on Thursday.

“I think everybody had similar opportunities to skate and get ready,” said defenseman Nick Leddy, back on the ice on Wednesday after missing the first two days of training camp for an undisclosed reason. “What I saw after today was that everybody put in the time and effort. We’re all working now to become that unit again and get back on the ice again.

“I felt good today,” Leddy added. “I think the conditioning was there. Overall, systems-wise, it’s kind of connecting with everyone again. It will take a couple of skates. Our system is so detailed I think it will come back pretty quick.”

For the most part, Trotz’ lines and defense pairings have a familiar look, especially with defenseman Adam Pelech and fourth-line center Casey Cizikas back healthy after lengthy absences before the season was paused on March 12 because of the COVID-19 pandemic.

“I was really happy with Adam,” Trotz said. “That was really his first scrimmage for almost six months now. He did really well.”

The Islanders were on an 0-3-4 slide as the season was paused and had lost 11 of 13 with Cizikas out of the lineup. Their goals-against average jumped from 2.6 to 3.1 after Pelech was injured on Jan. 2.

Leddy said none of that matters now.

“At this point, you’ve got to start with a clean slate,” Leddy said. “Once you touch the ice for the first time against Florida, you’ve just got to start fresh and focus on the present.”

Trotz also singled out rookie defenseman Noah Dobson and Thomas Hickey, a longtime stalwart among the Islanders defense corps who spent almost all of this season with the organization’s AHL affiliate in Bridgeport, has having strong scrimmages.

Kuhnhackl, battling several forwards for playing time, including linemates Ross Johnston and Andrew Ladd, scored a short-side goal on Thomas Greiss as he muscled to the net. Trotz also had a chance evaluate the rookie line of Otto Koivula in between Kieffer Bellows and Oliver Wahlstrom.

Trotz said the younger players will have to prove themselves in the scrimmages, but likely “a tie will go to the veteran.”

And he’s not likely to hold any veterans out of the lone exhibition game to further evaluate a player on the lineup bubble.

“I think you’ve got to go pedal to the metal,” Trotz said. “That’s my mindset. Go with the guys that got you here and let them have the best experience to feel what it’s going to be in the hub city and go from there.”