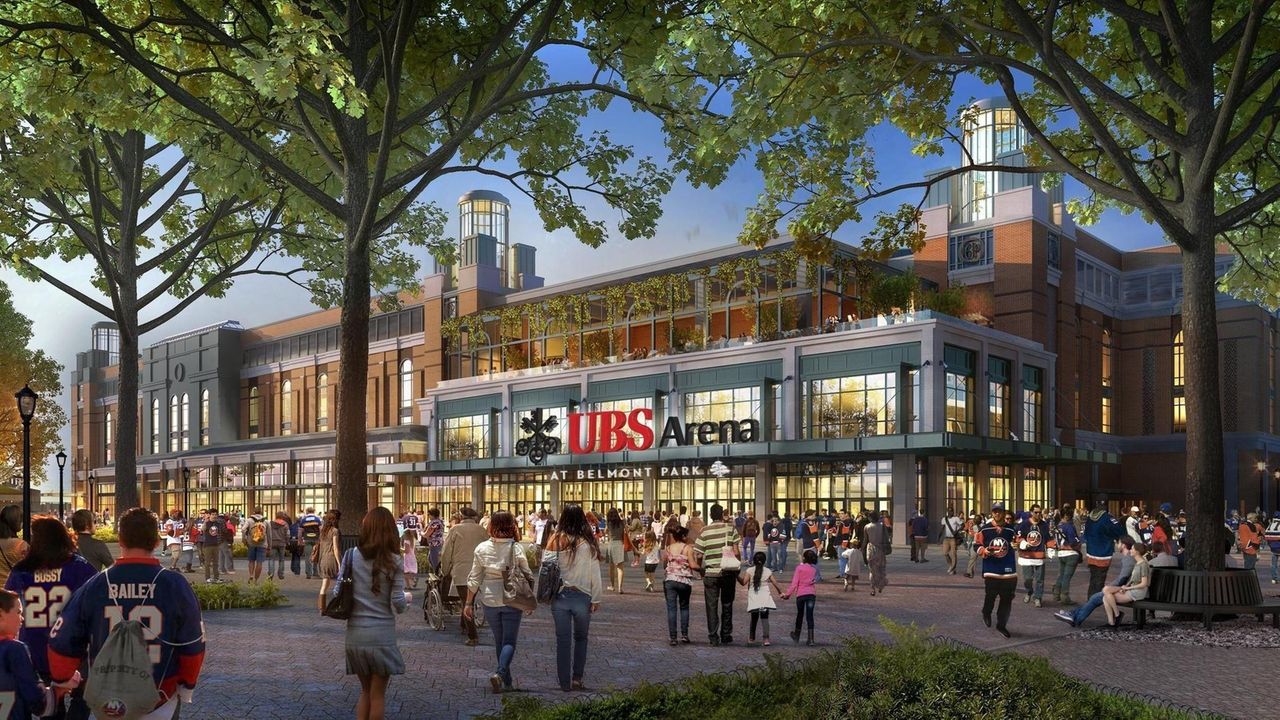 The Islanders' new home will be called UBS Arena.

In announcing the naming rights agreement Wednesday, Islanders co-owner Jon Ledecky and Oak View Group Chief Executive Officer Tim Leiweke said UBS, a Switzerland-based bank, wanted to "send a strong message about their commitment to the future of this city, the metropolitan area and the economy" amid the coronavirus pandemic.

UBS, which describes itself as "a global firm providing financial services in over 50 countries," has a 20-year agreement for the arena naming rights. Team executives declined to say how much the deal was worth.

"They're based in New York, their American headquarters are here, and they have thousands of employees here," Leiweke said.

We are excited to announce an exclusive 20-year arena naming rights agreement for the future home of the @NYIslanders. @UBSArena at Belmont Park in Elmont, NY is projected to open for the 2021-22 @NHL season. Full details here: pic.twitter.com/PmZMPBOPYi
#shareUBS https://t.co/AeTejexroa

The Islanders' naming rights deal represents "one more tangible step toward the opening of the arena … as we finally get a new home that Islanders fans richly deserve," Ledecky said.

The Islanders' Belmont Park arena, now under construction, is targeted to open in October or November of 2021, Leiweke said. He insisted it will be ready for whenever the NHL's 2021-22 season begins.

"We like to call this arena 'the next most famous arena for the next century,'" Leiweke said in a nod to Madison Square Garden in Manhattan.

He predicted it would be "the last great arena that will be built in all of our lifetimes" in the New York City area.

The arena is the centerpiece of a $1.3 billion development at Belmont Park that includes a 250-room hotel and 350,000 square feet of retail on 43 acres adjacent to the racetrack.

New York State, which owns the land at Belmont, agreed to allow the group to capitalize financially on the naming rights of the arena as long as the name was not offensive and did not include firearms or tobacco products, according to NYAP's lease.

Leiweke said the pandemic's impact "100 percent affected these conversations" about finding a naming rights partner for the Islanders' Belmont arena.

In a virtual news conference Wednesday, Tom Naratil, president of UBS Americas, said the New York metropolitan market is important for the bank. About a third of its employees — some 23,000 people — are based in the U.S. division of the international firm.

"We are looking forward to excellence," Naratil said.

Ledecky said more than a third of the suites have been sold at Belmont, and that the Islanders had embarked Wednesday on a season-ticket deposit campaign for seats at UBS Arena.

The opening of UBS Arena will mark the Islanders' full-time return to Long Island, after they played exclusively at Nassau Coliseum from 1972 through 2015. They played at Barclays from 2015 until 2018 and since then have split their home games between both arenas.

The Islanders are hoping to play their final season at the county-owned Coliseum if Nassau can find a new operating company after the previous operator, Russian billionaire Mikhail Prokhorov's Onexim Sports and Entertainment, said it was giving up control.

Leiweke confirmed Newsday's earlier report that Oak View Group was "interested" in operating the Coliseum. The county is working with Onexim and its lenders to remove the company from the Coliseum lease.

Isles expect Belmont arena will be topped off by end of summerThe team still believes the facility will be complete for the 2021-22 season despite a delay brought on by the coronavirus pandemic. See the progress on Isles' UBS Arena at Belmont Park constructionA look at the latest from the construction site of the Islanders' future arena at Belmont Park. Listen to Island Ice, Newsday's Islanders podcast

2:22
Why Yanks may be turning corner with sweep of Jays
Mets waste Marcus Stroman's gem, fall to Cubs
Isles lose a defensive battle in Game 3, Lightning take 2-1 series lead
0:39
Isles fans tailgating outside Coliseum before Game 3
Best: This deficit seems a bit more daunting for Isles
Just your standard 1-3-6-2-5-6 triple play for the Yankees
Didn’t find what you were looking for?