Anthony Beauvillier of the Islanders, left, celebrates his goal at 11:55 of the third period against the Capitals and is joined by Mathew Barzal in Game 1 of the Eastern Conference First Round during the 2020 NHL Stanley Cup Playoffs at Scotiabank Arena on Wednesday in Toronto. Credit: Getty Images/Elsa

The Islanders were clearly the stronger team five-on-five in Game 1 of their first-round playoff series. The problem was, they kept gifting the Capitals power-play opportunities.

“We took too many penalties,” said captain Anders Lee, who played a key role in the Islanders’ eventual rally with both his first goal and point of the postseason and a hard first-period hit that injured No. 1 center Nicklas Backstrom and incensed the Capitals. “We’ve got to keep our composure. It’s going to be a physical series.”

The Islanders survived their self-inflicted problems to score four straight goals, including three in the third period, in a 4-2 victory on Wednesday at Scotiabank Arena in Toronto. Josh Bailey scored the shorthanded winner.

The Capitals went 2-for-7 on the power play but Alex Ovechkin was held without a point. The Islanders went 0-for-4 in the feisty playoff opener.

“Our team is smart enough to know to look at the other side,” said Islanders coach Barry Trotz, who led the Capitals to the Stanley Cup in 2018 before switching sides two weeks later. “They’ve got maybe the greatest goal scorer who’s ever played the game. We don’t want to be on the penalty kill if we can help it. We’ll play five-on-five with anybody in the league.”

“It’s nice to be up 1-0, especially when we were down 2-0,” said Islanders No. 1 center Mathew Barzal, who had two assists, including setting up Jordan Eberle’s wrister that floated past Braden Holtby’s glove to start the comeback at 18:57 of the second period. “Shout out to the penalty killers. They did a heck of a job. It’s a good feeling but there’s a long way to go.”

Holtby made 23 saves while Semyon Varlamov stopped 24 shots for the Islanders. The Capitals were held to 12 shots while playing five-on-five.

“I thought we just stuck to it,” said Bailey, who also set up Anthony Beauvillier’s clincher at 11:55 of the third period. “They’ve got a really good team. We just wanted to keep working. That’s playoff hockey.” 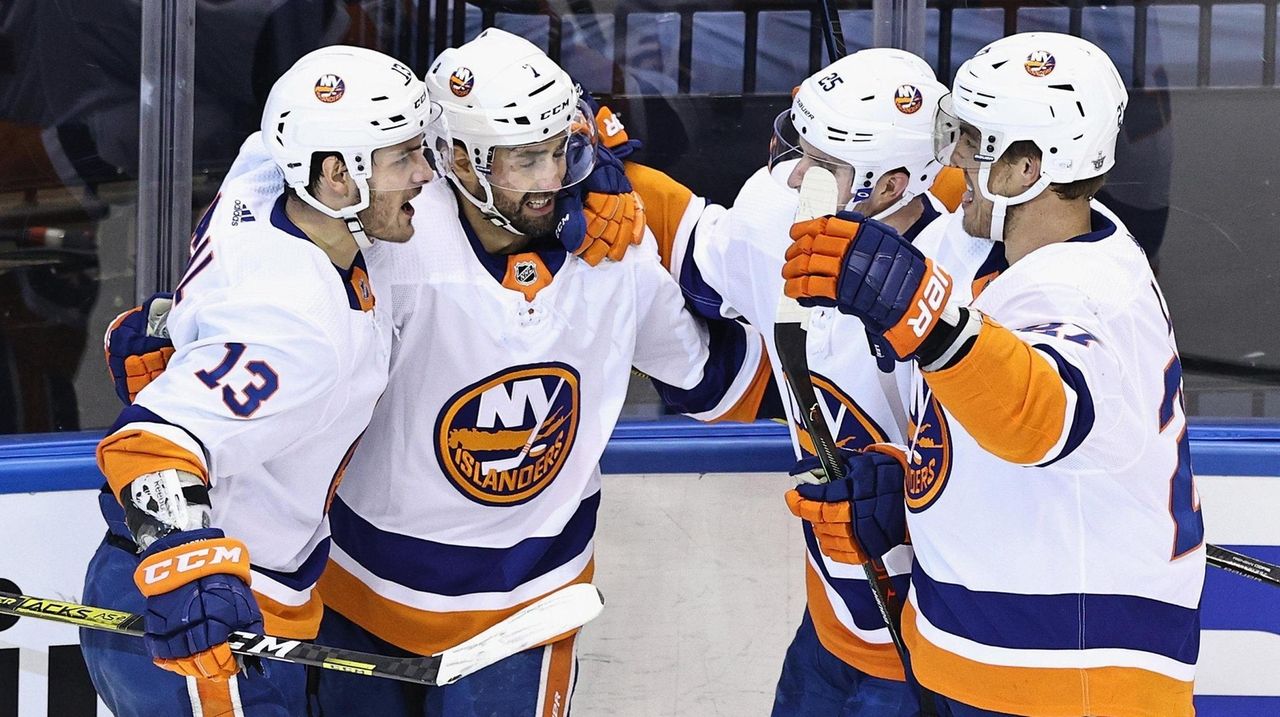 Leo Komarov’s high stick on Ilya Kovalchuk put the Capitals on their seventh power play at 5:51 of the third period but, this time it worked to the Islanders advantage.

Brock Nelson retrieved the puck in the right corner after Holtby misplayed his flip in and fed Bailey in the slot for a 3-2 lead at 6:52 of the third period.

“I didn’t want it to go on Holtby,” Nelson said. “But he ended up playing it. I just wanted to put a little bit of pressure on a loose puck.”

The Capitals converted two of their three second-period power-plays, with T.J. Oshie getting each goal.

He collected the puck for an open look from the left after a fortuitous bounce off the backboards to give the Capitals a 1-0 lead at 5:27 with Matt Martin in the penalty box for interference on Carl Hagelin. It was an unfortunate turn for the Islanders as Holtby denied both Martin and Casey Cizikas in tight just before Martin’s penalty.

Oshie then pushed the puck through Varlamov’s pads for a 2-0 lead at 11:18 with Eberle off for a hooking call on Oshie that negated an Islanders’ power play.

Oshie, on the goal line, also denied Jean-Gabriel Pageau’s shorthanded try at 16:55 of the second period after the puck got past Holtby.

But the momentum started by Eberle’s goal carried continued as Lee muscled to the net to pound in a loose puck, tying the game at 2-2 just 51 seconds into the third period.

“Honestly, we knew how the game was going,” Lee said. “We felt good. We were generating chances. Going into the third, it was the same mentality.”

It didn’t take long for the physical play to start as the teams eschewed the typical Game 1 feeling-out period. They combined for 26 penalty minutes in the first period, including five roughing penalties and Lee fighting Tom Wilson at 17:13.

The Capitals’ burly top-six forward confronted Lee for flattening Backstrom with a blue-line shoulder check at 2:37, which led to Lee and defenseman John Carlson, who returned to the Capitals’ lineup after missing all three round-robin games, each receiving roughing minors.

Islanders players discuss Game 1 win over CapitalsJosh Bailey, Anders Lee and Mathew Barzal spoke about the Islanders' 4-2. come-from-behind win over ... Game 1 photos: Islanders vs. CapitalsThe Islanders play the Capitals in Game 1 of the Eastern Conference first-round playoff series ... Isles' Lee steps up with a big hit, a big fight and a big goalThe Islanders captain put a big hit on the Caps' Niklas Backstrom, got pummeled by Tom Wilson and scored the tying goal in the third period.  Bailey pleases Trotz with his production in playoffsBailey scored the winner shorthanded and added an assist in Isles' Game 1 win. Trotz said: "He's got a quiet compete level I've come to appreciate."

Jones passes concussion protocol, will play Sunday for Giants
Rangers' Ryan Strome in COVID-19 protocol
Coughlin says current Giants need to 'hang in there'
Robinson back on the court for Knicks' preseason finale
Fox set up for a huge contract extension
Islanders bent on correcting sloppy mistakes of opening loss
Didn’t find what you were looking for?