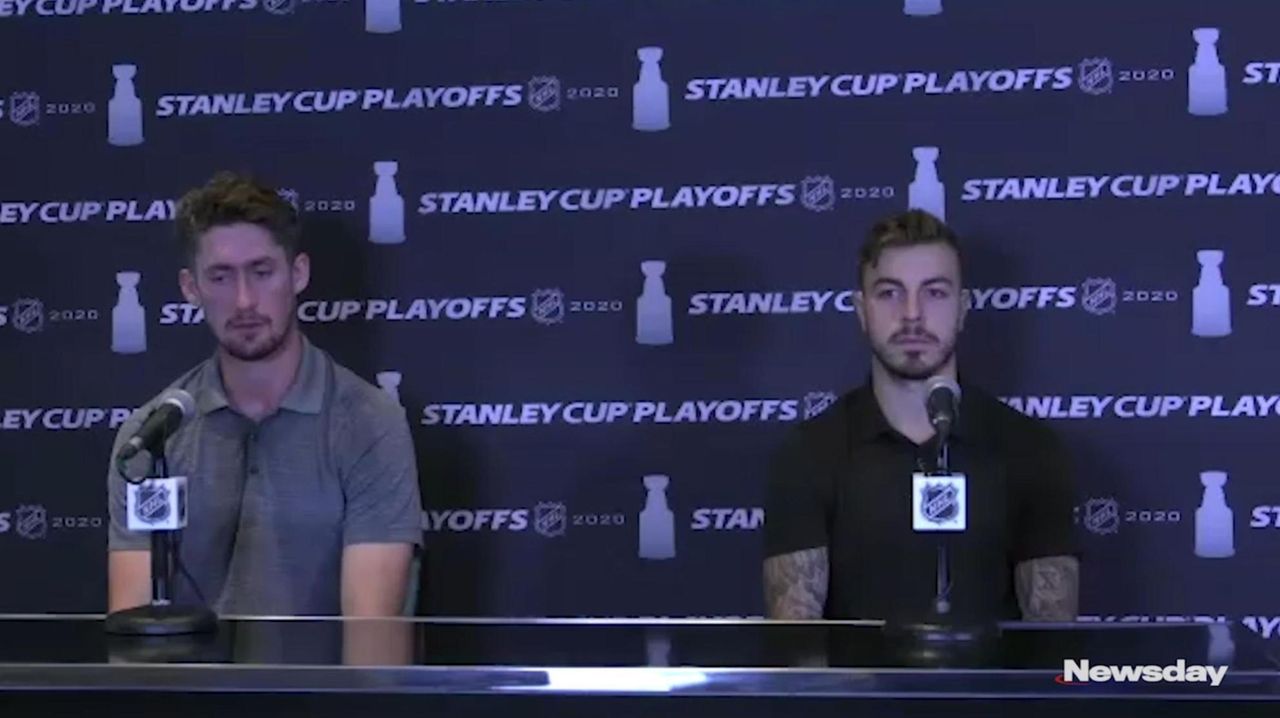 The Islanders lead the Capitals, 3-0, in their first-round Stanley Cup playoffs series and can advance to the conference semifinals with a victory against the Washington Capitals on Tuesday.  Credit: NHL Productions

They can sweep their first-round series with a win in Tuesday night’s Game 4 at Scotiabank Arena in Toronto. But the Islanders understand how crucial it will be to stifle any potential confidence by Washington in a comeback attempt.

“Trying to close out a team and end their season is one of the toughest things,” Islanders center Brock Nelson said on Monday. “We put ourselves in a good spot. But our work isn’t done yet.”

It’s the same spot the Islanders found themselves in last season’s first round against the Penguins, who, like the Capitals this season, were two years removed from a Stanley Cup championship. The Islanders spotted the Pens a goal just 35 seconds into Game 4 at Pittsburgh. But Jordan Eberle tied it less than two minutes later and Nelson scored the winner late in the first period of a 3-1 victory.

Host Andrew Gross is joined by Neil Best and Colin Stephenson to talk about the Islanders' 3-0 start to their playoff series against the Capitals.

In franchise history, the Islanders have completed a sweep seven of the 10 times they’ve won the first three games of a best-of-seven series. Only four teams in NHL history, including the Islanders in 1975 against the Penguins, have rallied from a 3-0 series deficit.

“It’s about creating the belief and having the belief,” Capitals coach Todd Reirden said. “As a teammate, having that belief in the guy next to you. As an overall group, knowing everybody is all in to get that next win. That’s the key for us, to have that belief that it can be done.”

The Islanders played their best first period of the series in Sunday’s 2-1 overtime win in Game 3, scoring the opening goal for the first time. It put the Metropolitan Division champions on the brink of elimination in the first round for the second straight year since winning the Cup under now-Islanders coach Barry Trotz in 2018.

“It’s a tough loss to swallow,” Capitals center Lars Eller said. “I think we played our best game in the series so far. We still feel we have more to give.

“We know how good our team is from earlier in the season. We haven’t seen that qualify of play to the full extent [in this series].”

The Islanders have been much stronger five-on-five in this series and Washington has scored three of its five goals in the series on the power play (on 11 man-advantage chances). Alex Ovechkin had two goals in the Islanders’ 5-2 win in Game 2 and an assist on Sunday. But he was held to one shot in Game 3.

Overall, the Capitals have not been given much space to work in the offensive zone and their rebound chances have been minimal.

“That’s part of our game, for sure,” defenseman Ryan Pulock said. “We try to take as much time and space away. When you’re a skilled player, that’s kind of what you thrive on, is having some time, having that space. It definitely can get frustrating.”

Eller said the key for Washington will be to keep from thinking about needing four wins.

“It’s a steep mountain to climb,” he said. “That’s the challenge, to boil it down to what’s right in front of you and only think of that. You can get tired thinking about the other stuff.”

The Capitals’ task of focusing on the smaller picture is fundamentally simple. So is the Islanders’ priority of another strong start to try and discourage the opponent.

“Raising our game, trying to own the momentum of the play,” Nelson said. “I think that’s the biggest thing. If they come at you and get that belief, we want to try and take that away.”

Island Ice Ep. 44: Isles-Caps talk with Neil Best, Colin Stephenson Host Andrew Gross is joined by Neil Best and Colin Stephenson to talk about the Islanders' 3-0 start to their playoff series against the Capitals.

Isles have a plan for their new, packed schedule
Rangers vs. Toronto Maple Leafs highlights
Edwards making most of opportunity with Nets
Rangers rally with five unanswered goals to beat Maple Leafs
Aldridge steps up in final minutes as Nets hold off Wizards
Stony Brook men and women post basketball wins
Didn’t find what you were looking for?