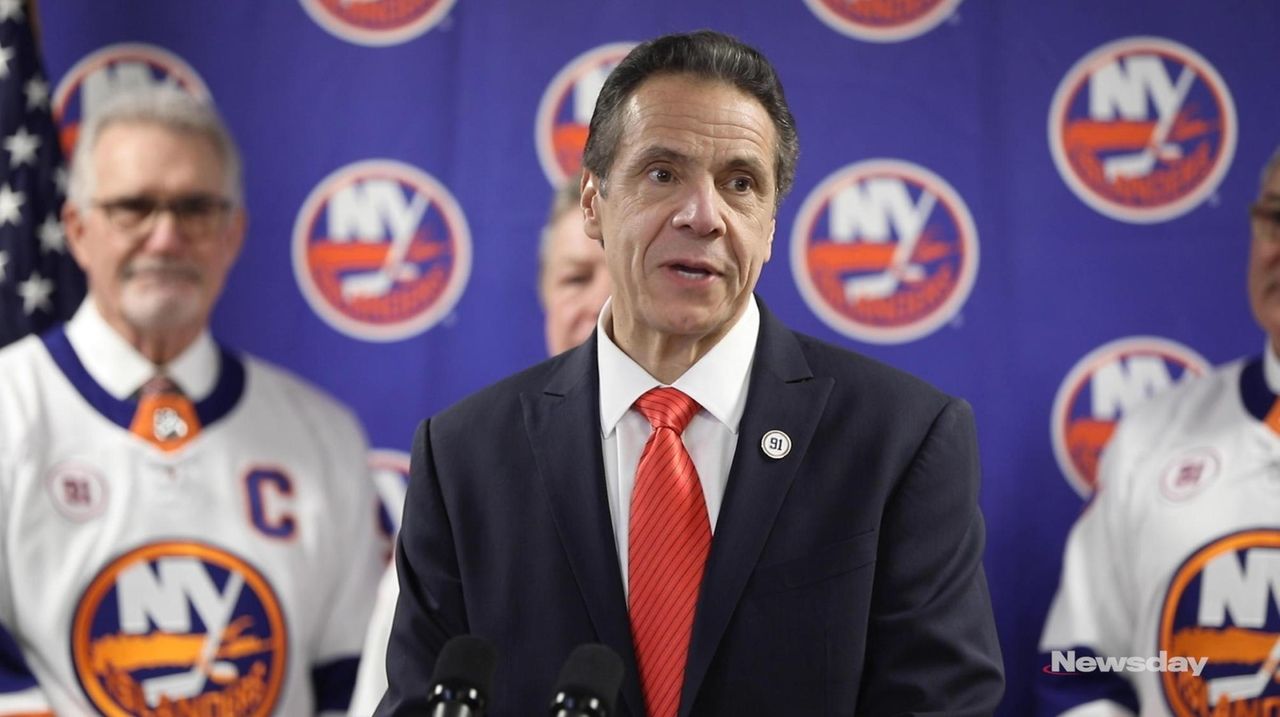 Gov. Andrew M. Cuomo announced before the game Saturday that the Islanders will play any playoff games this year and next year, along with their entire home schedule for the 2020-21 season, at the Coliseum. Credit: Newsday / Shelby Knowles

“This was about giving the fans the experience they wanted, because the attendance here is materially greater than it is in Brooklyn, and for the players, to really give them the opportunity to focus on a routine that will enhance their game experience,” Bettman said at the Coliseum before the Islanders’ game against the Boston Bruins.

Bettman’s approval of a proposal that Cuomo and Nassau County Executive Laura Curran had lobbied for brings the Islanders back to Long Island full-time five years after they left the old, pre-renovated Coliseum for Barclays Center in Brooklyn.

“Getting the Islanders back and getting them back early is really a boost in the arm for all of Long Island,” Cuomo said.

Brian Martin, 44, of North Merrick, said he’s “excited” about the Islanders’ full-time return to the Coliseum.

“They’re a Long Island team,” he said as he walked toward his seat with his son Jack, 10, before the game. “They’ve been here forever. Brooklyn was a weird fit.”

Martin, a season-ticket holder, hated the “horrendous ride” to Brooklyn for games at Barclays.

“I live five minutes from here,” he said.

Mike Puhi lives in Manhattan but said he much prefers making the long trip to Uniondale rather than going to games in Brooklyn.

“In Brooklyn, it seems like it’s all business people all the time,” said Puhi, 30, who grew up in Ridgewood, Queens. “Here, it’s by the fans, for the fans and with the fans.”

In addition, Puhi said, crowds are more raucous at the Coliseum.

“We play better here,” he said.

The announcement means the team’s last game at Barclays will be on March 22 against the Carolina Hurricanes.

Bettman said some Islanders players had talked with him about playing all of their games at the Coliseum rather than splitting the home schedule.

“I know it had to be difficult on them, and challenging, to be playing some games in Brooklyn and some games here,” he said. “Even getting to Brooklyn, since they all live on Long Island, made game day even more challenging.”

The Islanders are scheduled to move into the 17,113-seat Belmont Park arena currently under construction in October 2021.

Cuomo negotiated a deal that allowed the team to play part of this season and last season at the Coliseum after a 2018 renovation costing nearly $10 million — paid for by the state and the Islanders — that brought the arena up to NHL standards.

Bettman said Saturday that those renovations were critical. Even so, in January Bettman said he had concerns that playoff games in particular at the 13,900-seat Coliseum would be problematic because of the low seating capacity and the facilities available.

He said that some temporary media, food and restroom improvements might be made if the Islanders go deep into the playoffs.

Knicks lose as Pacers romp through their defense
Not much help for Harden as Nets fall in Houston
Trouba says hit on Chicago's Khaira not malicious
Rangers' win streak ends at 7 in loss to Avalanche
Stony Brook men's hoops rides second-half surge to down Hofstra
Several Giants and Chargers receivers in doubt
Didn’t find what you were looking for?