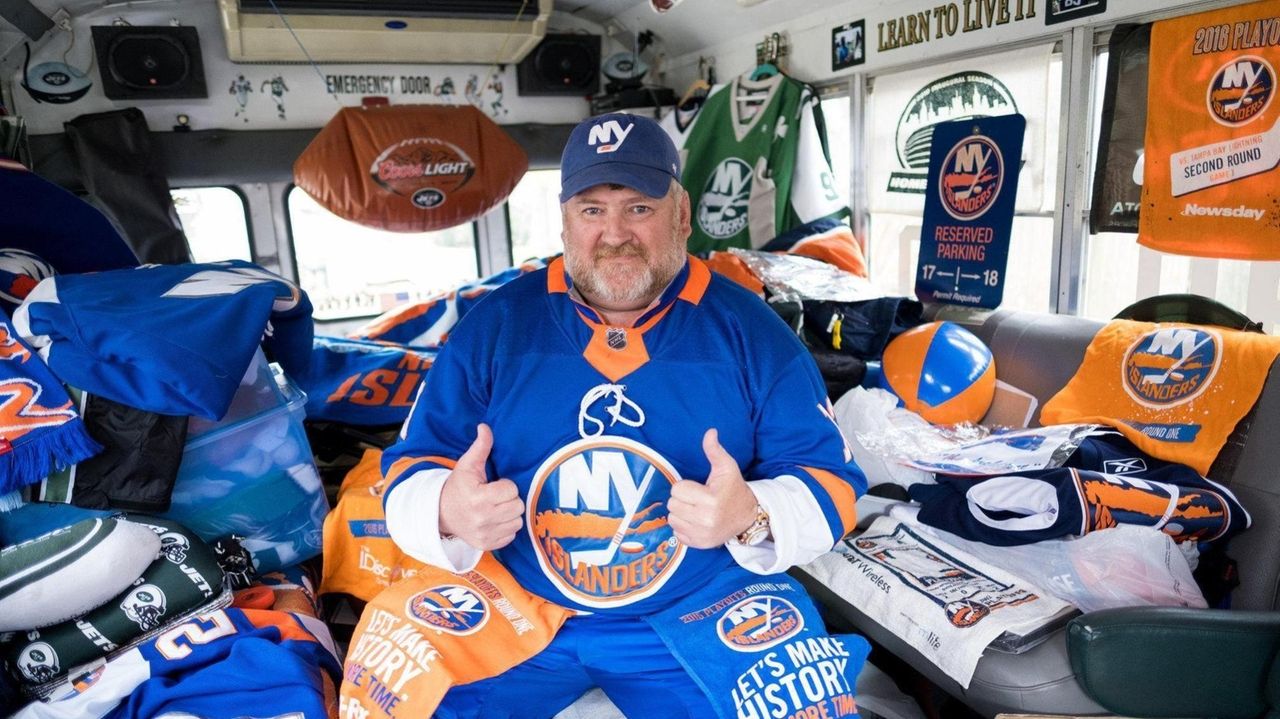 Alex Klein is a season-ticket holder for the Jets and Islanders who owns a Jets-themed school bus that he converted into an Islanders bus in time for the playoffs. He showed off his bus, which is stuffed with years' of memorabilia, outside his Roslyn home on Tuesday. Credit: Barry Sloan

Nearly 14,000 rabid New York Islanders fans, who have waited faithfully since 1988 to open a playoff series at home — through indignities too numerous to count — are ready to rock the Old Barn Wednesday night in Uniondale against the Pittsburgh Penguins.

While the puck doesn't drop at NYCB Live's Nassau Coliseum until 7:30 p.m., Alex Klein of Roslyn Heights and five college friends plan to pack into his converted school bus, outfitted with unmistakable Islanders logos and flags, to get to the arena by noon to tailgate.

The steak and ribs were already marinating Tuesday afternoon. The shrimp scampi and sliders were being prepared. And don't forget the blue and orange Jell-o shots.

"I hope the Coliseum personnel have tightened the bolts on the roof," said Klein, 52, who works in sales and is a part-time amateur hockey referee. "Because the roof of the Coliseum is going to literally blow off."

The pent-up enthusiasm should be no surprise. The Islanders' downtrodden, yet passionately devoted fan base has been through it all.

Decades of hockey that ranged from atrocious to mediocre. A con man owner who went to prison for fraud. A $3.8 billion renovation project rejected by the Town of Hempstead. A public referendum to build a new arena voted down by taxpayers. A move to Brooklyn that proved to be a poor fit for hockey and an uncomfortable commute for fans. And, finally, a part-time move back to their former digs on Hempstead Turnpike — an arena that's been downsized and renovated — while a new arena is planned at Belmont Park

"We're perpetually the underdogs," said Bob Corsarie, a Long Island transplant living in Naples, Florida. "Always in the shadow of the Rangers. But the Islanders fans have a sense of community."

Corsarie, 49, who works in financial services, plans to fly up Wednesday morning to attend the playoff opener with his nephew, Anthony Petrone. Corsarie's daughter, Kaitlyn, 15, will join him Friday for Game 2 at home and then it's off to Game 3 in Pittsburgh.

And while Corsarie has been to 30 of 31 NHL arenas — he's yet to make it to Ottawa — he said the playoff atmosphere at the Coliseum is unique.

"There's nothing like it anywhere," he said. "You can feel every moment."

Most hockey analysts agree this wasn't supposed to be the Islanders' year. Their best player, center John Tavares, bolted for a big money contract in Toronto while the team brought on a new coach, general manager and goalie.

"We were supposed to be rebuilding," said Nicholas Persaud of Roslyn, an Islanders superfan who earned an online following creating viral videos of the team. "No one expected us to be here."

The Islanders last played playoff hockey at the Coliseum during the 2014-15 season when they lost in the first round to the Washington Capitals. The following season they made it to the second round.

But that was in Brooklyn. In an arena built for basketball with no legacy of the team's four consecutive Stanley Cups. And as fans are quick to point out: no place to tailgate.

The Coliseum, while maligned for its cramped corridors, lack of public transportation and scant luxury boxes, is different. From the sea of fans clad in blue and orange jerseys grilling in the parking lot before games to the piercing noise inside the arena reverberating off the ceiling, creating a giant echo chamber, the Coliseum is a special place for playoff hockey, fans say.

"It's going to be deafening," said Tom Ballantyne, 27, of Levittown, co-founder of the Blue and Orange Army, a group of fans from Section 329 known for its decibel-bursting enthusiasm. "We are going to do everything we can to give the Islanders a home ice advantage."

"The fans love them," said Posner, who also gives out free bagels to Islanders fans at his stores. "It gets them in the spirit."

And Long Islanders aren't the only ones getting ready for the big game.

Islanders' viewing parties are occurring in as many as 16 cities, from Los Angeles to Tampa — all arranged through a Twitter page to connect out-of-town fans.

Michael Ryan, 32, who was raised in Deer Park and now lives in North Carolina, plans to watch the playoff opener with 50 fans at a bar in Charlotte.

"We are die-hards," said Ryan, who has tickets to Game 5 in Uniondale. "We stick with the team through thick and thin."

Christopher Flanagan of Putnam County, a self-professed Islanders' "fanatic," plans to pull his son, Christopher Jr., out of school early Wednesday to beat the traffic to the Coliseum. They'll play street hockey through the asphalt parking lot to get amped up for game time.

"It's so cool to be able to do this with my son," Flanagan said. "It's really special. It's going to be a great day."