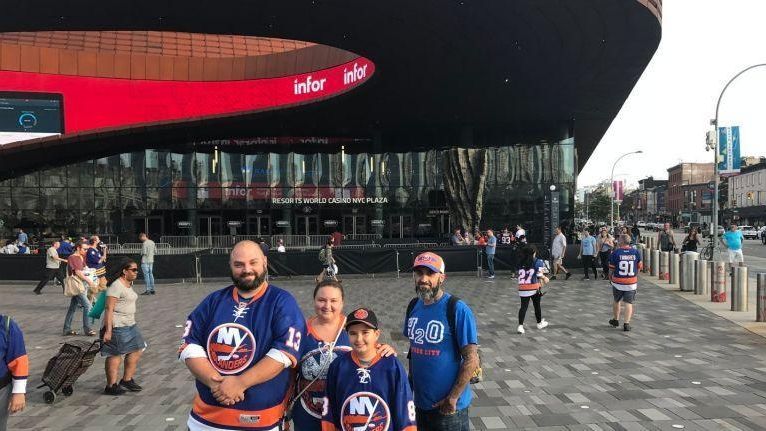 Though the Islanders began their third season at the Barclays Center Saturday night, many fans have not warmed up to the new home ice.

“It needs to come back to Long Island where it belongs,” said Michael Zatwarnicki, 39, Levittown, of the Islanders before their home opener against the Buffalo Sabres. “The seats are terrible. Our best player got hurt last year because the ice is terrible. Bring it back home.”

The sightlines were a common complaint from fans. “The lower level isn’t too bad, but the upper level? You might as well not be at the game. It’s too steep,” Ryan Wheatley, 33, of Bellmore said.

“It wasn’t designed for hockey,” said Sean Hood, 53, of Island Park, a seven-year season ticket holder. “It was designed for basketball. They need to go to Belmont, something specifically built for the Islanders.”

The Islanders are in negotiations over modifying their license agreement with the Barclays Center and submitted a proposal to build a new arena at Belmont Park, Newsday reported last month.

“I would love to see them back in the Coliseum, but I’m hopeful for the proposal in Belmont,” Peter Angione, 48, of Levittown said.

“Personally, I don’t see them getting approved for that because I don’t see the state allowing three arenas in such close proximity,” said Jim Vetter, 51, of Lindenhurst. “I’m not going to keep my hopes up . . . I don’t mind coming here, but I would much rather them be back at the Coliseum.”

A renovated Nassau Coliseum opened earlier this year and hosted an Islanders preseason game, but has 13,900 seats, roughly 3,000 fewer than it had when the Islanders played there. The Islanders averaged 13,101 fans last season, the third-lowest average attendance in the league, according to ESPN.com. The Barclays Center’s capacity for hockey games is about 15,800.

Zatwarnicki said that while he would welcome a new arena at Belmont Park — “it’s better than Seattle or Quebec” — he thinks the team returning to Nassau Coliseum would be ideal. “I’ll take a smaller arena, I don’t care,” he said, adding the decision to renovate the Coliseum with fewer seats was “shortsighted.”

“Less people are coming here than would sit in those seats (at the renovated Coliseum),” Antonio Longo, 39, of Freeport said. “You’d sell out there and have more happy fans than you would in a place with more seats no one wants to get to.” Longo added the Barclays Center is not easy to get to by train or car, a sentiment that a number of other Long Island-based fans echoed.

“I attended the preseason game at the Coliseum and there were some guys from Barclays sports tickets sales in the parking lot,” said Wheatley. “They came over and started talking to us. They wanted to know why the commute from Brooklyn to Nassau County was so horrible. I turned around and asked them ‘how do you think the fans feel?’ The real fans are in Nassau.”