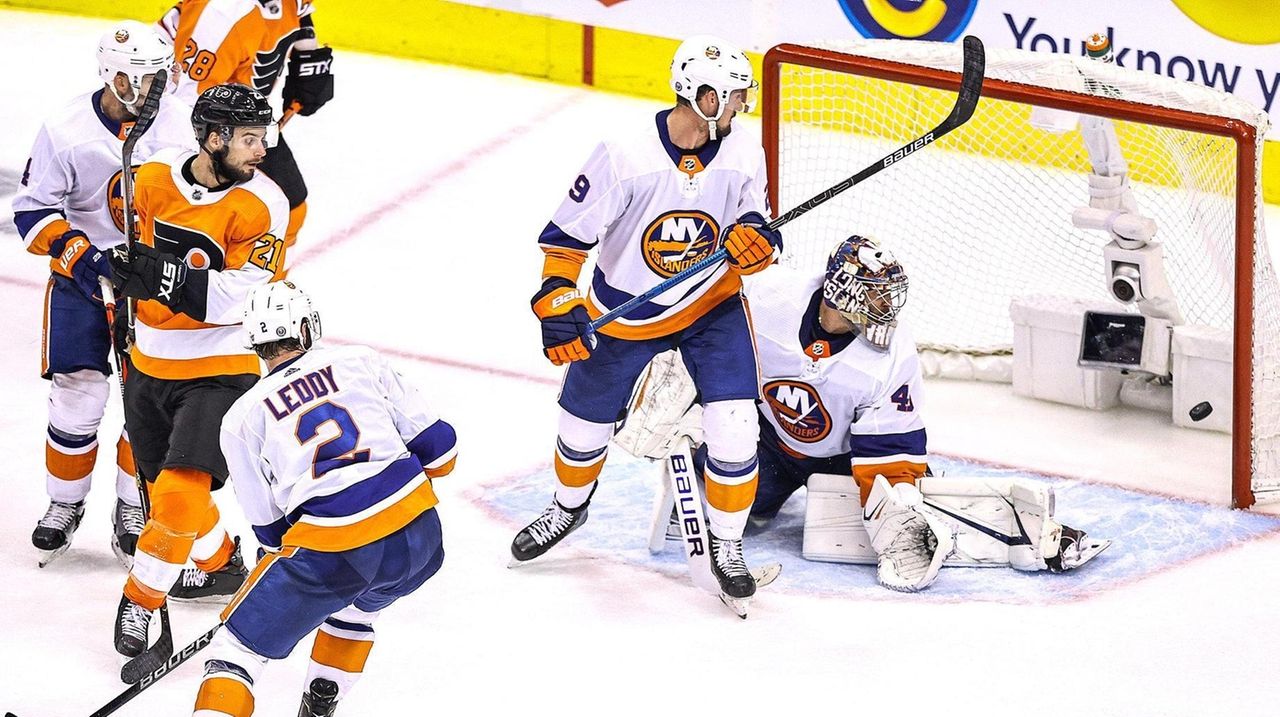 Islanders players and head coach Barry Trotz discussed the team's 4-3 overtime loss in Game 5 to the Flyers and their desire to turn the page and look ahead to the next game. Credit: Newsday

The Islanders, looking to advance to a conference finals for the first time since 1993, finally found their desperation mode.

It just wasn’t enough as the Flyers staved off elimination with a 4-3 overtime win in Game 5 of their second-round series on Tuesday night at Scotiabank Arena in Toronto.

“We didn’t come out with a great first,” said Brock Nelson, who started the Islanders’ two-goal, late third-period rally but was unable to convert on an overtime breakaway. “We started getting going as the game went on. After the last game, it’s not good enough when you’re trying to clinch a series and a team is fighting to keep going.”

Game 6 will be Thursday night. The Islanders must be concerned with whether top-line center Mathew Barzal will be available after he exited at 15:13 of the third period. He took an inadvertent high stick from Claude Giroux that drew blood near his right eye and coach Barry Trotz did not have an immediate update.

Scott Laughton deflected defenseman Ivan Provorov’s shot from the blue line past an unsuspecting Semyon Varlamov (28 saves) at 12:20 of the first extra period.

“Regardless, you turn the page,” said Josh Bailey, who had two assists, giving him 13 for the postseason. “You would have liked to have closed it out. It didn’t happen.”

But the Islanders did erase a two-goal deficit within a span of one minute, 33 seconds late in the third period to force overtime after the Flyers had built off their strong performance in a 3-2 loss in Sunday’s Game 4.

Coach Barry Trotz called that the Islanders’ “worst game” of the postseason.

Bailey set up Nelson for a hard shot over the glove of Carter Hart (29 saves) to bring the Islanders within 3-2 at 15:46 of the third period. Derick Brassard then tied it at 17:19 after yeoman work by Cal Clutterbuck, who won a battle along the wall and muscled the puck toward the crease before feeding Brassard.

The Islanders have outscored opponents 21-6 in the third period during the postseason.

“In the playoffs, you’ve just got to move on,” Brassard said. “We’re not going to look behind, just look ahead. We had some really good looks in overtime, we came back in the third. We showed character. It just didn’t go our way.”

Hart made seven saves in overtime, turning aside defenseman Devon Toews, who was open in the slot, at 1:36 before denying Nelson’s breakaway at 4:16.

But for most of regulation, the Flyers dominated puck possession, kept the Islanders’ forecheck at bay and were able to find cracks in their usually tight defensive structure.

Plus, the Flyers finally got scoring contributions from top-end players Giroux and James van Riemsdyk. But top-line center Sean Couturier exited after the second period and the Islanders were finally able to start wearing the Flyers down.

“On the side of a loss, I’m going to say we need a little more,” Trotz said. “We had some early chances in overtime, some Grade A's. If we score on them, we’re not having this conversation.”

Trotz has lost a 3-1 series lead to an Alain Vigneault-coached team before. In 2015, Vigneault’s Rangers rallied to oust Trotz’s Capitals in the second round.

The Lightning are awaiting the Islanders-Flyers’ winner in the Eastern Conference finals.

The Islanders had an early power-play opportunity in the third period – they were 1-for-4 in the game – when Laughton was called for interference just 50 seconds into the period. But the man advantage mustered nothing and defenseman Matt Niskanen extended the Flyers lead to 3-1 with an unscreened shot from the right circle at 4:32 after both defenseman Nick Leddy and Brassard failed to clear the zone.

The Islanders took a 1-0 lead on Barzal's power-play goal at 1:20 of the second period, a play that was unsuccessfully challenged by Vigneault after Barzal was pushed into Hart by Tyler Pitlick.

Giroux tied the score at 1 at 15:45 with his first goal of the postseason as he deflected down defenseman Philippe Myers’ shot from the right point. Van Riemsdyk then notched his first postseason point on an odd-man rush as the Flyers took a 2-1 lead at 18:18 of the second period.