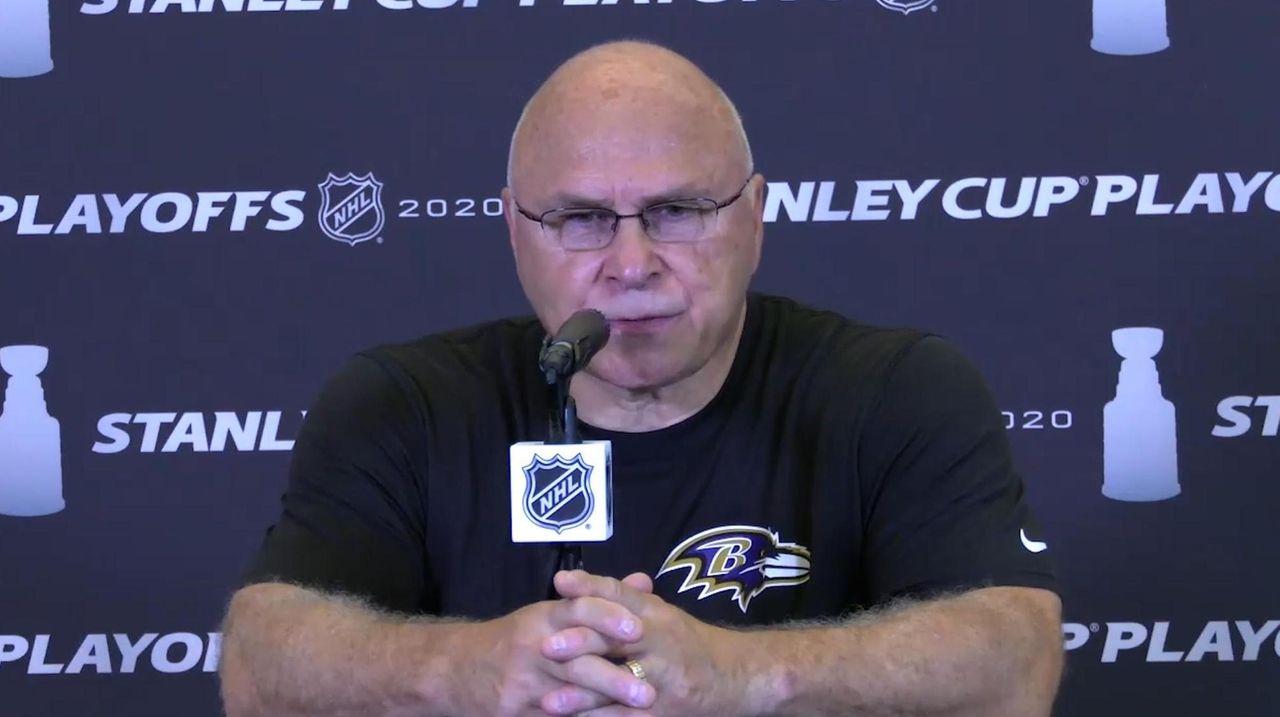 The Islanders discussed Sunday their performance so far in an unusual playoff season, as well as the importance of getting off to a good start in Sunday's Game 4 of the Eastern Conference semifinals against the Philadelphia Flyers. Credit: NHL

NHL coaches are always looking to push to the next level. That can be improvements in team play or advancing deeper into the playoffs.

Barry Trotz is, of course, striving to do that with the Islanders, even with the team halfway to advancing to its first conference final since 1993. The Islanders faced the Flyers on Sunday night in Game 4 of their second-round series at Scotiabank Arena in Toronto after taking a 2-1 series lead with Saturday night’s 3-1 win in Game 3.

The Islanders played mostly consistent hockey through their first 12 postseason games. Their defensive structure and forecheck have been able to swing momentum. The goaltending, except for Semyon Varlamov’s first-period hiccup in a 4-3 overtime loss to the Flyers in Game 2, has been consistent.

“I think the way we’re playing right now, we just have to do the same thing over and over every day,” right wing Leo Komarov said.

The first periods, though, could be better, as the Islanders were outscored 4-1 in the first three games against the Flyers.

That’s all part of Trotz’s job of pushing his team to the next level.

“To understand the consistency level and the detail level and the battle level that it needs to have success in a playoff run,” Trotz said. “Also, understand the teams are so evenly paired. You’re going to have to weather storms from the other team. You get scored on first, do you panic? You’re leading late in the game, do you panic? How do you handle those moments? That’s what I think getting to the next level is for me and our group and then hopefully understanding the process to become a team that’s considered a contender year in and year out.”

Trotz coached the Capitals ito the Stanley Cup in 2018 before joining the Islanders two weeks later. His new team eliminated his old team in five games in the first round to cost Trotz’s successor, Todd Reirden, his job.

These playoffs are unique in that they’re being played in sequestered arena/practice rink/hotel bubbles in Toronto and Edmonton because of the COVID-19 pandemic. The regular season was halted on March 12 – the Islanders had played 68 of 82 games – before play resumed with the postseason tournament on Aug. 1.

The forced pause allowed all teams to enter the postseason healthy. For instance, Islanders top-pair defenseman Adam Pelech is in the lineup after he suffered what was expected to be a season-ending Achilles’ tendon injury on Jan. 2.

“You’re seeing the parity in the league,” Trotz said.

But Trotz was unaware the Islanders’ Game 3 victory gave them two wins in the second round for the first time since 1993.

“When I came here, I said this to the whole group: ‘I had a great experience in Washington,’ ” Trotz said. “’I was able to go to the top of the mountain in this league and I really want to share that with this group.’

“You want to be an organization that can vie to be a playoff team every year and vie to be a contender every year,” Trotz added. “That’s part of the building blocks.”

The Islanders lost the 1993 Eastern Conference final to the eventual Cup-champion Canadiens and have not reached the Cup Final since 1984 after winning four straight from 1980-83.

“It’s a matter of executing better,” Vigneault said of his team. “At the same time, the Islanders are making it very hard on us. They’re a good team. They are a four-line team. A heavy team that is hard on the forecheck. They are one of the best teams we’ve played against so far this year.”

Trotz likes Komarov's character with Islanders"He's obviously a seasoned pro, but, you know, he brings people into the fight,'' the Islanders coac said. Best: Current Isles revive memories of run in 1992-93That early '90s squad was the only Islanders team to win two playoff series since 1984.