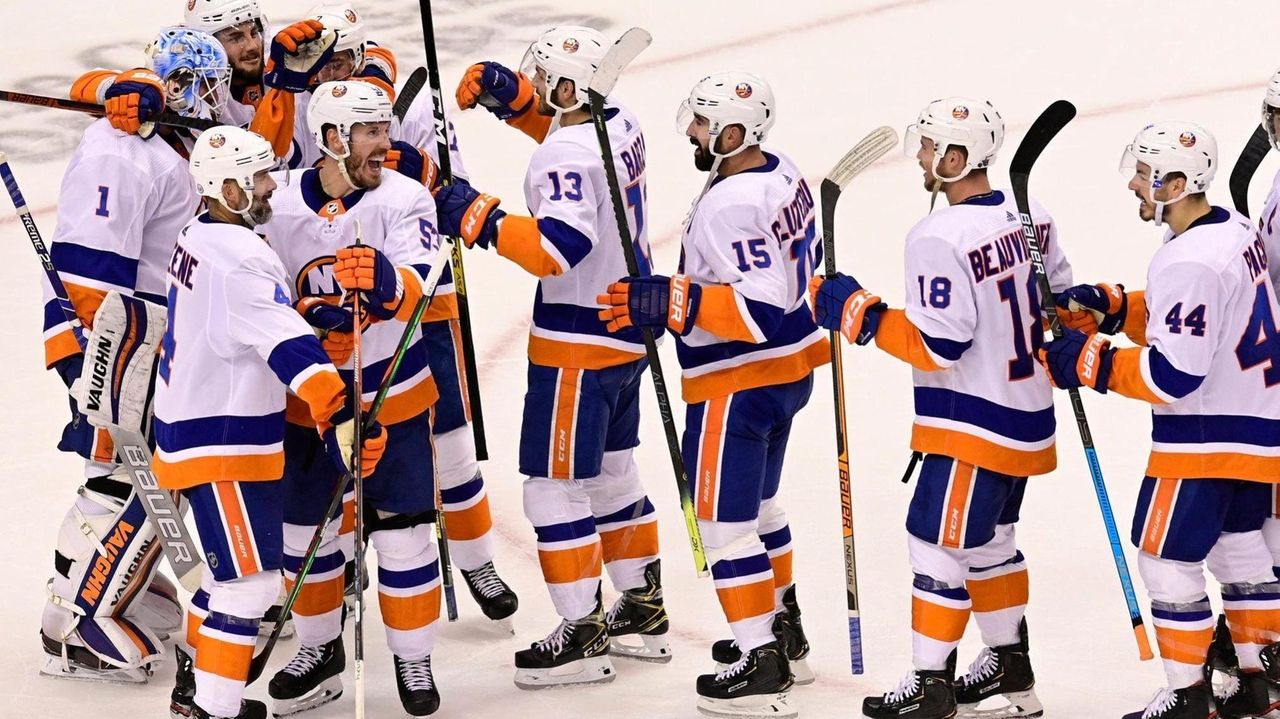 Andy Greene, Scott Mayfield, Thomas Greiss, Brock Nelson and Barry Trotz spoke about the Islanders' 4-0 win over the Philadelphia Flyers in Game 7 of their Eastern Conference Semifinal matchup and the emotion of advancing to their first conference final since 1993. Credit: NHL

This most unpredictable, streaky, interrupted season will continue for the Islanders. They are in the Eastern Conference finals for the first time since 1993 because they played with such predictability in their game at the most important time.

The Islanders defeated the Flyers, 4-0, in Game 7 of their second-round series on Saturday night at Scotiabank Arena in Toronto. They will face the Tampa Bay Lightning — Game 1 is Monday at 8 p.m. in Edmonton — with a chance to reach the Stanley Cup Final for the first time since 1984.

“It’s special,” said Brock Nelson, an Islander since 2013. “The end goal is still out there. Obviously, this is a big day and a big win for us. Guys work their whole life to get this opportunity.”

The Flyers had battled back from a 3-1 series deficit to force Game 7 with back-to-back overtime wins, including a 5-4 double-overtime victory in Thursday night’s Game 6.

But the Islanders left no doubt in earning their fourth Game 7 victory in franchise history in nine tries. They held the Flyers to 16 shots, including three in the second period, with the winning combination of defensive structure, puck-possession advantage built on winning the majority of one-on-one battles and the first career playoff shutout from goalie Thomas Greiss.

“It was an unreal game,” Greiss said. “That was the best game I ever saw the defense play, how they took stuff away.”

Coach Barry Trotz turned to Greiss, making only his second start since March 7, after he stopped 36 shots in a 3-2 win in Game 4. Semyon Varlamov made 26 saves on Thursday.

The Islanders also killed off both of the Flyers’ power-play chances as their penalty kill was 13-for-13 in the series.

“I think we know how we want to play,” defenseman Scott Mayfield said. “When we’re playing north, getting the puck in and being physical on the forecheck, not playing slow. We have our identity and we want to play that way every game. It’s hard right now, all the teams are good. But it was nice we got to it right off the bat.”

The Islanders’ last trip to the conference finals was a five-game loss to the eventual Cup champion Montreal Canadiens.

The Islanders have faced the Lightning twice in the playoffs, losing in five games in 2004 and in the second round in 2016. The Lightning bounced back in these playoffs after being swept in the first round last season as the top seed.

The Islanders took a 3-0 lead into the third period after Nelson completed a two-on-one rush off Josh Bailey’s feed at 11:26 of the second period.

Bailey added another assist on Anthony Beauvillier’s empty-net goal at 13:42 of the third period after Flyers coach Alain Vigneault pulled Carter Hart (22 saves) for an extra skater. Hart had been pulled with 13:05 to go.

Bailey’s 15 assists are the most for the franchise since Bob Bourne had 20 in 1983 when the Islanders won their fourth straight Stanley Cup.

The Islanders quickly showed there were no lingering effects from Thursday night’s disappointment, taking a 2-0 lead in a mostly one-sided first period.

Mayfield, whose broken stick in the offensive zone ultimately led to Ivan Provorov’s double-overtime winner in Game 6, made it 1-0 at 9:27 of the first period on a rising shot from the right dot that flew over Hart’s blocker and under the crossbar.

Greene, who also scored in Game 1 against the Flyers, made it 2-0 at 13:13. But it was Derick Brassard who created the goal, patiently holding the puck on the right until he spotted Greene in the opposite circle for an open look at the net.

Now it’s on to Edmonton with two more rounds between the Isles and the Cup.

“You have to celebrate the moments because those moments don’t come by very much,” Trotz said. “We understand we’re halfway. By winning an extra round [the best-of-five qualifying series against the Panthers], it seems like the journey is a little longer for us. We’ve won three playoff rounds and we’re going to play a real good Tampa team.”

Best: Isles fans can party like it's 1993They still need eight more victories to hoist the Stanley Cup, but save those thoughts for Monday night, when the Islanders face the Lightining in Game 1 of the conference finals. Greiss gets first career playoff shutout in Game 7Greiss' only other start in these playoffs was in Game 4 against the Flyers when made 36 saves. He made 16 in Game 7 Saturday night. Game 7 photos: Islanders vs. FlyersThe Islanders defeated the Philadelphia Flyers, 4-0, in a deciding Game 7 in the Eastern ... Isles must be flexible to keep up with schedule"I think we're getting used to whatever you throw at us, we'll deal with it," coach Barry Trotz said.

Georgiev helps Rangers win their sixth straight
Leddy on Islanders' struggles: They'll figure things out
Make that 10 losses in a row for Isles as they fall to Red Wings in OT
Nets fall to Bulls, find Chicago again tougher in 4th quarter
SBU takes step back in loss to Wagner
Shesterkin placed on IR, out minimum of three games
Didn’t find what you were looking for?