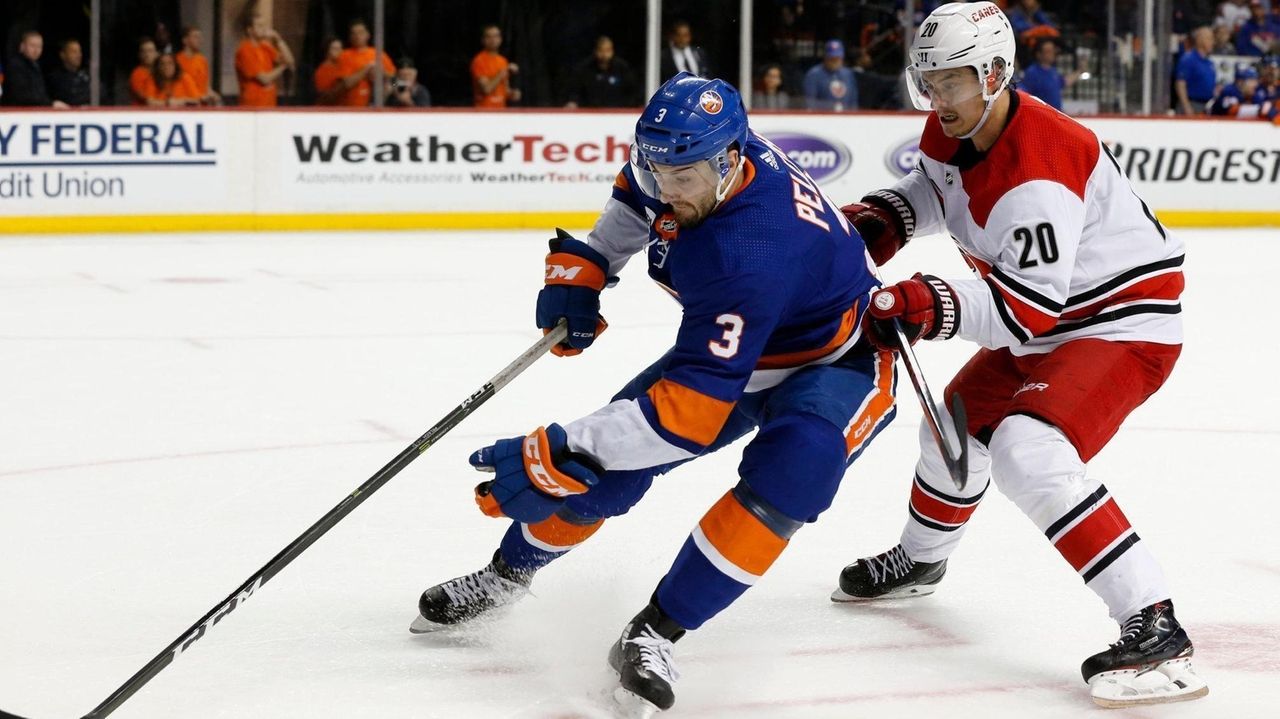 The Islanders leave Brooklyn down two games in this second-round series with the Hurricanes after falling 2-1 in Game 2 of the Eastern Conference semifinals on Sunday afternoon at Barclays Center. Coach Barry Trotz and some of his players discussed the defeat and remaining games ahead. Credit: Newsday / Shelby Knowles; Photo Credit: Newsday / J. Conrad Williams Jr.; Jim McIsaac

In the end, all of the Islanders’ close calls, the shots off the crossbar and post, the disallowed goal, didn’t matter. Neither did the parade of injuries suffered by the Hurricanes, who lost defenseman Trevor van Riemsdyk on the first shift, No. 1 goalie Petr Mrazek in the second period and right wing Saku Maenalanen in the third.

The reality is the Islanders are headed to Carolina trailing 2-0 in their second-round series after the Hurricanes rallied with two goals in the first 1:05 of the third period for a 2-1 win in Sunday afternoon’s Game 2 at Barclays Center.

He did not mean that as sour grapes but as an acknowledgment that after two one-goal losses, the Islanders very much feel as if they’re still in this series.

“This isn’t the position we wanted to be in,” said left wing Josh Bailey, who hit the post on a third-period power-play chance. “It’s two one-goal games that could’ve gone either way.

“They’ve got a good team, no question about it,” Bailey added. “Both goalies played really well. They play very structured, similar to us. You can’t let the frustration take over. I think we’ve found a way to frustrate teams throughout the season and the playoffs. We’re going to have to find a way to frustrate them and take it to them a little bit.”

Robin Lehner made 16 saves for the Islanders. Curtis McElhinney relieved Mrazek at 6:27 of the second period and stopped all 17 shots he faced.

Mrazek, who was forced out of the game with a lower-body injury, slammed his stick as he left for the locker room and appeared in discomfort after stopping defenseman Ryan Pulock’s hard shot earlier in the period.

But rookie Warren Foegele beat Lehner over his right shoulder from the right faceoff circle to tie the score 17 seconds into the third period and former Islander Nino Niederreiter made it 2-1 by deflecting Teuvo Teravainen’s shot from the left point at 1:05.

“Other than that, they didn’t have a whole lot for the game,” Trotz said. “I think we played a pretty complete game.”

“I think we’ve got to realize that every moment counts,” Pulock said. “I guess, right out of the gate [in the third period], maybe we weren’t that sharp. They had momentum and they got another. We just have to be ready a little better than that. But for the most part, I liked our game.”

The Islanders ended the second period with defenseman Devon Toews’ apparent goal with 13.2 seconds left being waved off because of a kicking motion, even though he was below the goal line.

“It was the right call,” Trotz said.

The Islanders pressed the attack the rest of the third period after falling behind. Jordan Eberle hit the crossbar from low in the slot at 12:28. Pulock also hit the crossbar at 18:58 with Lehner off for an extra skater, and Anders Lee’s backhand on the rebound went off the outside of the post.

“It’s tough,” Lee said of the Hurricanes’ two quick goals. “It put us down the rest of the third, but we had opportunities. That’s got to be tied up at the end on my end.”

“We were just millimeters away,” Pulock said. “There’s a lot of hockey left here.”

Mathew Barzal put the Islanders ahead 1-0 at 13:17 of the first period with his first career playoff goal after he had five assists in the four-game sweep of the Penguins in the first round. Barzal, playing off the left post, tried to thread a pass through the crease and the puck deflected past Mrazek off the stick of Hurricanes defenseman Jaccob Slavin.

Mrazek faced 10 shots before being forced from the game.

The Hurricanes, already without forwards Andrei Svechnikov, Jordan Martinook and Micheal Ferland, lost van Riemsdyk to an apparent left shoulder injury off a hard check by Cal Clutterbuck. Maenalanen played two shifts in the third period before leaving with an upper-body injury.

Hurricanes coach Rod Brind’Amour said his team “gutted it out.” So far, they are winning the war of attrition.

“I don’t think there’s any frustration,” Toews said. “We thought we played a better game than Friday. It just didn’t work out for us. It’s a long series.”

Trotz on Isles' disallowed goal: 'It was the right call'Devon Toews tried to get the puck to his stick from his skate, and the ... McElhinney stellar in net replacing injured MrazekAfter managing only one goal against Carolina Hurricanes goalie Petr Mrazek in the first 90 ... Herrmann: Lehner knows series is far from overThe theme for Robin Lehner's season, which was a key part of the Islanders' season, ... Martin knew McElhinney would be a tough cookieWhen Hurricanes goaltender Petr Mrazek left midway through Sunday's game at Barclays Center, most Islanders ...