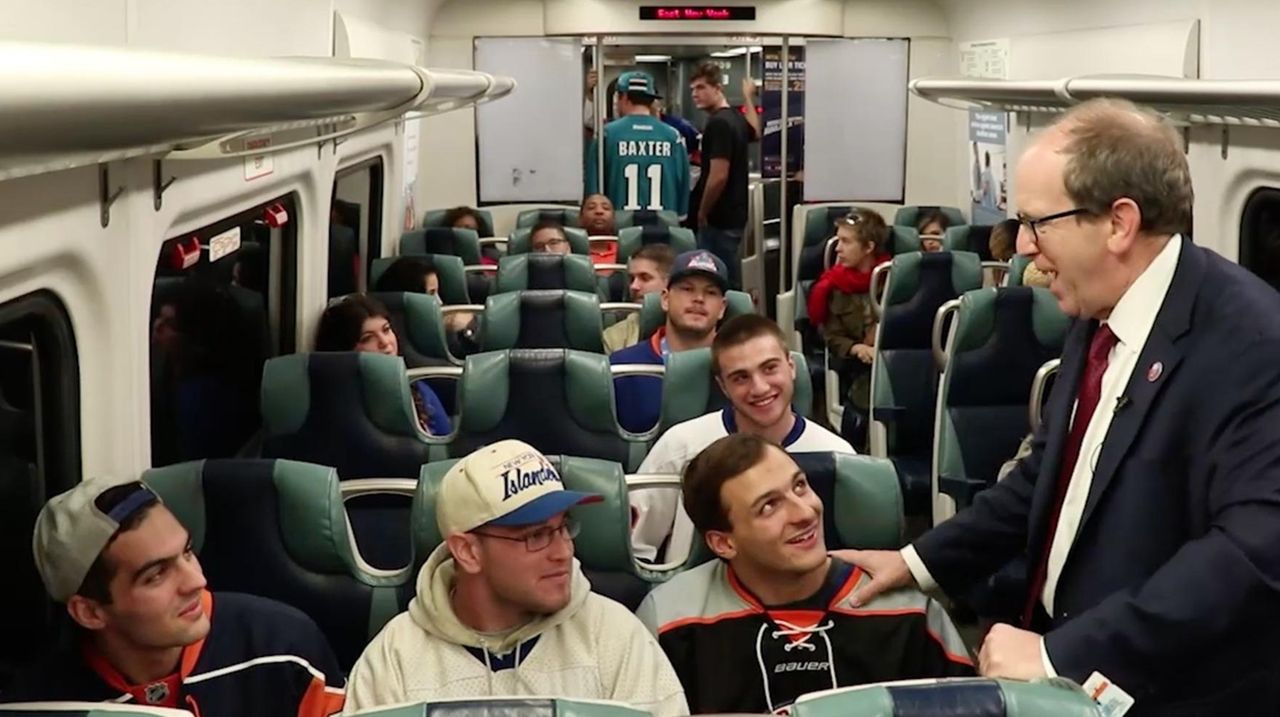 Islanders co-owner Jonathan Ledecky revealed to Newsday the proposed site for a new arena at Belmont Park and said making the Long Island Rail Road station there a full-time stop is "a critical piece" of the plan. Credit: Jessica Rotkiewicz

Islanders co-owner Jonathan Ledecky revealed to Newsday the proposed site for a new arena at Belmont Park and said making the Long Island Rail Road station there a full-time stop is “a critical piece” of the plan.

The arena would be located next to the existing, part-time LIRR station in what is now a parking lot outside the grandstand area of the racetrack, Ledecky said.

The new arena would host approximately 150 events per year, including Islanders games and entertainment such as concerts, family shows and college basketball games, according to Peter Luukko of Oak View Group, one of the Islanders’ partners in the development.

Ledecky called the LIRR station at Belmont “a strategically located asset to serve the metropolitan area” to come to Islanders games. He also said there would be 7,000 parking spots available, allowing fans to drive and tailgate as they used to at Nassau Coliseum, where they played until leaving for Brooklyn in 2015.

A full-time LIRR stop at Belmont would be necessary to meet the number of people who would be coming regularly to the arena, Luukko said. Currently, the Belmont LIRR station is used only when horse racing is taking place.

Ledecky and Luukko spoke to Newsday Saturday night while riding the LIRR from Garden City to Barclays Center in Brooklyn for the Islanders game. Luukko said the Belmont arena would be managed by the Oak View Group — an alliance of 27 arenas, including Madison Square Garden, Chicago’s United Center and the Los Angeles Forum, designed to increase bookings and sponsorships.

The group submitted its plan to the Empire State Development on Sept. 28.

“Our fingers are crossed on the [proposal],” Ledecky said. “We want to be selected, and we’re out here explaining to the fans to try to be patient as we try to get this across the line.”

Ledecky said he isn’t concerned about the LIRR’s ability to accommodate such a plan, saying it has been amenable to adding extra trains after games at Barclays Center in response to the crush of people leaving Islanders games at the same time. He also noted how ridership increases on game nights.

The Islanders’ other partners on the arena project are Sterling Project Development, controlled by the Wilpon family, who own the Mets. Ledecky credited their experience in building Citi Field. ESD has given no timeline for a decision.

Increasing the viability of the Belmont LIRR station has been a hot topic in the months leading up to the ESD request for proposals process.

State Sens. Todd Kaminsky (D-Long Beach) and Elaine Phillips (R-Flower Hill) said in a letter to ESD Commissioner Howard Zemsky in April that any development at Belmont should include a full-time LIRR station. Hempstead Town Supervisor Anthony Santino also held a news conference that month calling on the governor’s office and MTA to expand the station.

And dozens of Nassau residents called for a full-time LIRR station while speaking before ESD officials at an event about the Belmont RFP at the Elmont Public Library in July.

LIRR and MTA officials have said as recently as last spring there were no plans to add full service to Belmont.

The Belmont station received a $5 million face-lift two years ago to modernize the station and reduce the long wait times thousands of riders experienced after the 2014 Belmont Stakes. That year a record 36,000 people tried to board at once, resulting in delays up to 3 ½ hours.

The upgrades included new elevated train platforms, reconfigured tracks to accommodate 10-car trains instead of eight along with new stairs, ramps, lights and public address system. Before those improvements, Belmont was the only remaining station with ground-level platforms that weren’t wheelchair accessible.

Ledecky lives in Manhattan but said he regularly rides the LIRR to Barclays Center after spending the day at the team’s practice facility in East Meadow.

“As I talk to the fans on the train, I’m getting a lot of positive feedback from fans on getting to the games,” Ledecky said. “They just want to be closer.”

Some fans on the train asked about returning to the Coliseum. Ledecky said, “It’s not set up with the things you need to generate the revenue that you need to compete for the Cup.” He also noted that the Coliseum is not close to a LIRR stop.

For Long Islanders who have lamented the team’s move to Brooklyn because of travel logistics, he sees Belmont as a welcome compromise, both for traveling by train and car.

“We are a New York metropolitan-area team with deep roots on Long Island and we would be moving the team, if you think about the Coliseum, it’s 11 miles away from the Coliseum,” Ledecky said. “That’s a different journey than the journey from Barclays Center.”