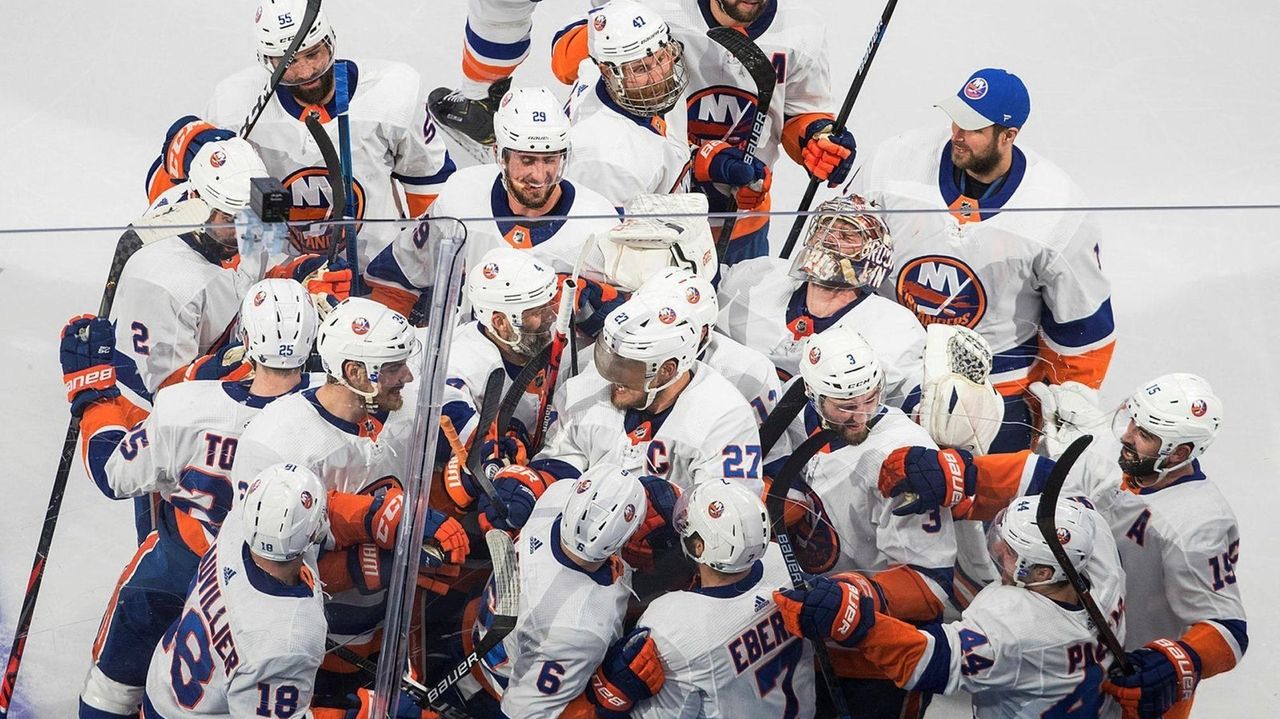 The Islanders, still pumped up from defeating the Tampa Bay Lightning in double overtime in Game 5 of the Eastern Conference finals, on Wednesday said they are aware their backs are up against the wall as they prepare for Thursday's Game 6. Credit: NHL

Ultimately, Thursday night’s Game 6 between the Islanders and Lightning will stand on its own in terms of momentum swings and mounting pressure on either team to succeed in the Eastern Conference finals.

"We look at it as one game at a time," Islanders coach Barry Trotz said on Wednesday. "We have one life left. They have two. You tell me who has more pressure."

The Islanders staved off elimination with a 2-1 double overtime win in Tuesday night’s Game 5 at Rogers Place in Edmonton to cut their series deficit to 3-2.

"That was a big win, a gritty win," Islanders captain Anders Lee said. "When you have a win like that, it’s easier to carry over and you want to maintain that, for sure."

But both teams believe their performance on Tuesday can help them on Thursday.

The Islanders because they won a low-scoring game, something they are very comfortable doing.

The Lightning, who played without top-line center Brayden Point and may be without him again for Game 6, because they liked the way they played and were within inches of a Nikita Kucherov overtime winner and an offside-review away from a go-ahead goal in the second period.

Lightning coach Jon Cooper did not provide an update on Point, who also missed the Islanders’ 5-3 win in Game 3. Cooper said he hoped the Lightning had not seen the last of Point in the playoffs and also left open the possibility he could play in Game 6.

Point’s status in Game 6 will not change how the Islanders will try to play. Trotz switched his lineup to 11 forwards and seven defensemen in Game 5, matching the Lightning’s series-long strategy.

"I don’t know if your approach changes," Lee said. "You still have to attack the game the same way you would any other night. I think we’ve just got to maintain the momentum earned from last night and carry that into the next game. Similarly, our backs are against the wall a little bit and we’ve got to come out flying."

The Islanders are trying to become the 30th team in NHL history to rally from a 3-1 series deficit.

But as far as whether trying to get that fourth win is tougher than trying to rally, neither coach was going to say for sure.

"I think you can stand in each team’s court and make a case because that’s what both coaches are doing," Cooper said. "They’re probably sitting there saying, ‘Hey, we just won in overtime, we’ve got them thinking and the ball’s in in our court, let’s just keep pushing.’ Then, you’re in our locker room saying, ‘Hey’ we’re still up 3-2 and they were a lucky bounce away from the game still going on or us scoring.’

"You can play the tennis match and volley back and forth on what you’re doing to your team," Cooper said. "It’s why we play the games. The players are going to decide it tomorrow night one way or the other. Pressure is what you make of it. If you want to succumb to it, you can. Or, if you want to thrive in it, you can. You’ve got to make a choice. You’ve got to embrace these moments. You don’t get them very often. So, enjoy them and don’t let that pressure get to you."

Rangers trade Buchnevich to Blues for forward Blais and a '22 pick; choose LW Brennan Othmann
Without a first-round pick, it was all quiet on the Islanders' front
Yankees not willing to part with shortstop prospect Volpe
Mets trade for lefty Rich Hill to help fill void in rotation
Megill outpitches Matz, Alonso hits two HRs in Mets' win
After Yanks blow early opportunity, Devers drives in five with two HRs
Didn’t find what you were looking for?