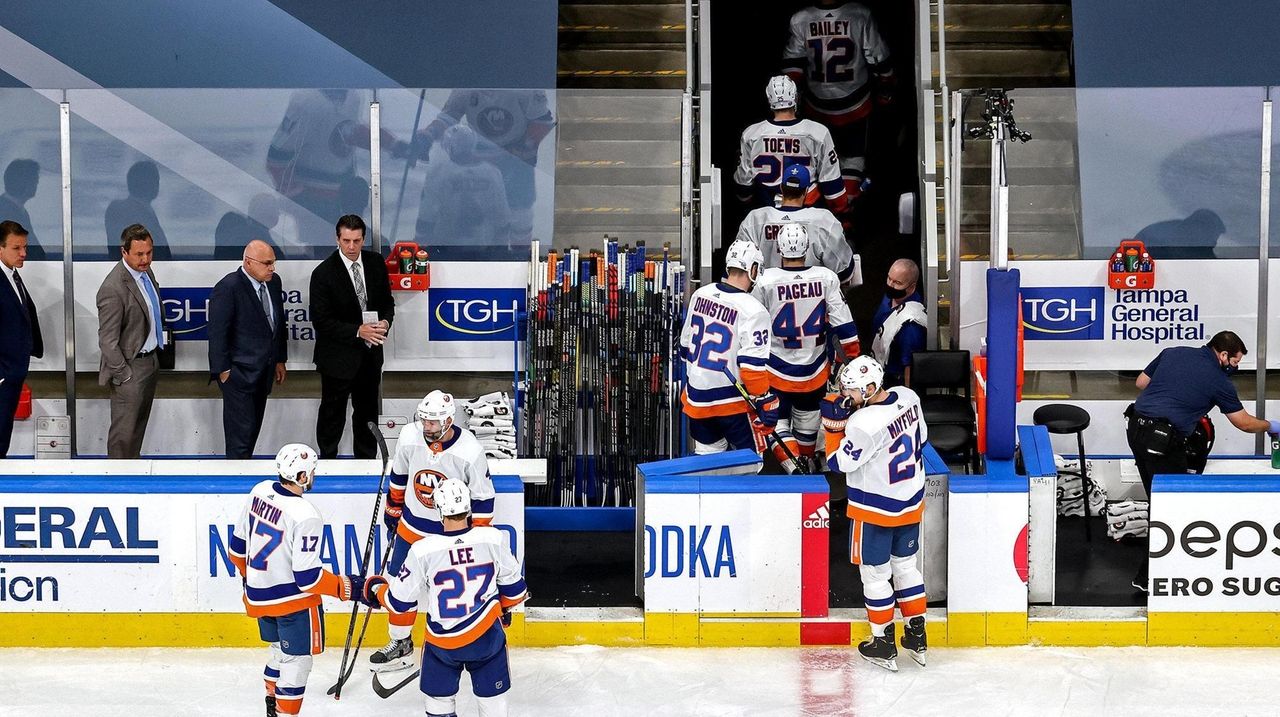 Matt Martin, Nick Leddy and Barry Trotz discussed the Islanders' 8-2 blowout loss to the Tampa Bay Lightning in Game 1 of the Eastern Conference Final on Monday in Edmonton. Credit: NHL

They lost and lost badly. But all is not lost for the Islanders, who certainly appeared fatigued after concluding a seven-game series less than 48 hours earlier and then flying across Canada.

After all, Monday night’s 8-2 debacle at Rogers Place in Edmonton against the well-rested, dangerous Lightning was only one loss in a best-of-seven series. Game 2 is Wednesday night.

“I still have the utmost confidence in this group and, at the end of the day, it’s one game,” left wing Matt Martin said. “I mean, it’s never good to get blown out. It’s embarrassing. We didn’t envision that. Game 2 is now the most important game. We don’t want to go down 2-0 to a very good hockey team.”

Because there’s no doubt the Islanders will be in trouble if they can’t slow down the Lightning with better defense and goaltending.

Host Andrew Gross analyzes what went wrong for the Islanders in Game 1 of the Eastern Conference finals against the Tampa Bay Lightning, plus a look ahead to Game 2 and potential lineup changes.

Thomas Greiss gave up three goals — two on screens — on nine shots after notching his first career playoff shutout with 16 saves in Saturday night’s 4-0 win over the Flyers in Game 7 in Toronto. Semyon Varlamov wasn’t the solution against numerous odd-man rushes in allowing five goals on 25 more shots. Now coach Barry Trotz again has a tough decision to make in net for Game 2.

In all, the lopsided loss spoiled the Islanders’ first game in an Eastern Conference final series since 1993.

“You’ve got to be able to move on right away,” Anders Lee said. “It’s a long series. We dropped the ball tonight. We have an opportunity to get right back at it, fix our mistakes.”

The Lightning, in the conference finals for the fourth time in six seasons, had been off for a week after eliminating the Bruins in five games in the second round, and they arrived in Edmonton from Toronto on Saturday.

Brayden Point (two goals, three assists) and Nikita Kucherov (one goal, four assists) had five-point games, Yanni Gourde added two goals and Andrei Vasilevskiy stopped 23 shots. The Lightning went 3-for-6 on the power play after the Islanders’ penalty kill was 13-for-13 against the Flyers and had gone eight games without allowing a man-advantage goal.

“To me, this game, we’ll wash it away,” Trotz said. “We’ve lost some heartbreakers in overtime, some real hard matches. Sometimes you get it handed to you. It’s still a loss and we’ve just got to regroup. This group has been really resilient the last two years but we’re up against a good team. I know we’re going to be better next game. We’ll raise our level.”

Point made it 1-0 at 1:14 of the first period, breezing past top-pair defenseman Ryan Pulock and shooting around Greiss at the crease. Jordan Eberle, snapping an 11-game goal drought, tied the score at 1-1 at 4:33 on the power play off Lee’s rebound.

But defenseman Victor Hedman’s power-play slap shot from the high slot through traffic gave the Lightning a 2-1 lead at 8:12 of the first period, 33 seconds after Brock Nelson could not get the puck to settle on a shorthanded breakaway.

Defenseman Ryan McDonagh made it 3-1 at 10:46 with a shot from the left circle past a screened Greiss.

“I think it was maybe how you felt to start the game,” Lee said when asked if the Islanders were fatigued. “We’ve been through travel and transitions like this in the regular season and the playoffs before. It just takes a few minutes to get your legs going and then you settle in. I don’t think that was indicative of the whole game.”

Still, it never got better for the Islanders. Once Point’s impressive midair power-play redirection made it 5-1 at 13:18 of the second period, the Islanders knew it was officially a rout. Defenseman Nick Leddy had the Islanders’ other goal at 8:46 of the third period, making it 6-2.

“We would make a mistake, they get a chance, they scored,” Eberle said. “There’s a lot of things we have to correct. We’re a good hockey team. There’s a reason why we’re here.”

Island Ice Ep. 47: Game 1 got away from IslesHost Andrew Gross analyzes what went wrong for the Islanders in Game 1 of the Eastern Conference finals against the Tampa Bay Lightning, plus a look ahead to Game 2 and potential lineup changes. Game 1 photos: Islanders vs. LightningThe Islanders fell to the Tampa Bay Lightning, 8-2, in Game 1 of the best-of-seven ... Best: Lightning a whole different beast for IslesTampa Bay wasted no time showing just how strong of a force it is in 8-2 win.  Isles goalie Greiss taken out in first period, replaced by VarlamovThree Lightning goals in the first 10:46 prompted coach Barry Trotz to make the move.

Jets defense covers for Wilson in win over Texans
Giants' defense comes up big in win over Eagles
Best: Jets QB Wilson notes his inconsistency, trusts in process
Jets' Walter is homecoming king: First TD with family in stands
Jets Q&A: Franklin-Myers makes up for last week's mistake
Grading the Giants in Week 12 vs. Eagles
Didn’t find what you were looking for?