Matt Martin #17 and Mathew Barzal #13 of the Islanders react after Game 3 of the semifinals of the 2021 Stanley Cup Playoffs against the Tampa Bay Lightning at Nassau Coliseum on Thursday, June 17, 2021. Credit: Jim McIsaac

Defense is the essence of the playoffs, limiting skating space and protecting the net. That is how teams win Stanley Cups, as the Lightning did last season. It’s what the Islanders’ success has been built upon and where their chances remain for rallying in this NHL semifinal series.

But on Thursday night before a raucous 12,978 as capacity again was expanded at Nassau Coliseum, the Lightning out-defensed the Islanders and blocked 21 shots in winning Game 3, 2-1, to take a 2-1 series lead.

"They defend well. So do we," said Cal Clutterbuck, who scored the Islanders’ only goal. "If they blocked 21 and we had 30, that’s 50 chances at the net. So keep adding to that number and I think we’ll be fine."

Vezina Trophy finalist Andrei Vasilevskiy made 27 saves, including eight in the third period as the Lightning were content to sit back and defend. Semyon Varlamov stopped 23 shots.

NHL.com's Dan Rosen joins Newsday's Andrew Gross, Colin Stephenson and Neil Best to discuss the Isles' 2-1 loss in Game 3 of the NHL semifinals at the Coliseum.

Game 4 — now potentially the last playoff game at the Coliseum — is Saturday night. The Islanders also faced 2-1 deficits before rallying for six-game victories over the Penguins in the first round and the Bruins in the second round.

"We just have to get more pucks, get inside," coach Barry Trotz said. "We had some chances and Vasilevskiy made a couple of key saves. They didn’t have a lot tonight. I thought we were pretty good defensively as well. You go deeper and deeper, the teams are better and better and you’ve got to dig in even harder and harder."

Only two penalties were called after the teams totaled 54 penalty minutes in the Lightning’s 4-2 win in Game 2 on Tuesday night at Amalie Arena. The Islanders won Game 1, 2-1.

"There wasn’t much room out there," Trotz said. "Both teams are adjusting to each other."

"I think every game has been tough," Casey Cizikas said. "Each team is battling and they want to take care of their own end and limit chances as much as possible. It’s going to be a dogfight out there every single game, and we expected that." 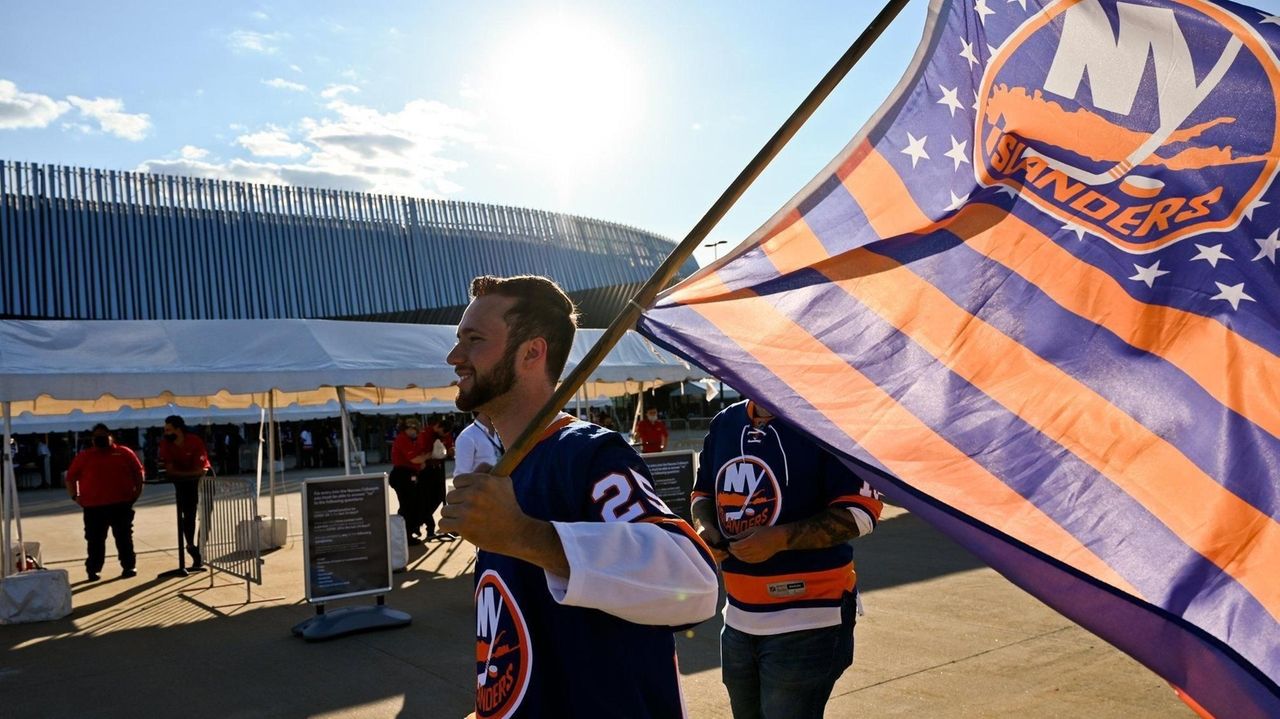 Jean-Gabriel Pageau’s line with Kyle Palmieri and Travis Zajac got the crowd back to deafening decibel levels in the second period after the Lightning’s defense threatened to squeeze the life out of the fans and the Islanders’ attack.

Defenseman Andy Greene, Zajac and then Palmieri — off the left post — produced shots on a shift that ended at 9:28. Before that, the Islanders had 10 shots on net, matching the Lightning’s 10 blocked shots.

The momentum built, with Mathew Barzal nearly tying it from a sharp angle on the right at 14:12 and the game’s first power play as Lightning defenseman Mikhail Sergachev was called for roughing Palmieri at 14:28.

It culminated as Clutterbuck tied the score at 1 at 17:01 of the second period after Vasilevskiy was unable to hold on to Martin’s shot from the left and defenseman Erik Cernak inadvertently pushed the puck to Clutterbuck as he tried to get it underneath his goalie’s pads.

But the Lightning regained a 2-1 lead with 17.4 seconds left in the second period as Brayden Point swiped in the rebound of defenseman Victor Hedman’s shot. Trotz chose not to challenge Point’s goal for interference on Anthony Cirelli because video showed he was pushed into Varlamov.

"We’re a veteran team. I think we try to brush off anything that comes our way throughout a game," Martin said. "It was a big goal to tie the game. Point gets one back not much later but we still felt good about our chances. We’re always going to play with confidence because we believe we’re a good team."

The goal came just as Islanders defenseman Adam Pelech was being released from the penalty box after a questionable interference call against Nikita Kucherov at 17:38.

"I didn’t think there was much there at all," Trotz said.

Yanni Gourde had made it 1-0 at 10:05 of the first period after Blake Coleman collected his own rebound and sent the puck off Nick Leddy’s skate to the right post.

Island Ice Ep. 100: Isles-Lightning Game 3 analysis NHL.com's Dan Rosen joins Newsday's Andrew Gross, Colin Stephenson and Neil Best to discuss the Isles' 2-1 loss in Game 3 of the NHL semifinals at the Coliseum. Best: This deficit seems a bit more daunting for IslesAsking the Islanders to win three out of four games in the Stanley Cup semifinals against the defending champs is asking a lot. Game 3: Islanders vs. Lightning photosSee the scenes inside and outside the Coliseum for Game 3 of the NHL semifinals. Isles fans tailgating outside Coliseum before Game 3Check out the scene at the Coliseum as Isles fans gathered for Game 3.