Barry Trotz of the Islanders looks on against the Philadelphia Flyers during the first period in Game Seven of the Eastern Conference Second Round during the 2020 NHL Stanley Cup Playoffs at Scotiabank Arena on September 05, 2020 in Toronto, Ontario. Credit: Getty Images/Elsa

Barry Trotz doesn’t coach by throwing the proverbial spaghetti against the wall.

But lineup and line combination changes are possible for the Islanders’ win-or-else Game 5 of the Eastern Conference finals against the Lightning on Tuesday night at Rogers Place in Edmonton.

"We’ve had long discussions on what’s right, what needs to be changed," Trotz said on Monday after an optional practice. "I think we’ve pushed a lot of the right buttons. We didn’t panic when Philadelphia came back from a 3-1 deficit [in the previous round]. We made subtle changes and got our guys to focus on the game. We’re doing the same thing.

"We don’t want to just blow everything up. It doesn’t show a lot of trust in what we’ve done so far. It didn’t happen by throwing spaghetti on the wall and making up stuff."

Still, any potential changes may be more than cosmetic with his top trio of Mathew Barzal, Jordan Eberle and Anders Lee combining for one goal and four assists in the series. The Lightning’s No. 1 line of Brayden Point between Nikita Kucherov and Ondrej Palat had two goals and four assists in Sunday afternoon’s 4-1 win in Game 4, which pushed the Islanders’ season to the brink.

Overall, that Lightning trio has eight goals and 12 assists in the series.

"We’d love to be producing more than we have," Lee said. "A big part of our team’s lineup is everybody’s got to chip in in some form or fashion. Our line has been dry of late. Tampa has done a good job of limiting us.

"Personally, I just think it’s a matter of putting the puck in the back of the net and creating high-danger scoring chances," Barzal said. "I don’t think we’ve had enough of that. I thought our possession in the offensive zone has been pretty solid, but nothing really high danger where a shot is a serious threat."

The Islanders, in their first conference finals since 1993, hope to extend this trip longer than their last one, when they were eliminated by the eventual Stanley Cup champion Canadiens in five games. 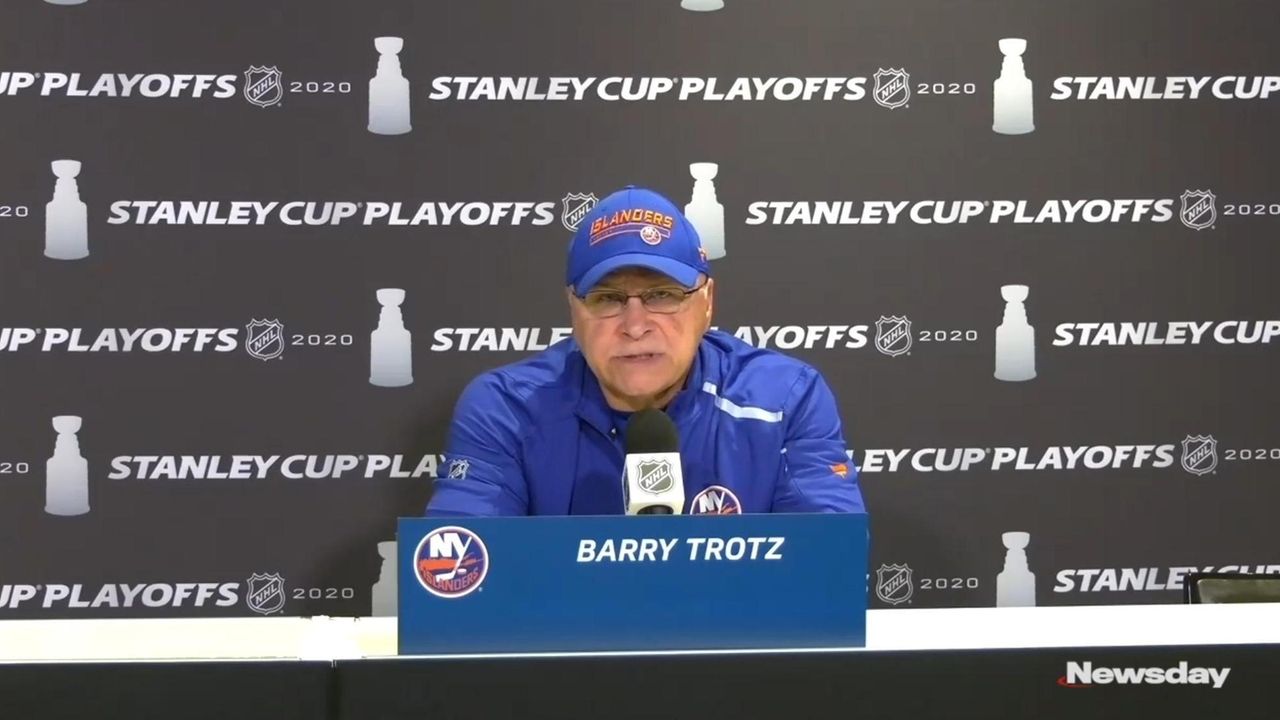 Isles talk facing elimination ahead of Game 5 vs. Lightning With the Islanders trailing the Tampa Bay Lightning, 3-1, in the best-of-seven Eastern Conference finals, head coach Barry Trotz, Mathew Barzal and Anders Lee discussed the state of the team on Monday, Sept. 14, 2020, ahead of Tuesday's scheduled Game 5. Credit: NHL

The Lightning, in the conference finals for the fourth time in six years, last advanced to the Stanley Cup Final in 2015, when they lost to Chicago.

It certainly will be interesting to see what changes, if any, Trotz opts to make in Game 5.

His options are somewhat limited with fourth-line center Casey Cizikas out for the rest of the playoffs — and out of the Edmonton bubble — with an undisclosed injury.

He could break up Barzal’s line but likely would want to keep Brock Nelson’s line with Anthony Beauvillier and Josh Bailey — the Islanders’ most consistent throughout the postseason run — intact. Versatile Jean-Gabriel Pageau has centered Cizikas’ usual linemates, Cal Clutterbuck and Matt Martin, the past two games and Derick Brassard was in between Ross Johnston and Leo Komarov in Game 4.

And it’s not necessarily line combinations that could be changed. Trotz also might be considering alterations to his two power-play units with the Islanders 1-for-14 in the series.

Island Ice Ep. 51: A bit of a downer Andrew Gross, Colin Stephenson and Neil Best recap the Isles' Game 4 loss to Tampa Bay in the Eastern Conference Finals and look ahead to Tuesday night's Game 5.

The Giants' offensive line has four coaches . . . for five positions
Biggest obstacle for Giants' Toney: Dealing with loss of grandmother
Breaking down Garrett's 'Coach' exchange with reporters
Sanchez the next Yankee to test positive for COVID-19
Mets lose to last-place Marlins to set up showdown with Phillies
Source: Randle agrees to contract extension with Knicks
Didn’t find what you were looking for?